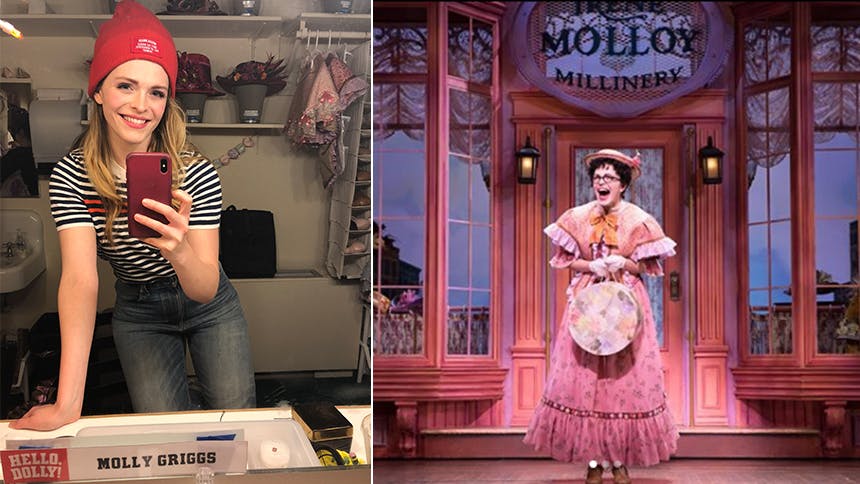 Molly Griggs makes a sensational, hilarious Broadway debut as shopgirl Minnie Fay in the Tony-winning revival of Hello, Dolly!. She lands laugh and after laugh all night long, from her opening monologue to her must-watch facial expressions during "Elegance". Below, BroadwayBox gets to know Molly as she talks about making her debut opposite Bernadette Peters, finding her own Minnie, and the touring production that remains one of the most rewarding experiences of her life.


1. Who was the first person you called when you found out you’d be making your Broadway debut as Minnie Fay?
I called my mom first. She was in a meeting and she stepped outside to take the call. I was crying on the phone so she was worried something was wrong, but when I told her she started to cry too! I called my dad right after telling my mom—he was driving home from work and nearly wrecked the car when I told him.

2. What do you love most about working with co-stars Kate Baldwin & Charlie Stemp?
They are two of the sweetest people on the planet. Kate is so funny and cool, and such an incredible actor and singer. She really is everything I want to be. Charlie is mischievous and silly, and we have a fun, sibling-like relationship. I feel so lucky to work with them everyday.

3. What was your reaction the first time you saw yourself in Minnie’s wig and glasses?
The first time I put on my wig and glasses I think I screamed with delight. I love wigs because when you put them on and you're automatically transformed. I adore my Minnie wig, and I'm so thankful to our wig supervisor, Heather Wright, for setting all those silly curls for me everyday.

4. How did you go about creating a Minnie that was your own?
I actually had never seen Hello, Dolly! in any iteration when I auditioned for the Broadway production. So I just leaned into the things about Minnie that seemed funny and truthful to me and hoped for the best. In rehearsal with Jerry Zaks, he helped me continue to discover funny bits and shape the arc of the character. Each show I discover new stuff, and it's been so much fun to work on.

6. Tell us a bit about touring Jane Doe. Was it an incredibly powerful experience to bring this piece to college campuses?
Working on Jane Doe has been one of the most rewarding experiences of my life. Jane Doe is a theater piece that reflects on rape culture in our communities. We've toured the show since 2016 , and it feels more important now than ever in the wake of the #metoo movement. The show has been very impactful for our audiences, and I hope that it will continue to educate and empower all genders to end sexual violence and harassment. You can learn more about what we do at wearejanedoe.org

7. What do you love most about being part of a big, Broadway revival like Hello, Dolly!?
It's thrilling! Being part of this show is a dream come true. I never imagined making my Broadway debut alongside Bernadette Peters, one of my heroes. The cast and crew are incredible, the audiences are wild, and I feel insanely lucky.

8. What’s your favorite thing about life backstage at the Shubert?
We are a big family. My favorite part is hanging out with the cast and crew and making each other laugh.

9. Tell us a memorable audition story.
I was recently auditioning for a new musical, and my best friend from childhood was there auditioning for the same part! We thought it was hilarious and we spent the entire callback trying to crack each other up. It made me feel so grateful for my friend and for this weird and wonderful business we're in.

10. What would Carnegie Mellon-aged Molly say if you were to tell her she’d make her Broadway debut opposite Bernadette Peters?
Oh, she would have probably passed out.

Hello, Dolly!
Best Priced Tickets
Newer
The New Smokey Joe's Café Is Going to Be Lit AF! Just Take a Listen to the Insane Singers They Cast
Older
Once On This Island Star Lea Salonga Reveals the Stories Behind Her Disney Hits, Miss Saigon, Les Miserables & Other Beloved YouTube Videos
Sign up for BroadwayBox Discount Alerts