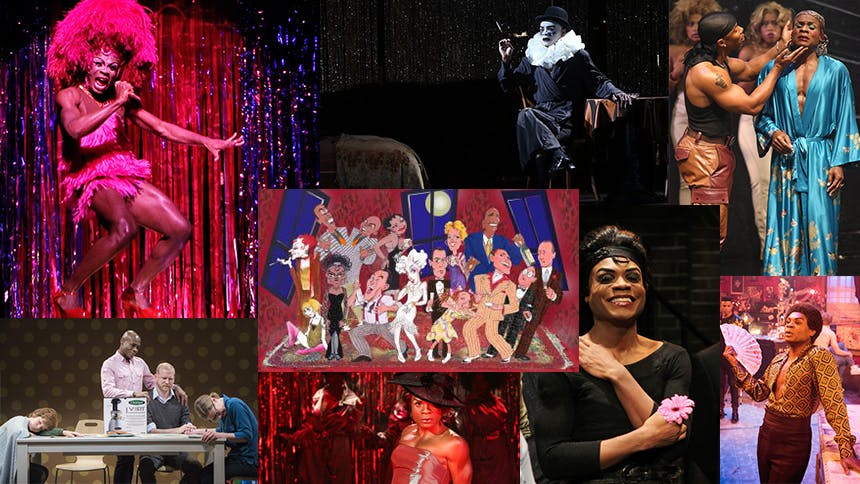 . For his incredible performance, he received a 2017 Lucille Lortel Award nomination for Outstanding Featured Actor in a Musical. He plays his final performance at off-Broadway's Lynn Redgrave Theater on May 21.


Scroll on as NLG shares with BroadwayBox his Broadway scrapbook—filled with fabulous stories and killer photos from his stage career.

The role of Willie was written for me so that’s always so incredibly inspiring. Now listen, true time—no alternative facts from Nathan Lee Graham—a lot of things have been written for me but they are not always great. I’m so grateful that people are inspired by anything I do—all those antics I do. This just happened to be really wonderful. Max Vernon has done something so beautiful and rare where he’s the librettist, composer and lyricist. He’s coming from a place of his own truth and really took the time to go in, if you will, and make it something special.

Willie resonated with me, not just because his fabulous nature—and Willie is fabulous and he is effervescent. He’s the Dolly Levi of The View UpStairs. He always tries to bring people together and make things just right, and put a nice little bow on it. Even to his detriment. He does alternative facts quite often, but he uses them to make the world better. He sees the world through rose-colored glasses, even though he’s completely aware of what’s really going on—but that’s how he survives. He’s Dolly Levi but he’s also Blanche DuBois. He has wonderful notions of romance and love and sailors coming in. He’s fun in that way, and I love him. That’s why I’ve stayed with the project over the years. 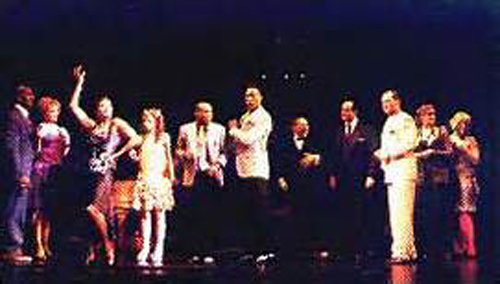 The Wild Party was technically my Broadway debut—even though Showboat was but we don’t count that. The confluence of George C. Wolfe and Michael John LaChiusa (and then doing it with friends ) was just incredible. Then you add on my actual idol, Eartha Kitt…well my head exploded. Then, of course, we became friends. It was such a trip and such a pleasure. My journey with that piece was wonderful from beginning to end. It introduced me to the New York stage in a real, cognitive, special way with a singular, iconic score. Everyone was at the top of their powers.

Michael McElroy and I worked damn hard on sounding like a 78 record from the 1920s. We worked diligently on getting our vibratos very fast and getting that vaudevillian style. Day in and day out. Everything was so authentic, down to our period underwear by Toni-Leslie James. It just set the bar so high. It was very special. 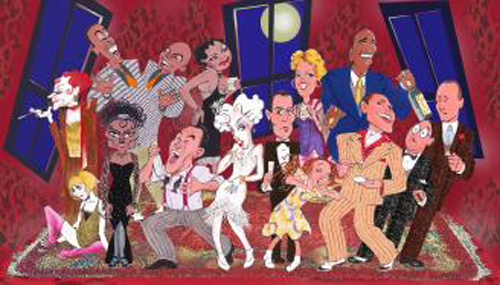 That was a drawing that was inspired by a random artist and it was sent to us. Each of us have a copy. It’s really captures the whole moment there. Ben Stiller was in the audience for the final performance of The Wild Party and the very next day he called and said, “I’m doing a project called Zoolander and I’d like Nathan to do it. I don’t have the part written yet but I want to know if you’ll do it.” So, there you have it. 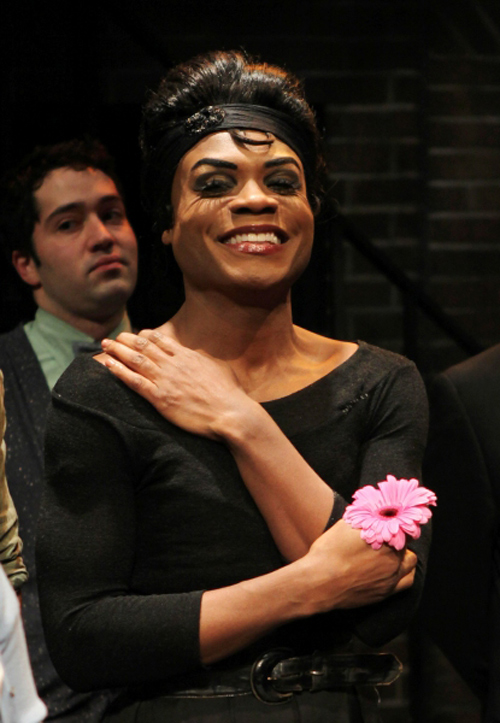 I loved the history of Hit the Wall—we did it at the Barrow Street, a stone’s throw from Stonewall. The historical significance was a big deal. I love history. It’s a mission of mine to play gay roles with dimensions and to make each a fully actualized human being. I consider myself to be an artist activist now. If the part is written well, I want to do it. We need to be represented everywhere all the time in every idiom.

I was under the impression Miss Understanding, the role I was auditioning for, was sort of a narrator—that’s the way it was explained to me. In other iterations of the show (in Australia and London), she opened the show and closed the show. I thought, “Ok, that’s a sweet gig!’ But of course as things are getting cost effective they wanted me to do a little bit more and so I had some ensemble tracks; and it was a hard decision for me. If I take this it’s sort of going backwards but I want to be in New York. I’m so glad I took it. The show brought such joy to everyone. I did 645 performances in a row—I never missed, not one day.

I had a 12-minute opening at the Palace Theatre, and I’m a lover of Judy Garland so that I performed at the Palace by myself for 12 minutes was all I needed. It turned out to be such a jewel and such a gem.

That was pure gold. Billy Porter and I are friends. [He directed it.] It was extraordinary really. Then cut to me winning the IRENE award for Best Supporting Actor in a Play. Billy and I are dear, dear friends, and I can’t say enough about him. We’re soul mates in that way. He’s always supported me and I’ve always supported him, and that will go on for the rest of our lives.

I believe I am the one of the first African Americans to play the Emcee in a major production. But I did research and there were Emcees in the Weimar Republic who were of color. They had many of them in Germany and Paris at that time. It would not have been uncommon for an American like Josephine Baker to go to Europe and reinvent themselves in this kind of way. I had a whole scenario that this guy was from St. Louis (like myself or Josephine Baker) and went to the Folies Bergère and then crossed the channel and started doing his thing over there. Research is a big part of my process–it makes everything so much richer if you go a little bit deeper.

41-derful was a wonderful play we did at The Wild Project. It was a part of a theatre festival. It was a wonderful opportunity for me to do a straight play. I was like, “You mean I don’t have to sing at all?!” All props to [writer and director] Jenny Schwartz. I hope we can do that play again. It was an absolute pleasure to do a play.

Wig Out! is incredibly special for me because I was at a very dire place in Los Angeles. I was having relationship issues with a partner and I wanted to leave Los Angeles. The partner I was with said, “If you love me you won’t leave Los Angeles.” So, I was turning down a lot of work in New York as a result but finally I said, “This is insanity!” Then my New York agent said to me at the time, “Do you want to work? What’s going on with you? There’s this wonderful part in a play called Wig Out! by this up-and-coming playwright Tarell Alvin McCraney.” She sent me the script, I read it, and I had to do it. But I was terrified because I hadn’t been on stage in years. I didn’t know if the community would accept me. All these genuine fears. For the first time in my life, I had stage fright, And the role demanded so much of me physically and mentally. It turned out to be one the best experiences in my theatrical life. 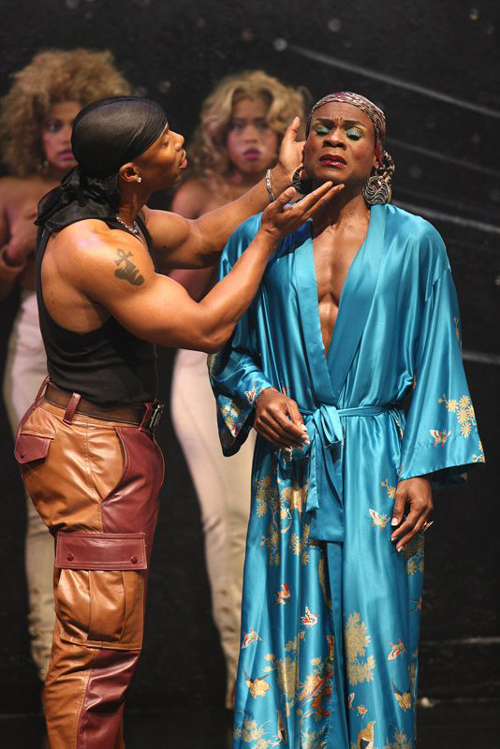 I did everything I could do to discover and find her. I went to balls. I researched on my own the whole history of balls and voguing and how it morphed over time. Wig Out! really was a very special experience for me personally. It reestablished my confidence in myself as an actor.

The most special experience for me is that Wig Out! was one of the last shows Eartha saw. She was very excited for me to move back to New York. She would leave me these voice messages, and against doctors’ rules she had a driver take her from Westchester to come to my opening night. Toward the end of the show she burst into the dressing room, “Naaattthhaaann” with such flourish. And everyone gagged. It was so special to me. I’ll never forget it was my return to the stage and my idol came to see me. She said to me, “Nathan, there are a lot of people who do me and they can’t; but you, you could do me.” That was special. 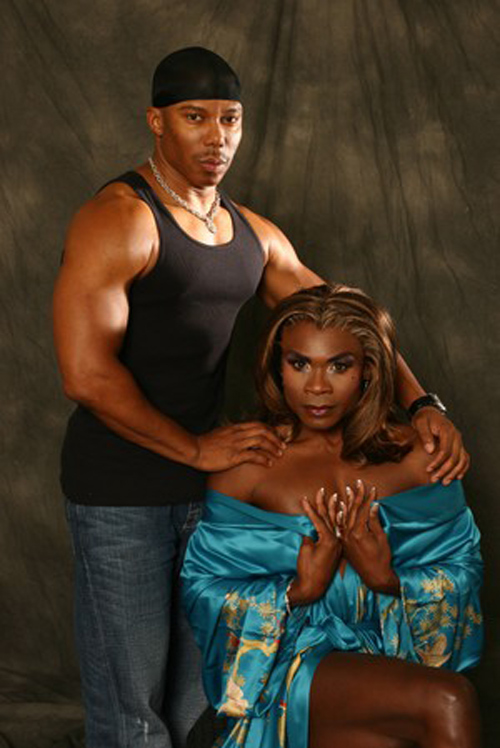 It became one of the biggest shows ever at the Vineyard, but it was the height of the recession so it didn’t move, which was disappointing. There was a hope it would move but they thought it was too risky. I would absolutely play this role again. I did another reading of it with Tarrell a year or two years ago. There’s some rumor it’s supposed to happen again.

Don't miss Nathan Lee Graham in 'The View UpStairs' running off-Broadway through May 21.