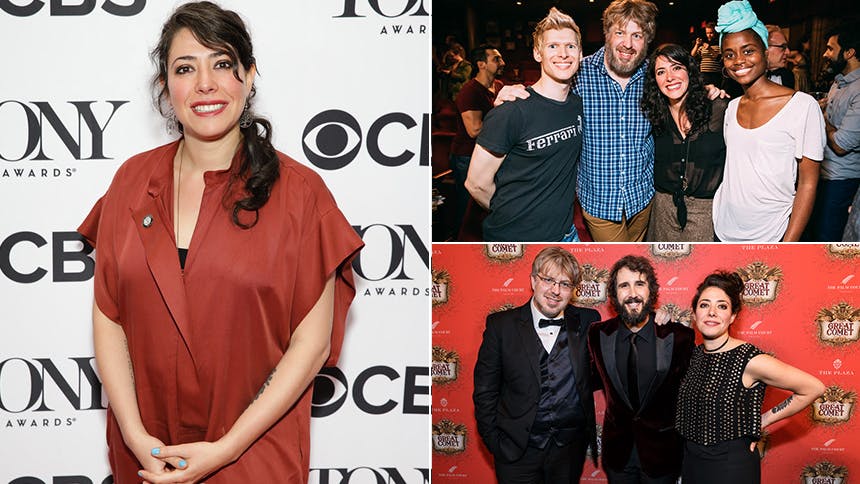 OBIE-winning director Rachel Chavkin makes her Broadway debut at the helm of the most Tony-nominated show of the year, Natasha, Pierre, and the Great Comet of 1812. Chavkin received a nomination for her incredible direction that transformed Broadway's Imperial Theatre into an immersive, Russian oasis you never want to leave or look away from. A founding member and artistic director of the TEAM, Chavkin's other recent off-Broadway triumphs include the acclaimed plays and musicals Small Mouth Sounds, Hadestown, The Royale, Preludes, and Three Pianos.

Scroll on as BroadwayBox chats with Rachel Chavkin about adapting Comet for each iteration, finding fresh talent, and the responsibility of female artists and producers.

1. Outside of your work with the TEAM, how do you know when you are the right fit for a project? When did you know for Comet?
Comet was immediate because of Dave. This was our third project together, and by that point in our collaborative relationship, I already knew I'd jump into any project of his. At this point I'm led partially by relationship—Bess Wohl, for example, who wrote Small Mouth Sounds, could tell me I need to meet her in Alaska tomorrow and I'd be there. I'm also led by a writer's ambition, whether it's formal/aesthetically daring in terms of language and imagery, or it's political or spiritual aims of the show.


2. What’s a “kill your darlings” moment you had through the years with Great Comet? How did you know it was the right decision?
Actually I had one mid Broadway run: it's much harder to get a quiet chuckle on Broadway. Audiences seem to want to laugh if something is the slightest bit funny. And there was a moment during the big fight between Pierre and Anatole where Pierre has the lyric, "Pierre closed the door and addressed Anatole without looking at him." After that there's a series of heavy chords that get pounded in this kind of Jaws vibe. And I used to have Pierre turn his head sharply away after staring down Anatole on the first chord. This had always gotten a nice, “hm" off-Broadway, in a way that showed we were consciously playing with the narrative form while not losing the stakes of the scene. But on Broadway it became a huge laugh line—my producer was the one who raised this. And he was totally correct; it was undercutting the stakes of one of the most tense moments in the show. So I spoke with Josh and we altered the texture and timing of the turn to remove the laugh. I loved it. But it was too clever for the moment.

3. Can you share an example during The Great Comet process when you heard no but prevailed anyway?
This sounds pretty apple-pie, but Comet is the show that it is because from Jason Eagan and Jeremy Blocker at Ars Nova, to Janet and Howard Kagan and Paula Marie Black (our lead commercial producers), to Diane Borger and Diane Paulus at A.R.T., we have rarely been told no. We've always been urged to follow our artistic instincts to the fullest. So the few times it's happened, like when we wanted to do something even more radical with the seating at the Imperial, it's been fairly easy to take and adjust to new solutions because there's good reason for the "no"...like physics, or NYC building code.

4. As an audience member, what’s a night you had in the theatre that was unforgettable and inspirational?
Oh I've had a ton. I see theater 5 or 6 nights a week when I can. I love it, and tend to find even the stuff I don't love inspirational...or at least motivational in some way. I've never recovered from seeing my first Wooster Group show, which was House/Lights when I was a freshman in college. And recently I was just floored by both productions directed by Sam Gold on Broadway this spring, Doll's House Part Two and Glass Menagerie.


5. Between Comet, Small Mouth Sounds, The Royale, and Hadestown, you’ve introduced New York to some really interesting and dynamic talent recently. What’s your casting process like?
I kind of spend my life casting, which I don't think is uncommon for directors. I see stuff, and I'm constantly making notes to myself about performers I love. No one is right for every project, and there's no better feeling than finding the right alchemy between an actor's and a character's DNA. I think about spiritual metabolism and tone, how language sits in that performer's mouth, what I've seen them do or not seen them do. And of course casting directors are essential to all this—I've been introduced to so many extraordinary artists via smart casting directors.


6. What job really kicked your ass, and what’s the biggest thing the experience taught you?
I mean...Comet. To this day. It's nourishing and it keeps kicking my ass. It's maybe a particular challenge because so many people in the company are making their Broadway debuts, including me. So we're all learning the muscles and systems it takes to handle a long running show. I just didn't really know what a Dance Captain does, for example. Miraculously we have had four extraordinary performer/leaders in this or Associate Dance Captain role. It's a whole other ball game, and much of what I've learned is about maintaining health backstage, as well as the responsibilities I've never had to think about before, like casting replacements or designing a tour. The show remains a daily (if not hourly) presence in my work life.


7. Many young female artists look to you as aspirational. What advice would you have for them? What do you want them to know about your journey?
I am suspicious of giving advice generally. What I can say is it took me years to understand, and still today I struggle, that I have to have my dream list of projects ready for whenever someone has given me the opportunity to talk about it—whether in gauzy conversation or specific pitch meetings. I don't know why I was so slow...maybe because I can be so work intensive that I fear coming on to strong in an initial meeting...maybe because I spent the first 10 years of my career self-producing the weird stuff I wanted to make with my company, and so I never thought that was what I'd get hired to do by someone else. And I'm learning it really can be a self-fulfilling prophecy. I would also say that I haven't often experienced overt sexism—instead I just don't know what rooms I haven't been invited to, or what jobs I haven't been considered for. The opportunity gap is real, and either parity is a core value or it's a nice-sounding but thin talking point—and female artists and female producers have as much responsibility as anyone to addressing that gap through our hiring practices and project choices.