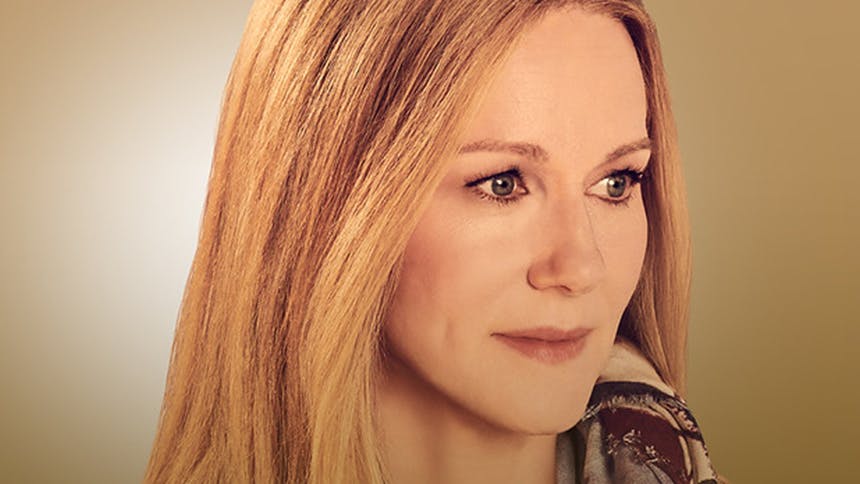 Laura Linney is one of the most celebrated actresses working today. She won four Emmy Awards and two Golden Globes, and she’s been nominated for two Oscars and four Tony Awards; her most recent Tony nom came in 2017 for playing the roles of both Regina Giddens and Birdie Hubbard in the MTC revival of Little Foxes. Now, the Ozark star returns to MTC in the New York transfer of the acclaimed solo play My Name Is Lucy Barton

. Laura plays Lucy, a New York writer, and her estranged mother in this stage adaptation of the bestselling novel about a complex mother/daughter relationship.


BroadwayBox recently caught up with Laura to discuss bringing the new play from London to New York, the biggest challenge of her career, and appearing in the upcoming Downton Abbey movie sequel.

1. What is it about Lucy Barton, her mother, and their relationship that made you want to continue to tell this story and to tell it on Broadway?
Well, I love it, number one. And I felt like the act of doing it is something that doesn't get good overnight. So, I was just happy to have the time to do it. That's the thing about the theatre that film and television does not have—time. You have the time to develop something, and to learn from it, and to listen to it, and to shift, and to grow, and to become more secure within it. It all deepens with time. So, the more I get to do it, hopefully the better it will be and the richer it will be. It's been nice being able to take a few months away and then come back to it, because it sort of hibernates in your bones a bit. And, it's a beautiful story; it's exquisite writing; and I just love it.

2. Speaking about theatre versus TV and film, is there a difference between the way you pick projects for the theatre versus the way you pick your TV and film projects?
That's a good question, I've never thought of that. It's always about the people. It's really about the people and the material. Then, if you have the luxury to be picky, then night shoots don't help, and far away from home can be difficult, or exciting depending upon your life, but in New York, this [theatre] is home.

3. A one-person show is a huge challenge…
It's crazy!
Which role has been the biggest challenge for you up until this point in your career?
Oh, The Little Foxes. Going back and forth between those two, definitely.

4. I love Tales of the City. What's it like to revisit and check in with Mary Ann Singleton every so often? It’s such a rare opportunity for an actress.
Thank you. It's wonderful. It's also amazing to see what's happening culturally now. Now is very different from when we first started 25 years ago. There are new initials; there are new identities; there's a new understanding; there's a new reckoning that's happened. It's wonderful to be able to check in with that.

5. Finally, so many people associate you with Downton Abbey, even though you never appeared on the hit series.
Isn't that bizarre?
Have you been approached to be on it? Would you consider appearing in the upcoming film sequel?
I think it would be too weird for me to be in it. I think that would be a little strange. It would be a distraction. I don't think I belong in there at all—I'm just a fan like everybody else.

Don’t miss Laura Linney in ‘My Name is Lucy Barton’ at the Samuel J. Friedman Theatre through March 1, 2020.