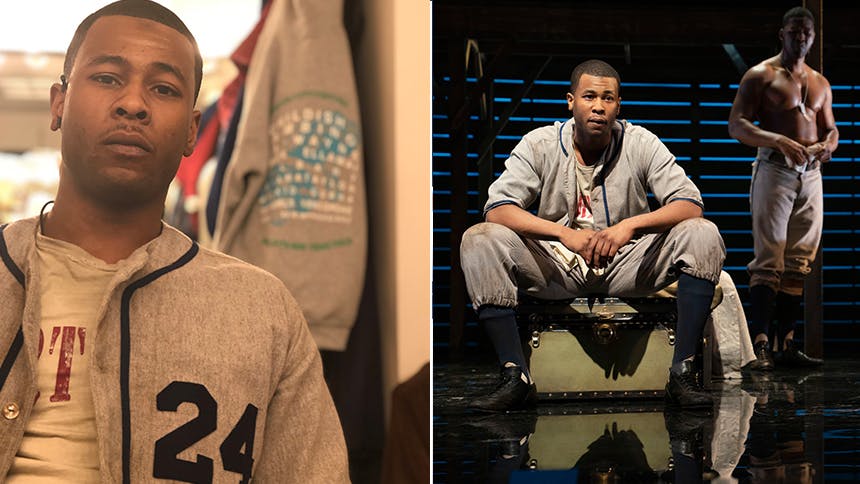 . The play is murder mystery set on a Louisiana Army Base in 1944, and C.J. Memphis is a likable guy from the South, a former baseball player, and a frequent target of the recently-murdered Sergeant Waters (David Alan Grier).

BroadwayBox recently got to know the rising star (who previously led off-Broadway's Paradise Blue) a bit better as he talked with us about the power of A Soldier's Play, bringing his own, fresh perspective to C.J. Memphis, his new TV series, and his beginnings as a street drummer.

1. What was your first reaction when you read A Soldier’s Play? What spoke to you about it?
I was very inspired by Charles Fuller when I first read A Soldiers Play. I was taken aback by the fact that a play written in the 1980’s about the 1940’s still felt so relevant today. The play spoke to me in many ways. One being that we must continue to be aware of the layered systemic racism that’s alive and well in our country today, in the military as well as in our own communities.

2. What did you do when you found out you’d make your Broadway debut as part of the first Broadway production? Who was your first call?
I was very excited when I found out I would be making my Broadway debut as C.J. Memphis. I celebrated with my agents at CESD and manager at AC management with a bottle of champagne. My first call was to my beautiful fiancée, Nafeesha.

3. What was the most illuminating thing director Kenny Leon told you that informed your performance?
Kenny Leon is a great director. One of the best notes I received during this process was based around his admiration of the honesty I brought to C.J. as a Black man from the South. In other productions, C.J. is often played as a man with mental challenges. Kenny and I, both being from the South, agreed that was an unnecessary narrative. C.J. is a philosopher, a man who knows his roots.

4. What is it like sharing those scenes with David Alan Grier? What do you enjoy about him as a scene partner?
D.A.G. is by far one of the most genuine actors I’ve ever worked with. From the first table read, we immediately made a connection. We push each other to be as open and honest as possible on stage. Always “breathing and believing” as my good friend and wonderful actress Miriam Hyman would say.

6. What was the highlight of filming your new Starz series, P-Valley? What was it like filming as a series regular?
P-Valley is going to change lives. I’m looking forward to sharing “Lil Murda” with the rest of the world. Being on set as a series regular just about every day for 6 months wasn’t easy, but by far the most rewarding experience of my career thus far. Having my son Bryce visit Tyler Perry Studios and hang out with me on set was the highlight of the entire 6 months.

7. How did you first get into percussion? Do you still find time to play?
I started playing the drums at the age of 4. My mother and father invested in my talent through my childhood and teenage years. I was in marching band, and growing up in the church had a huge influence on my playing. I started street drumming, using buckets, pots and pans, back in 2012 when I still lived in North Carolina. I needed a way to make extra money while pursuing my acting career, so I would street drum 2-3hrs a day on the streets of Chapel Hill. Once I moved to NYC officially in 2014, I brought my bucket set with me and continued my journey as a street drummer while auditioning and working in the city as a full-time actor. I still find time here and there.

8. What set you on the path to performing professionally? How did you know this is what you wanted to do?
I started acting in college at North Carolina Central University in 2008. I knew immediately after my first play that I wanted to make a living as an actor. I dropped out of school and started to work professionally in the community and regional theaters around the country. I moved to New York in 2013 and the rest is history.

9. What’s your favorite film of all time and what connects you to it?
Hook starring Robin Williams is by far my favorite movie of all time. It made me believe I could be and do anything I wanted to do. I didn’t know I would be an actor when I first saw it but looking back, I can tell it had a huge influence on my life as an artist.

10. You have a pretty heavy character arc in the show. How do you prepare to take that journey each night? How do you leave it behind when the show’s over?
Every night I take time to warm up and meditate before going on stage. I rely heavily on my ancestors and the energy in the power of storytelling to carry me through. After the show, I like to listen to music and relax my thoughts before leaving the dressing room.