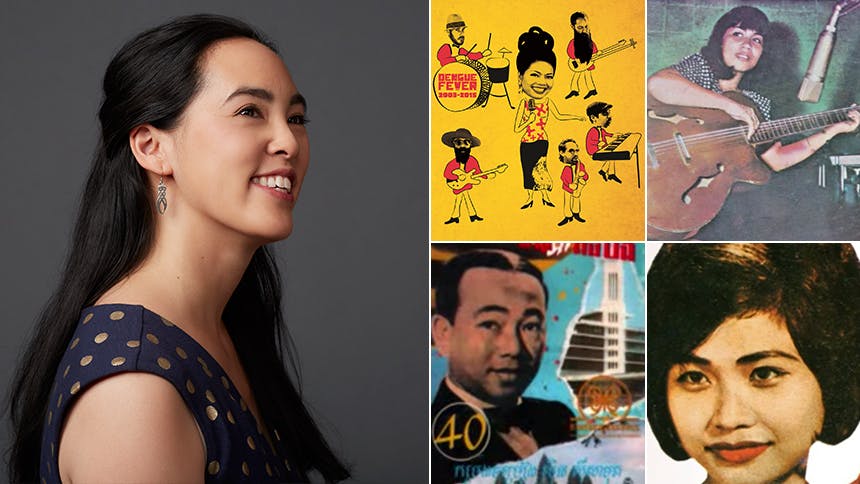 
Since Cambodian surf rock music is such an integral part of the thrilling new piece, BroadwayBox asked the Steinberg Playwright Award and Horton Foote Prize-winning playwright, Lauren Yee, to share with us five songs to listen to as an introduction to the world of Cambodian Rock Band. Here are her picks.

"One Thousand Tears of a Tarantula” by Dengue Fever


This is the song that started it all. Long before there was a play or even the idea for a play, I heard LA band Dengue Fever play this song live at a music festival in San Diego. Given Dengue’s unique blend of Cambodian (or Khmer) psychedelic surf rock, pop, and garage, I’d never heard anything quite like it before. I immediately went home that night and went down the rabbit hole of learning about Cambodia’s ‘70s surf rock music scene and the fate of all those musicians once the Khmer Rouge took over the country.


This song is one of Cambodia’s most enduring pop hits, written by Yol Aularong, the “bad boy” of the Cambodian rock scene, a non-conformist with a subversive sense of humor. Yol is thought to have perished during the Khmer Rouge years (along with 90 percent of Cambodia’s musicians of the time). We actually added this song to the show after I named the fictitious band in the play “the Cyclos,” so it’s more of a coincidence that this song and the band’s name are the same. I have to credit our arrangers (music director Matt MacNelly and actor/keyboardist Jane Lui) for creating a version of “Jeas Cyclo” that really makes the show come alive.


Arguably one of the most popular songs in Cambodia in the ‘70s, this song was popularized by Ros Serey Sothea, one of the leading female artists of the day. Very little of her music remains, as a majority of her master recordings were destroyed by the Khmer Rouge. The song’s carefree message of being young and in love with life haunts me given her presumed death just a few years later.


Sinn Sisamouth was considered the crooning king of Khmer music from the 1950s to 1970s and was a prolific songwriter who championed many up-and-coming artists. This song opens act two and serves as a soulful requiem for what was lost during the Khmer Rouge years. “Champa Battambang” became part of the show thanks actor Joe Ngo’s parents, who grew up in Battambang, Cambodia and loved the song.

“You’ve Got a Friend” by Pou Vannary


This song isn’t featured in the show, but it’s a cover of Carole King’s “You’ve Got a Friend” by singer/songwriter Pou Vannary, whose career was just beginning when the Khmer Rouge took over. The recording also shows the influence of American radio on Khmer music during the Vietnam War years. Pou frequently accompanied herself on acoustic guitar and played in both English and Khmer.

Newer
Can We Talk About Roe Hartrampf? See the Real-Life Prince Charming Playing Charles in Diana
Older
Get a First Look Video from the New Off-Broadway Hit Emojiland
Sign up for BroadwayBox Discount Alerts