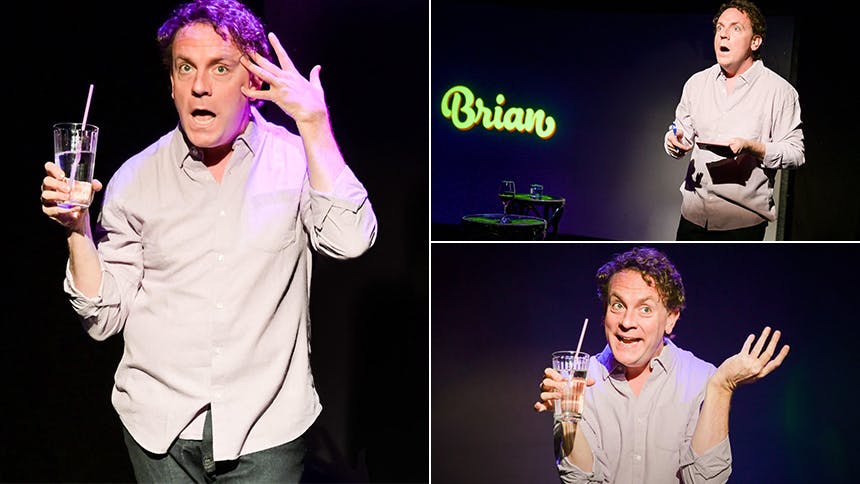 . A follow-up to his acclaimed, sold-out hit Bright Colors and Bold Patterns, this new comedy takes place at Doug’s 41st birthday party and features the gay friends past, present, and future who turn up to celebrate. The result is an absolute hoot, and a must-see moment this month.


BroadwayBox talked with Drew about the new show, his Golden Girlz Live show, and writing for RuPaul and Latrice Royale on AJ and the Queen.

1. For those of us who loved your last show Bright Colors and Bold Patterns, what can we expect from Happy Birthday Doug? Are the pieces connected in any way?
Well a little bit yes and no. It's flipped so instead of one person talking to multiple people [like in Bright Colors and Bold Patters], in this show I'm playing multiple characters talking to one person. It's a birthday party for this guy Doug, who's turning 41, and I'm playing eight different gay men of different ages, shapes, and sizes at the party who all get their time with Doug. It's all happening in the moment, in the heat of a party. It was something where I really wanted to continue in that theme of Bright Colors about gay relationships and friendships but I also wanted to expand. I wrote Bright Colors six or seven years ago now, so I wanted to sort of grow up. I wanted to do a birthday and something about getting older and curating your friendships—letting people go with love and holding onto the people that really matter in life. As I've gotten older, that's one of the biggest things I've learned: it's not about how many friends you have and how many people you know but how important the few really close to you are.

in LA that was absolutely stunning that blew my mind. But I would have to say Scrooged, Bill Murray's version. I watched that again recently with my family over the holidays this year. I saw it when I was a kid, and it just has always stayed with me. There are moments that are so blisteringly funny in it, but it also has such a heart. It's a beautiful message.

3. Tell me about writing the Jackson episode of Netflix's AJ and the Queen? There was a love story moment, there was Latrice and Monique being fabulous, and the touching AJ storyline with her and the puppy. What was it like working with RuPaul on that episode?
It was a blast and a dream come true. I was brought on as a consultant and I wasn't expecting to get my own episode, which sort of happened as we were going. I was so touched that they threw me an episode. I also had so much help from Michael Patrick King, who's a true genius. Ru is so down to earth. He was the one person in the room who would go around the circle and be like, “What do you think, how do you feel about this, or what was your personal experience about blah?” He was very much about getting the story right and also playing a person that was different from himself and really being an actor. He was just so just open and vulnerable like on set.

It was a great experience because I feel like it was a lot of people doing a lot of things for the first time, and including RuPaul. It was a foray into the unknown for everyone. Everybody just was really supportive. It was collaborative because we were trying to convey the reality of what it's like to be a drag queen, and not just in New York but like a drag queen in the middle of country—in this episode in Jackson, Mississippi. I'm from the South and so is Latrice, so we were able to explore what is it like to be at these clubs or to have this life outside of the gay bar. What's your day to day? We really wanted to be authentic to that.

4. You’ve done these popular Golden Girlz Live! shows in which you play Rose. What is your desert island GG episode? What do you love about it?
There's so many good ones. The one that I always go back to—and we haven't done this one on stage yet, and I'm not sure why— is the episode where this woman claims to be Dorothy's mother and says that Sophia is not really Dorothy's mother. I love it. It's so beautiful when Sophia and Dorothy come to the realization of we don't care, you're my mother, you're my daughter. There's something very queer about that too—about your chosen family. I love, love that episode. I also love the weird episode where they get stranded on a desert island. It's insane. We could never do that one on stage, but I love that one because it's just so clear that it was 4 AM and the writers were like, “I don't know, let's try this one.”

5. What’s your process when you are creating something new, be it an episode of AJ and the Queen or Happy Birthday Doug? Is there any ritual to it or is each experience very singular?
That's a good question. I think I always just start writing characters. I always just think of characters first, and just start vomiting characters talking. Then I like to get up and sort of act it out. A lot of stuff comes out of me when I’m not me sitting at the laptop and thinking, so I have to act it out a little bit. Then plot and structure come in later. With Happy Birthday Doug, I didn't really know what the show was about until like two weeks before my first show. Jhoni Marchinko, who's one of the executive producers of AJ and the Queen, used to tell us, “just start writing and it will tell you what it is.”