Scenes from Childhood Creator and Star Ari Brand Discusses His Personal, Revelatory New Play About The Life of His Father, Natan Brand 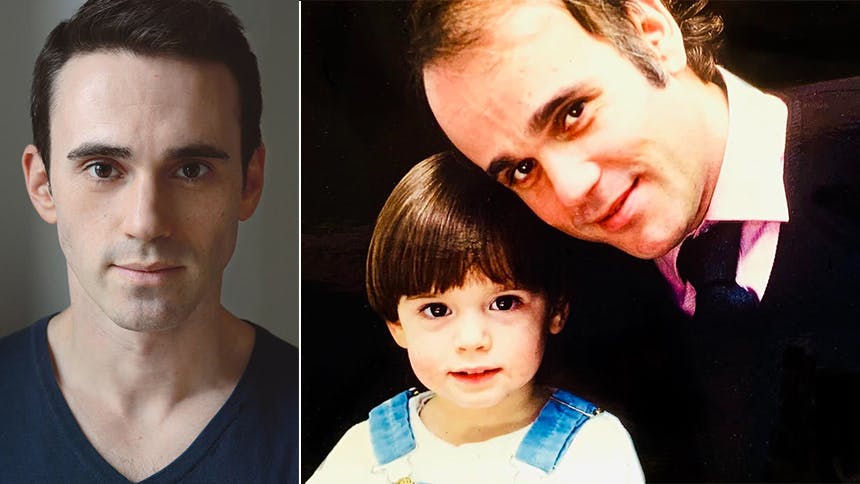 Photo by Courtesy of Ari Brand

While creating his breakout role in My Name Is Asher Lev, Ari Brand was inspired to discover the hidden truth about the life of his father, Natan Brand—the Israeli classical pianist who died of AIDS at age 46 in 1990. This January, Ari debuts the personal and illuminating new play Scenes From Childhood at the 14th Street Y. The piece, which stars Ari as himself and his late father, explores the untold life and death of Natan and Ari’s own efforts to make sense of his story. BroadwayBox caught up with Ari to discuss opening up his father’s legacy, recruiting his Asher Lev co-star Mark Nelson to co-star, and his recent high-profile TV gigs.

What first inspired the show? Take us on that journey.
My father was a classical concert pianist who died of AIDS in 1990, when my brother and I were kids. For a long time, I thought we were the only ones; as so many remember, it was a terrifying time in New York City, particularly in Greenwich Village where we lived, and people I knew didn't talk about it. I realized later, of course, that there were lots of other families like ours throughout NYC and across the country, who suffered the same tragedy.

Then in 2012, I was in rehearsals for My Name Is Asher Lev, and I had an epiphany that my character bore many similarities to my own father: a lapsed orthodox Jew, child prodigy artist who is misunderstood and struggling with fame, art, identity. I was surprised I hadn't seen the connection sooner, which led to a second epiphany: I actually knew very little about my father's inner life. I started digging deeper, interviewing family, friends, his former students, even reading his private journals and letters.

After Asher Lev closed, my friend Eugenia Manwelyan told me to stop waiting to be cast in my next project, get off my ass, and just write something myself. I told her I didn't know how, and I certainly didn't have the time. She told me to take just one hour, write something and send it to her. That was my first assignment. Five years later, I've written this play, and she's my director. And sort of my fairy godmother.

Was there any apprehension about opening up your father’s life in this way?
Of course. These are such complicated questions. Who gets to tell his story, thirty years after he died? Am I, his son, allowed to "out" him, if, in the 1980s, he adamantly did not want people to know his truth? How can I reconcile my loyalty to his wishes with the feeling that telling this story might, in some small way, make the world a more open, safer place for others? These are the questions I've asked myself many times over the last five years. But the more I wrote, the more I felt that it was important to keep writing, not only for personal reasons, but also to bring a new voice to the larger narrative of the AIDS epidemic. I believe that my father, like so many others, died thinking he'd done something wrong. I wrote this play as an attempt to set his soul free.

What was the most surprising thing you learned about your dad during the creation of this piece?
Just how childlike, mercurial, and hypersensitive he was. I don't think he processed emotions in the same way an average person does; I think he felt things deeper and more intensely. So, when he was around children he was the first one on the ground acting silly, because he himself was like a child at play, making believe, reacting in the moment, searching for something exciting and beautiful. And, like a child, his emotions would get the better of him sometimes. He would get overwhelmed, especially in public, which is not so easy for someone who gets up on stage for a living.

What made you approach your Asher Lev co-star Mark Nelson to appear in this with you? How did you know he was the man for the job?
Let me just say this: The incomparable Mark Nelson agreeing to do this play alongside me was a dream come true. Mark and I have remained close since the 350 or so performances we shared during Asher Lev—he is godfather to my two cats, he helped orchestrate my marriage proposal, he even officiated my wedding. Working together again, and on something I wrote, has been an amazing experience. He takes my breath away as the director of the play within the play, and it takes everything I have not to break when he sends up my stepfather.

You’ve recently appeared on two fantastic, stylized TV series, The Marvelous Mrs. Maisel and Fosse/Verdon. What was your favorite set memory from each?
Obviously, there were so many moments just watching and learning from Michelle and Sam (#firstnamebasis), but my favorite moment doing Fosse/Verdon actually happened on a break: The entire fake original Broadway cast and crew of Pippin, in full costume, packed into a single dressing room, had an impromptu 45-minute Pippin singalong led by Alex Lacamoire. It was truly, dare I say... magical?

For Maisel, I'll share another off-set memory: pre-recording in the big room at the historic Electric Lady Studios. I've walked by that iconic building literally thousands of times because it's around the corner from where I grew up, but I'd never been inside. Thanks TV!

Newer
Friday Playlist: The Broadway Musicals of the 2000s
Older
Bops Only! Kick Off the Weekend with Five Killer Music Videos From Chicago’s New Star, Erika Jayne
Sign up for BroadwayBox Discount Alerts