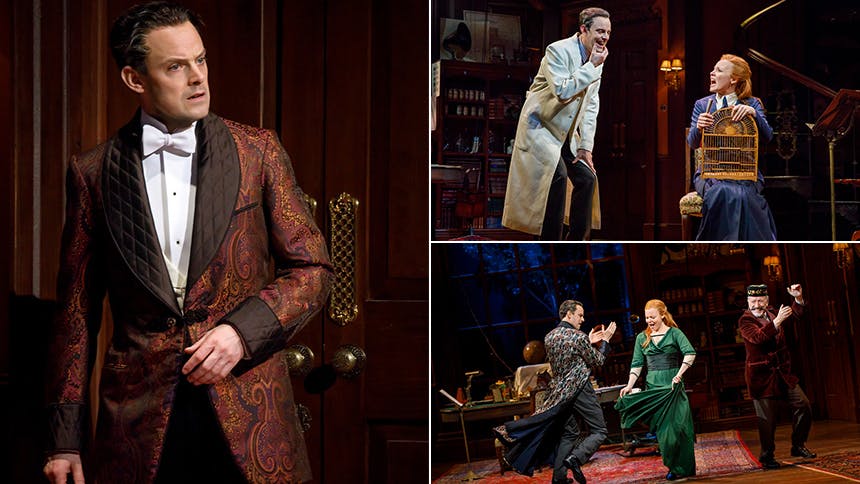 After an acclaimed stage career in the UK and featured roles on two of biggest British TV series (as Herbert Pelham on Downton Abbey & as Martin Charteris on The Crown), Harry Hadden-Paton makes his Broadway debut as Henry Higgins in the lush Lincoln Center Theater revival of Lerner & Loewe's classic My Fair Lady. Harry earned a Tony nomination for Best Leading Actor In A Musical for his layered performance as the posh professor of phonetics.

BroadwayBox caught up with Harry to discuss his journey as Higgins, what he thinks happens after the striking final scene, and his onset experiences on Downton and The Crown.

1. It’s not easy to play Henry Higgins. How did you find the balance of his intellect and his charm? How do you keep him in check from being too condescending or tyrannical?
I think it began once I had realized he was flawed. Usually you stand up for your character, and I did to a certain extend, but it was helpful once I acknowledged that he’s flawed and, in my interpretation, that he comes close to acknowledging it himself. He is ultimately changed by her. The joy of being an actor is that you go on a journey and this is a journey of self-discovery. So actually, I can afford to be quite brutal and condescending and misogynist because I feel when I step off stage he’s made a change, and hopefully people feel for him.

2. What’s the most important thing director Bart Sher said to you that helped shape or direct the journey you took with this performance?
The great joy of rehearsing with Bart is that we tried many, many different things. Right up through previews we were calibrating things. What he gave me was the freedom to try everything out. [Henry] is a complicated character: He’s passionate about work and he doesn’t understand emotions. In modern day, there might be a diagnosis for someone like him. As soon as I found that he just doesn’t get emotions, it helped me through. It makes sense of his past and it makes sense of the end, when he doesn’t really know how to deal with what’s happening to him. It’s lovely to leave the audience wondering what’s going on, and even with him wondering what’s going on.

3. The audience can create their own idea of what happens to Eliza after this revival’s striking ending, but what do you think happens to Henry next?
It’s just asking for a sequel, isn’t it? [Laughs] I think ultimately, he realizes that she has to go—the student has surpassed the teacher. For her to stay would be to diminish her and her abilities. But I think that there is a friendship now. I think he knows that she had come back to say goodbye properly, and in his own words (because he can’t talk about emotions), he’s said sorry. He acknowledges everything they’ve been through. I think it ends on a note of hopefulness that they will have a relationship in the future, but they’ll have their own lives—and now she can fly.

4. Which TV set did you have more fun on Downton Abbey or The Crown?
More fun is an interesting question because with Downton they knew what they were doing, and it was the final of the series, so everyone was out to have fun. We had a lot of fun! We were on location shooting over the summer, and it was great. They are such a lovely bunch of people who welcomed me really warmly.

The Crown was fun but it was work—which is where I get my fun from anyway; it’s my favorite bit. Because I was in it from the beginning this time, you felt like you were collaborating toward the success of the show. [Director] Stephen Daldry gave me the freedom to improvise and build my character and make him 3D and interesting. So they were both fun but for different reasons. Downton felt like a celebration and The Crown was exhilarating work.

5. At what moment in My Fair Lady do you feel most connected to someone else onstage, and at which point do you feel most alone in your journey?
Well, I feel pretty lonely at the end. When he goes back into his study and looks around and realizes that none of it matters, that’s when he’s at his most lonely.

The whole first act with [Eliza] when we are working each other out, there’s this connection—and it’s so important that there’s a connection between us that’s firing. Then in “Rain in Spain”, it lifts out of this relationship that it was into one of equals celebrating something that they’ve accomplished together. I think that’s when the audience starts really feeling for them, and it’s lovely.