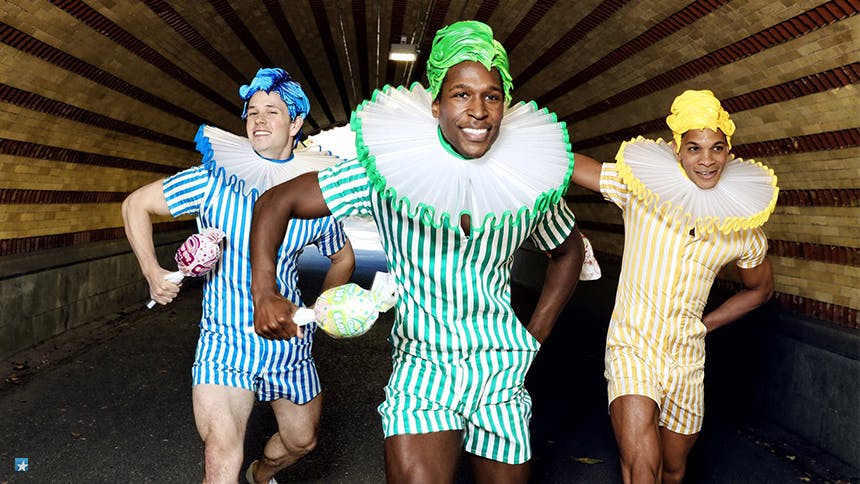 For the 80th anniversary of MGM’s Oscar-winning 1939 film The Wizard of Oz, BroadwayBox teamed up with photographer Curtis Brown, award-winning & up-and-coming costume designer Beck Jones, and director/videographer Jaytel Provence to present Broadway Celebrates Oz, a modern, editorial look back at Oz in 2019 and its beloved characters. Over the next few weeks, BroadwayBox shines the spotlight on each of the illustrious participants in the series. We kick off the final week with Spencer Clark, Jamie Kasey Patterson, and Jaysin McCollum (a trio of standout dancers featured in the three Disney musicals on Broadway) as The Lollipop Guild.

. Before Broadway, the North Carolina native appeared in the Barrington Stage Company premiere of Joe Iconis’ Broadway Bounty Hunter, the Ogunquit Playhouse production of Victor/Victoria, and the Merry-Go-Round Playhouse productions of Legally Blonde, Singin’ in the Rain and Gentleman Prefer Blondes.


Spencer is repping the people of Arendelle and Disney’s latest hit musical, Frozen

. Before joining Frozen as a swing, the dancer from Seattle previously appeared on Broadway as Alonzo in the Cats revival and in Cirque du Soleil's Paramour. He also danced with the Pacific Northwest Ballet School, appeared in Paper Mill’s West Side Story, The Old Globe’s In Your Arms, and Keith Urban's "Never Comin' Down" music video.


Jaysin hails from Cincinnati, Ohio. He’s danced with the Cincinnati Ballet, the Charlotte Ballet, and the Chautauqua Ballet. He opened the original Las Vegas company of Disney’s The Lion King

before making his Broadway debut in 2011 as part of the Tony Award-winning Broadway production. So if you've seen The Lion King within the past nine years, you've seen Jaysin. In addition to his work as a featured dancer, Jaysin also understudies the hilarious and dim-witted hyena Ed.

The Lion King
Best Priced Tickets
Newer
Who Is Slava Polunin? Learn About the Russian Clown Behind Slava’s Snowshow
Older
These Are the Magicians and Magic Acts That Impress Even Broadway's The Illusionists