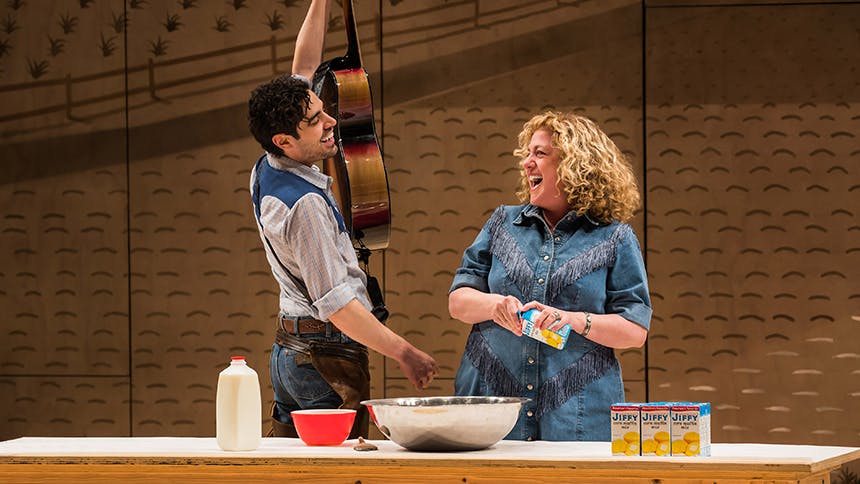 Mary Testa is nominated for her third Tony Award this season for her singular performance as Aunt Eller in Daniel Fish's must-see revival of Rodgers & Hammerstein's Oklahoma!

. Unlike many Aunt Ellers who only provide comic relief, Mary's Eller is a strong, tough, and wise woman who survived life in the territory and is respected for it.

BroadwayBox caught up with the legendary OBIE winner and Drama Desk recipient to discuss crafting her Aunt Eller, her comedy dream role, and what she's learned between her first Tony Award nomination and this one.

1. Your Aunt Eller is distinctly original. How did you approach her? How did you find the truth in what’s normally just played for laughs?
I always try to approach a character by finding the similarities first between myself and the character, and then building on the differences. I just organically try to find the truth in everything. She’s very much a leader and a truth-teller—she says what's on her mind and has no fear of confronting confrontation—and that's very much like me. As a matter of fact, Jack Cummings, who runs Transport Group, called me truth-teller. Finding the comedy in this was fairly easy. She's got a good sense of humor, but she's also a fierce protector of Laurey and Curly and what she wants to see happen and how she wants it all to go, and therein lies the flaws.

2. Speaking of her strength, your Aunt Eller is a strong woman, who (in this production especially) you see inspires the strength in Laurey at the end. Who was a strong woman who inspired you coming up in the theatre?
I'm inspired by everyone I know basically. It's a very difficult business. It takes a lot of courage to keep doing this, and so, I'm inspired by all of my friends—brilliant performers recognized and unrecognized—who just keeps putting one foot in front of the other. That I find inspiring. One of the things about me is that I try not to have any heroes, because I've been disappointed in the past.

3. You were first nominated for a Tony Award 20 years ago this year for your performance as Madame Maude P. Dilly in On the Town. What’s one thing you learned about yourself as an actor between that first nomination and this one?
It's all really lovely to be recognized and nominated. The first time I was nominated, On the Town had closed in January, so it was an unbelievable surprise. I knew that because the show had closed, I was just in it for the fun. I think what I've learned about myself is that I don't take these things seriously because it's such a weird thing that human beings set up. As I said, I have so many brilliant friends who are not recognized for things and should be. It's the luck of the draw. So, while I find it to be a great honor, I try not to take too seriously. I said in one interview, I'm not in this business to be a star; I'm in it to do interesting work and to be artistically satisfied, because that's what makes me happy. So the award stuff, while it's beautiful and a very big honor, is beside the point in a way.

4. As an actress known for your comedy, which role did you feel funniest in?
Well, I've been in this business for 42 years and I've done lots of work. My favorite work is the comedy that's tinged with great drama, and so I think my character in On the Town was pretty funny. She was a drunk singing teacher and I think I had moments of a little bit of genius in that. But I have lots of different things that I like.
Is there a comedy role that's still on the bucket list that you haven't had a chance to play yet?
The one role I've always wanted to play—and I think I'm a little too old now—is Kate in Taming of the Shrew. I would love it. You know, I still look good, so I could probably pull it off. That's the one role I've always wanted to do because I find that piece confounding. But I don't really have a bucket list. That's the other thing about me, I just kind of come up against whatever comes my way. I love doing Michael John LaChiusa musicals, so I'm hoping that he writes more stuff for me. I like doing new work, and I like working with directors who are daring like Daniel Fish.

5. I'm such a fan of the cult 1984 musical The Rink. What's your craziest or favorite memory from your time as Liza’s standby in that show?
I wasn't the original standby for Liza, Lenora Nemetz was, and Lenora left and I got the job in May. In July, Liza committed herself to the Betty Ford Center, and so I went on for two weeks straight. I kind of finished Liza's run. My first show was a two-show day and it was the 4th of July. It was a great role for me. It was amazing. Chita was amazing. But when you are standing by or understudying, the first time you go on, you're not up to the pace that the show is, and it takes a minute. Chita, at one point, just whispered in my ear, "Pick up the pace!" It was a really unbelievable experience. That was also the last time I stood by too because I said to my agents, "I'm done with this."

Don't miss Mary Testa in her Tony-nominated turn as Aunt Eller in 'Oklahoma!' at Broadway's Circle in the Square Theatre through January 19, 2020.