Broadway Showstopper Spotlight Series: George Salazar on Representation, the "Mind-Blowingly Inspiring" Be More Chill Fans & His Relationship with "Michael in the Bathroom" 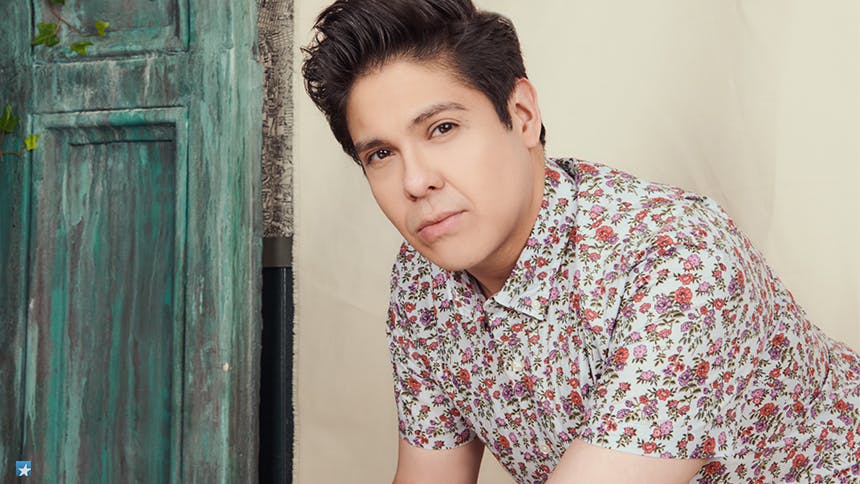 The Broadway showstopper is alive and well and living its best life this season, thanks to the 10 incredible performers featured in our upcoming spring photo & interview series. The talented group was photographed by Jenny Anderson at Times Square's Haswell Green's. This week we spotlight Drama Desk and OCC nominee George Salazar, who stops the new musical Be More Chill cold in Act II with this Lortel Award-winning performance of the Joe Iconis anthem "Michael in the Bathroom". George created a musical theatre movement with his goofy, lovable sidekick Michael Mell, winning over a horde of young fans that propelled the musical from its small New Jersey premiere to Broadway.


Do you remember the first time that you felt talented or that your voice was special?
I didn't get started in theater until I was deep into high school (like junior) but, as a kid, I used to dance and sing for my family. Whenever we'd have family from New York or California come to visit us in Florida, my mom would set chairs up in a circle in the living room and I would stand in the middle and dance. My family would tip me a few dollars, like I was a drag queen, and it was such a big deal. But I never knew or thought that I could do this as a career.

Outside of this amazing experience with Be More Chill, when have you felt the most artistically fulfilled from a project?
I would have to say Here Lies Love. It was my first time being cast as like a dance ensemble member. So, in that sense, it was incredibly challenging for me because I would never consider myself to be a dancer, and I was dancing for 90 minutes. It was the first time I had to change my habits—change my eating habits and change my lifestyle habits to allow me to be able to function fully for a show. I've carried that kind of dedication with me since I did Here Lies Love. It's carried over into Be More Chill now.

Also, it was such a dream to work with Alex Timbers as a director. My first taste of his work was seeing Dance Dance Revolution at the Ohio Theater, back in the day before most people knew who Alex Timbers was. I remember being so taken by his style and aesthetic. And I was telling the story of my people, so there was pride in and a personal connection with telling the story of Imelda Marcos and the people of the Philippines. It was exciting to be able to make art that was so critically-acclaimed and so hyped, but at its core, this was a story about my people. It was really cool.


How has Michael Mell changed and grown since the 2015 world premiere at Two River Theater in New Jersey? In what ways is he different on Broadway than he was in Jersey or in the sold-out off-Broadway run?
Michael is ever changing. The world we live in, in 2019, is so different than the world we lived in in 2015, when we did this show in New Jersey. I see the world affecting the portrayal of this character in a way. There is so much more to be stressed and worried about now than there was in 2015, and that plays into the characterization and the portrayal. He feels more current. With each stage that we've done of this show, he feels more and more like a real person, and I'm really proud of that.

And, I’m inspired meeting the young people who are the age of this character. This generation of young people are just so smart and mind-blowingly inspiring.

How so?
I was in high school right in the middle of 9/11 and the Iraq War, and I remember feeling completely helpless. I remember feeling like nothing I could do or say would change the narrative. Now there’s this shift that's happening, in terms of everything from Parkland to trans rights. It's like a seismic shift, and it is truly being generated by this generation of young people. One of the beauties of Be More Chill becoming so popular is that I've be given a chance to meet a lot of these young people face-to-face and spend time with them, and talk to them, and look them in the eyes, and listen to them and hear what they're saying, what they're thinking, what they fear, and hear what they love. And allowing all of those things to permeate this character so that we can make this kid, this Michael—who they've found a way to relate to—even more relatable to young people.


Let’s talk about the young fans who latched on to you and “Michael in the Bathroom” in this incredibly real way. How is it for you to suddenly have this big fan base that wants and expects things from you?
It's the best thing in the world, it really is. I grew up mixed race—my dad's from Ecuador and my mom's from the Philippines—and I grew up not seeing myself in media. I saw John Leguizamo in The Pest, and I saw him in To Wong Foo, and I remember being really taken by him as a young person. But I didn't see a mixed-race person who was gay and proud of being gay. I didn't see that portrayed anywhere. It's been an intense responsibility, but also such a blessing to (in some very small way) have young people to see themselves in me—and not just me, but the entire cast of Be More Chill. We are a cast that really reflects everyday America. There are people of all shapes and sizes, and all sexualities, and genders, and cultural backgrounds just thriving together. It's been a really nice. It's been a blessing to be able to know that I can, for at least just one person, help them feel seen and help them feel represented.

Did you ever think during the summer of 2015 that Be More Chill would be the viral musical of a generation?
Take all the viral popularity of Be More Chill and let's throw that out the window. When we made this thing, we were spending a summer together in the Jersey Shore hanging out with our friends and making a musical. It felt like summer camp. For that thing that we did that summer to have snowballed into this huge thing that has made such a positive impact on the lives of so many people, that is the best thing that anyone could ever ask for, or wish for, or hope for, for their art. It makes it feel like we're not just making shit for ourselves; we're making things for people, and when you make things for people, it's always better. It feels like we're doing that now. Back then, we made it for ourselves, we were doing a musical together. And now we go out on stage and we know that there are people in the audience who need to see and hear this musical.


It’s fair to say that if someone walked into the show knowing only one song, it is “Michael in the Bathroom”, and they know it from the version they've heard a million times. How does that feel for you? Did you ever feel trapped in by the song? How do you navigate the popularity of the song and your own artistic desire to play with it and keep it fresh?
I'm an anxious person. If I think about the popularity of the song—and I have in the past. I've fallen victim to this—I get really anxious, and it doesn't serve me, and it doesn't serve the piece to have that be a part of my thought process. So, I try not to think about it. I just tell the story, and every night it's different. The thing that has kept this song fresh for me (and I hope fresh for the audience) is my hope that it feels alive every time. That's my goal; that's what I strive for. And in order to be able to do that, the first part of the thought process is, "Just tell the story." It's never going to be the same every night. There undoubtedly was one performance where I felt so locked in and I felt like, "Oh, that was the best performance ever." The trick to doing this is to not try to chase that sensation. It's not about trying to recreate one night or one performance of the song. It's about going out there, being present in the moment, and performing it for the people who are hearing the song for the first time.

When people see the show for the first time, they see this optimistic, funny best friend with a heart of gold. So, when the song starts—and I'm talking about how I regret the beers that I drank and I'm Michael in the bathroom at a party—there are chuckles from the audience. And a really cool moment that has always happened and has become one of my favorite things is that those chuckles eventually stop when the people who are experiencing this for the first time realize that the character's going on a journey that they were not expecting. That, to me, is the most satisfying part. It's the subverting people's expectations that I think is really exciting. It feels really satisfying.


You’re the first person who has played Michael Mell, but undoubtedly people will play him in schools, tours, community theatres, etc. What do you want those actors to know? What have you learned about this role or this song that you’d like to pass on?
I would tell other actors who will play this part that Michael is, in many ways, the heart of the show. He’s the only character, other than Mr. Heere, who doesn’t want to take a SQUIP, doesn’t feel the need to change, and he lives for the person he cares about the most. Play him like the best friend you wish you had and the best friend you wish you could be. Take the audience on the crazy journey—win them over in Act One and take them with you into the depths of anxiety in Act Two and they’ll be ready to cheer you on at the end of the show. It’s a satisfying ride to be on, so enjoy every second of it. I certainly have.

Be More Chill
Best Priced Tickets
Newer
Ryann Redmond Is a Belting Powerhouse! 12 Videos of the Frozen Star Singing Her Face Off
Older
First Look at Audra McDonald & Michael Shannon in Broadway's Frankie and Johnny in the Clair de Lune
Sign up for BroadwayBox Discount Alerts