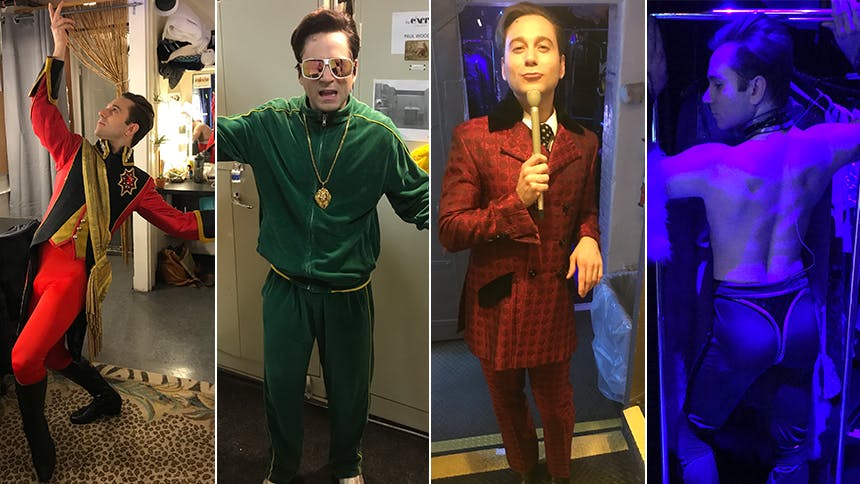 Michael Fatica plays a variety of colorful characters(from Phil Spector to the slimy Top of the Pops host) in the hit Broadway bio-musical The Cher Show. The standout dancer of Broadway's She Loves Me, Groundhog's Day, Newsies, A Bronx Tale and Matilda, Michael also slays the musical's intense Christopher Gattelli choreography while wearing some stunning and sexy costumes by 2019 Tony nominee Bob Mackie.


Scroll on as Michael introduces all his The Cher Show characters and Bob Mackie costumes, as well as some amazing Mackie tidbits that inspired the epic lewks.

Cher is known for her many decades of stardom, and for her incredibly innovative and shocking looks over the years. As a man in the show, I had no idea what sort of goodies we would get to wear, as anything pales in comparison next to Cher. People ask me all the time what it was like to be in costume fittings with Bob Mackie. I can tell you one thing….every fitting had a new surprise and a new quip from Bob about it. I’ll try to recount some bits of worldly wisdom that Mr. Mackie gave me about this incredible variety of looks.

Ahoy, Mates!! What better way to kick off The Cher Show than with a gaggle of boys throwing it back to Cher’s iconic “Turn Back Time” music video? The audience hears the beat of "Turn Back Time" drop, and sailors begin to flood the stage. Little do you know what’s hiding underneath this sleek uniform...

CHERIFIED! Our character of Star, played by the luminescent Stephanie J Block, shoos the sailors away to make room for our fierce female ensemble to take over, dressed in a more scantily clad version of this above treasure. In this incarnation of “Cher”, Star takes us into the story with a new, modern, female driven (heck yea!) version of "Turn Back Time". The gents re-enter to become the rest of Cher’s dancing posse. FUN FACT about this costume: The pants are actually a women’s Spanx brand moto legging that Bob Mackie saw Cher (the actual Cher) (yes, her!) wearing. He saw them and immediately envisioned them on the tushy-heavy men’s ensemble!

The Cher Show jumps around to many different decades. The character of Babe, played by Micaela Diamond, leads us through Cher’s early years. This particular get up is one of “club goers” in the swingin’ '60s, featured in a scene where Sonny meets Cher. The stage is full of Mod fashions that Bob Mackie created, a cornucopia of color.

STOP TAAAPE! I am very lucky to play a few colorful characters throughout the show. Featured here is Phil Spector, music producer extraordinaire, wearing what I can safely say is the most comfortable costume I’ve worn on a Broadway Stage. What other character could pull off a green velour jump suit, paired with snakeskin boots, sunnies (indoor), and a gold lion medallion? This was the first costume I tried on in fittings for our Chicago production of The Cher Show. A great costume can sometimes inform the way someone moves, or how the character carries themselves. I think this one speaks…..volumes.

Sonny and Cher made a huge splash with their debut of “I Got You, Babe” on the British music program, Top of the Pops. I get to flex my lecherous muscles in this baby, as this announcer takes quite a liking to Babe. She’ll certainly see him coming in this flurry of polka dots. Bob showed me the sketch (pictured above) of this costume and said to me, “This man needs to….swish! Make sure we see the jacket MOVE!” When Mackie says swish...one swishes.

Yes, you are correcting in being concerned about this character’s heart pressure. Meet Sid the Censor. He works for The Sonny and Cher Comedy Hour, and he has the unenviable job of trying (key word, trying) to convince Lady (the version of Cher played by Teal Wicks) to keep her outfits a bit more...conservative. Each week, he and Bob Mackie go toe to toe about what’s more important, ratings or keeping their buttoned-up network appeal. Sounds frighteningly current, doesn’t it? In my fittings for this character, Bob looked at me and said, “Yup, this is right. I’m getting stressed just looking at you”. I took that as a compliment, obviously.

The Cher Show holds nothing back when it comes to modesty. During the song “Bang Bang”, Lady’s personal past trauma merges with Star’s concert present, and the ensemble back them up in full S&M dance gear. This look includes a classic jazz pant with a leather thong (with a cod piece, but you’ll have to come see the show for that!), wrist bands and a collar. The choreography lets the women control their man, as we watch Lady take control of her relationship with Sonny. Thank goodness for Squats, am I right?

Anyone who has seen The Sonny and Cher Comedy Hour knows that bigger was certainly considered better. We open the second act mid-number, in a Napoleon sketch, featuring Sonny (Jarrod Spector) and Lady in full French Revolution garb. I love the way that these custom jackets cut each guy perfectly, and the Laduca boot with a Cuban heel makes me feel tall and lifted (dreams do come true for this shorty!). In true “Cher” fashion, this opulent look only gets about a minute of stage time.

Everyone who knows about Bob Mackie knows that his sketches are to die for. When he revealed his ideas for the number “Dark Lady”, an Act 2 dance number that features one “Lady” controlling a stage full of men to highlight Cher’s love triangle with Sonny Bono and Gregg Allman, we all leaned in. It looked like his figurines were fresh off a battle with a lioness, leaving with their clothes scratched away from their bodies. You can see that this skintight number is created from pieces of lush fabrics all strewn together, complete with cut outs in all the right places. No carbs for dinner in this show.

The Jumpsuit Goes On

Mackie is famous for his jumpsuits. In the second Act, Mackie’s “dressers” serve as a greek chorus during a montage of Cher’s achievements on film, danced to the classic “The Beat Goes On”. Bob had the idea to make a jumpsuit that resembled a classic black tie suit, which matches perfectly with Chris Gattelli’s frug-meets-thrash choreography.

Missed Cher in concert this year? DON’T EVEN WORRY ABOUT IT!! The finale of our show features a taste of what it’s like to see the Cher we all know and love rock a concert stage. This tracksuit is the base for Cher’s crew of dancers. In a sea of uniformity, our gorgeous ladies who embody Cher can really shine. Come and see The Cher Show and join the dance party!