Five Burning Questions with Tony Award-Winning Producer & Author of Come On Along & Listen to My Life in Theatre, Martin Markinson 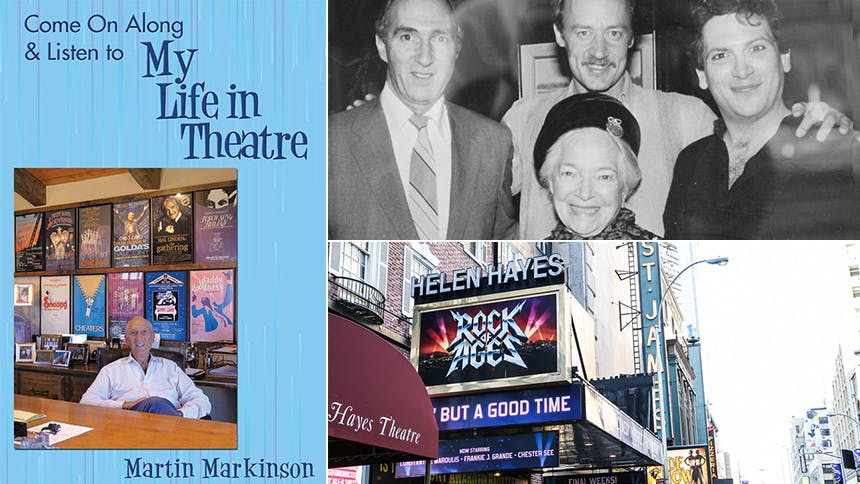 Tony Award winner Martin Markinson was in the insurance business before fate had other plans. His first project as a producer was on the original Broadway production of Chicago—he has an amazing story in his new book about how he helped save the production! He went on to produce or co-produce 40 plays and musicals, including the Tony-winning Best Play Torch Song Trilogy, and, for 36 years, he owned and operated Broadway's Helen Hayes Theater. In his new memoir, Come On Along & Listen to My Life in Theatre, Martin (known to friends as Marty) shares his adventures as a producer, a theater owner, and tips about the business of show business.

Photo by Courtesy of Martin Markinson


1. What do you consider your big break? How did you break into the world of producing on Broadway?
Well, my big break into Broadway was the opportunity to get involved in Chicago in 1975, which got me into the business. However, I believe my biggest break was producing Torch Song Trilogy and bringing it to the Helen Hayes Theater. I always believed it was a very, very important show to do, and I was very happy to present it on Broadway. That would always be my fondest memory.

2. What was it about Torch Song when you first saw it downtown at La MaMa that you knew this was the play to go all in on? Why did you want to be the one to champion this project, bring it all the way to Broadway, and make a star out of Harvey Fierstein?
Well, it opened my heart to have more of an understanding about the gay world. I discovered that love, affection and respect was the same thing every human being wants. I was so moved and touched by it that I said, "This is a show—not only do I want to produce—I want to bring it to my theater. Win or lose.” That's what I wanted to do.

3. As a theater owner, how did you choose between shows you wanted to produce verses shows you wanted in your theater? How did you make the distinction about which role you wanted to play in a production?
Well, it depended very much on the position of the theater at the time. If I were dark and I only had several shows to choose from, I would want to get the one that I thought had the best chance of having a decent run. Sometimes I loved the piece that I picked and sometimes I just picked the piece out of necessity. Running a theater is difficult enough, but when your dark and you only have one theater, it could be a very financially losing proposition.
Which show surprised you the most with its success at the Hayes?
The show that surprised me the most was Rock Of Ages. I mean when I booked that show, I was talking to our staff to start looking for a replacement because I didn't think it would be there for more than three or four months. As it turned out, it ran for over four years and it was our biggest money-maker and our longest-running show in the 40-year history.

4. Was there a show that you passed up that you regret letting get away?
No, never. I never really had any regrets because I always went with my gut feeling. Sometimes I was right; sometimes I was wrong. But I never looked to criticize myself for mistakes.

On the producing side, it had to be something I felt was worthwhile. As I always told people whenever I produced a play, just spending the time having to produce it and finally getting it to an opening night on Broadway, that in itself was a success for me. And if it sold a lot of tickets, I felt lucky; and if it didn't, I still felt I was proud to do it.

5. Finally, what advice would you give to someone reading the book who dreams of producing on Broadway?
If you want to get into the theater business on any level, there's two things you have to understand. One: you have to be able to take and live with rejection. The other thing is you definitely have to persevere and try not to give up. Those traits are a requirement if you want to be in the business.

For more, pick up Martin Markison’s new book ‘Come On Along & Listen to My Life in Theatre’.

Newer
Learn More About the New LGBT Drama Running Off-Broadway, The New Englanders
Older
#Mood: A Beetlejuice GIF That Captures How Each Day-O of the Week Feels
Sign up for BroadwayBox Discount Alerts