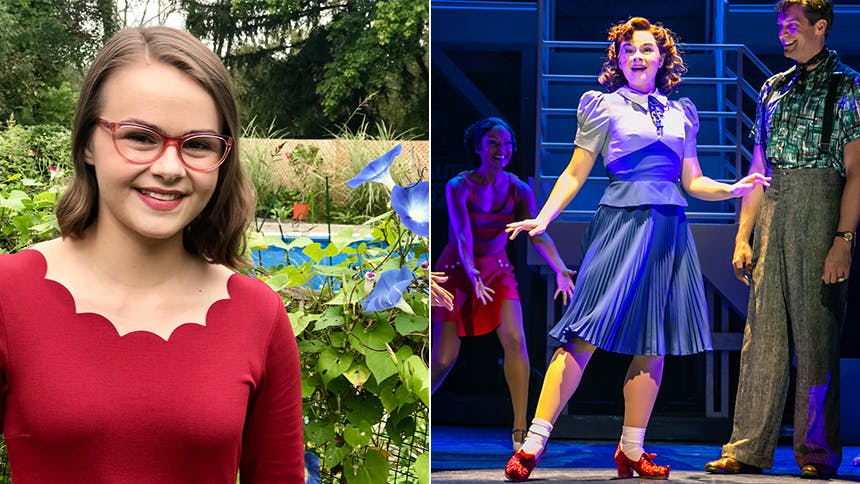 Ruby Rakos takes on the iconic and beloved movie star Judy Garland in Chasing Rainbows: The Road to Oz

. The new bio-musical focuses on the early part of Judy’s life (back when she as Frances Gumm) through her big break in The Wizard of Oz and runs at New Jersey’s Paper Mill Playhouse until October 27.


BroadwayBox gets to know Ruby a bit better below as she talks about taking on Judy Garland, discovering herself through her time with the show, her love of cats, and the dream roles she has to wait 20 years to play.

1. How did you first get involved in Chasing Rainbows?
I first got involved with Chasing Rainbows about six years ago. I met our conceiving producer, Tina Marie Casamento, at a musical theatre intensive in New York City when I was sixteen. I just happened to be singing "Zing! Went the Strings of my Heart."

2. What was your audition song?
For my first audition I was asked to sing “Over the Rainbow”, “Zing! Went the Strings of my Heart”, and “Dinah”.

3. What’s the most interesting thing you’ve learned about Judy Garland during your research for this role?
I didn't know much at all about Judy Garland before working on the show! I knew about The Wizard of Oz and her TV show in the ‘60s but her childhood and early years at MGM were completely new to me.

4. What have you learned about yourself in the nearly six years you’ve been attached to this project?
I've been working on Chasing Rainbows since I was sixteen so I grew up with this show. I didn't go to college, so the self-discovery and growth that most people do at school, I did and continue to do through this show.

5. Do you have a desert island Judy Garland film?
Love Finds Andy Hardy! It's my favorite early Judy movie.

6. What do you want Judy Garland fans to know about this musical?
Chasing Rainbows is about the girl behind the legend. Everyone knows Judy Garland, but no one knows Frances Gumm, the little girl in the Depression, trying to keep her family together by doing what she loves.

7. What is something you feel passionately about outside of performing?
Cats! My roommate and I each have a cat and my parents have three cats. I catsit for people whenever I can because I love meeting new cats. They're such interesting animals with very complex personalities and it's fascinating to figure out what makes them tick.

8. What’s your go-to cast recording to sing along with?
I know this makes me a bad musical theater person but I don't really listen to cast recordings! I mostly listen to jazz and swing music, like Nat King Cole, Tony Bennett, Billie Holiday, and Marilyn Maye.

9. What is the last TV show you binge watched?
Mindhunter! I love Jonathan Groff and I love true crime! Season two just came out and after I watched it I just went right back to season one and watched the whole series all over again.

10. Which musical theatre role would you love to play in 10 years?
All of my dream roles are over 20 years away but I'd love to play Mama Rose in Gypsy and Dolly in Hello, Dolly!.

Don't miss Ruby Rakos as Judy Garland in the new musical 'Chasing Rainbows: The Road to Oz' at Paper Mill Playhouse through October 27.