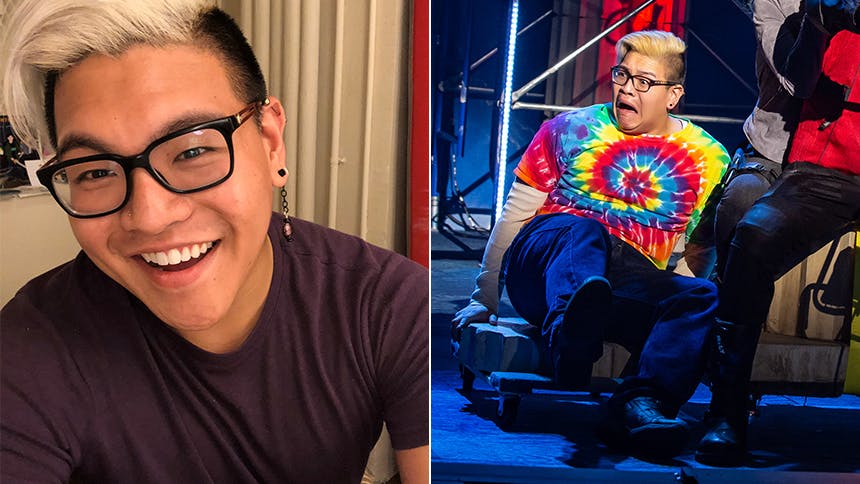 After touring the country and winning acclaim, Jorrel Javier makes a hilarious and scene-stealing Broadway debut as Percy Jackson's bestie, Grover Underwood, in The Lightning Thief: The Percy Jackson Musical. The musical adaptation of the bestselling YA series by Rick Riordan has won over North American audiences and now arrives on Broadway for a limited run.


BroadwayBox caught up with Jorrel to discuss bringing his favorite books to life onstage, the importance of theatre educators & mentors, and feeling vulnerable as a Spoken Word artist.

1. What was your reaction when you found out you’d make your Broadway debut in The Lightning Thief? Who was your first call?
I was working on a new show after I had closed the tour when I got this random, borderline ominous “call me back” call from one of our producers. When I finally called him back, he immediately started talking logistics about how we got a Broadway house, and am I available for these dates, and I was like, “wait…wait…WAIT. HOLD ON. WE’RE GOING TO BROADWAY?!” And he goes, “Oh, right. Yes, honey, you’re gonna be makin’ your debut!” I was speechless. Our producer told me to hold off telling people until it was final, but of course I didn’t listen. The funny part was, my first three calls (my parents, my sister, and my best friend) were all straight to voicemail because they were busy. So here I was freaking out about Broadway, and getting sent to voicemail—THRICE. HAHA! The first to answer my call was Kaitlin Hopkins, who’s the head of the Musical Theatre program at Texas State, my alma mater. She and I are extremely close, and she’s very much my momma bear, so I had to tell her ASAP. She started screaming, and then I started screaming—it was very special.

2. You play a bunch of different characters in the show. How did you go about finding each?
Physical and vocal characterizations are usually my gateway for most characters I play. I always ask myself four questions as a rough sketch and then try to explore from there. Those questions are: which quadrant of the body do they live in (head, heart, gut, or pelvis), how do they walk, how do they talk, and what are three words that would best encapsulate their essence? Once I have an answer to those four questions, I let my imagination (and the director’s direction) do the rest. I find that these questions give me a bit of structure so that I have an idea of how the characters live in my body, but still allow me a lot of wiggle room for playing.

3. Who are your comedy heroes?
Growing up, I found myself looking up to Eddie Murphy and Jim Carrey. Their zany nature and use of physical comedy was something I found myself being drawn to and drawing inspiration from when I first started performing. Watching their work is a masterclass in committing to the bit and following your instincts.

4. Which book(s) you were obsessed with growing up?
Everyone knows this about me at this point, but the Percy Jackson and The Olympians series were and are still my favorite books. I discovered the books in middle school because of the required summer reading, and I just completely fell in love with them. Rick Riordan is a master in capturing the heart of his audience by portraying a riveting and captivating story, with fully realized characters, and a playfully charming tone.  I’m still just as enthralled every time I re-read it.

5. What three things did you always have in your suitcase while on tour with The Lightning Thief?
My number one item is my ankle-length, thrifted, faux fur coat. Her name is Stella, because it’s how I got my groove back. HAHA! I’ve had her since my freshman year of college and she’s seen many parties, sitzprobes (I call her my sitzprobe robe), and dressing rooms. The other two must-have items in my suitcase were my Nintendo Switch, and my signature neon windbreaker. The TLT band members and I are Super Smash Brothers enthusiasts and we often have these post-show Smash showdowns. As far as my windbreaker goes, it’s probably my favorite item of clothing. I feel like it perfectly captures my personality and style.

6. Did you have a favorite tour city? What made it so?
OOOH. This is a tough one. There are so many variables as to why one might be my favorite city, but for me, food is one of the biggest factors. I found that I loved Toronto because of this. It was like my personal food Mecca. All of my favorite indulgences and types of cuisines were easily accessible to where we were, and they were open late so I could have it after the show. Other cities that are high up on the list are New Orleans, Seattle, and Fayetteville, AR.

7. When did you know you wanted to be a professional performer? Was there a role that gave you the confidence to pursue it?
I think at some level I always knew that this is what I wanted to do as a career. I never had the same passion and drive for anything else and it was like this gut instinct that told me, “This is what you are meant to do.” I don’t think it was a particular role that gave me confidence; it was more like I had a great group of mentors and educators who invested their time and love to my success, and by doing so, they gave me the confidence and the permission to pursue this. Educators have such a special place in my heart because I am the product of every mentor who felt compelled to go above and beyond, even when their job didn’t require them to. It’s definitely been a tumultuous internal journey when it comes to confidence and allowing myself to feel like I deserve to take up space on a stage, but I’ve made great strides in letting go of that judgment and just trusting the fact that I am right where I need to be. I’ve started taking ownership of my awesome and I’m finally in a place where I can stand on a stage, bare-boned, and be ok with being seen for who I am. Nothing more, nothing less.

8. Tell us a memorable audition story.
My freshman year of college, we had auditions for the spring musical. I came to the musical theater game relatively late in life, and so I didn’t really know what was required of me in an audition room. I always just “winged it” in high school, and it always kind of worked in my favor, so I thought it would work again this time. Long story short, I came in severely underprepared, and completely blew my audition. I was in the wrong key, sweating profusely, cluelessly singing a song without a lick of understanding or intention. I sucked, and I was painfully aware for it. It was my worst nightmare. However, this experience was probably the most important audition I’ve ever had. It taught me what was required of me in an audition room. It taught me the level at which I was expected to perform and the gap between where I was and where I needed to be. After that audition, I felt horrible—just absolutely horrible—and I made a pact with myself that I never want to feel that way after an audition ever again. I haven’t felt that way since.

9. You founded SLAM! Spoken Word and Poetry Club while in college and regularly competed and performed as a Spoken Word Artist. What do most people not know or understand about Spoken Word? What connects you to it as a creative outlet?
I feel like there is a preconceived idea of what spoken word is based on comedic imitations of what it is in pop culture. And while those imitations contain a speck of truth, I think that people are misunderstanding the magic that can happen when spoken word is done right. Most people associate spoken word with a hyperbolic, wispy, quixotic cadence that accompany empty words that try to be relatable and quirky. But spoken word is just poetry that is meant to be heard instead of read. That’s it. It’s adding a performance aspect atop heightened language so the audience can experience the words as opposed to just reading them. The word play is bolstered by cadence, rhythm, and emotion. It is living and breathing, and it has this incredible way of painting a picture through words. For me, the draw was always its ability to relay what I am feeling in a way that was visceral and intrinsic. It portrays what I’m feeling in a complex and more realized way. It’s always been the gate to my emotions. It is, in my opinion, one of the most vulnerable art forms and that’s what makes it so special.

10. Which movie do you think you’ve seen the most in your lifetime and what speaks to you about it?
Stuck In Love. Hands down. It’s this romantic comedy about a family of writers and how they navigate love in their lives. I think I love it so much because I see myself in a lot of the characters. It speaks to me in a way that a movie had never spoken to me before. AND It has a KILLER soundtrack, which is always a plus in my book. It just has everything I love in a movie. And whenever I experience writer’s block or I’m having that late night melancholy and I’m in my “I wanna indulgently feel sad but good” mood, it’s my go-to movie.