at off-Broadway's Atlantic Theater Company. The contemporary drama looks at a group of 20-something New Yorkers who come together for a book club and the big and small moments that shape their lives. 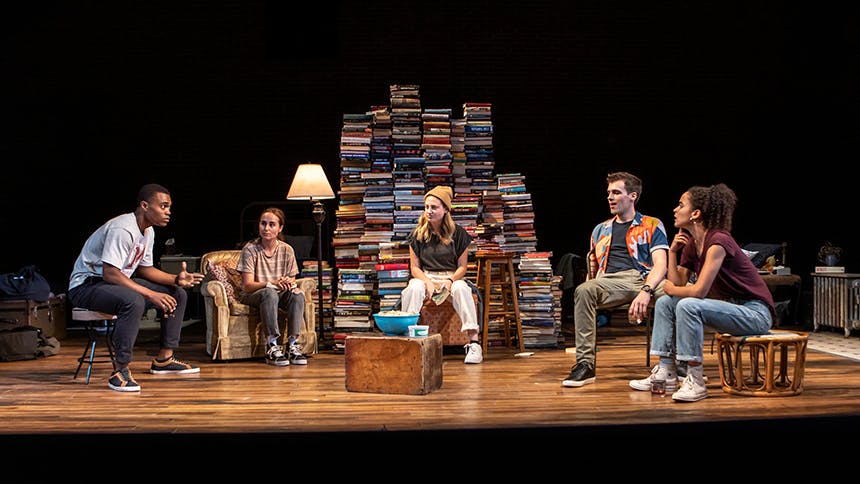 
BroadwayBox recently caught up with the director (whose off-Broadway work also includes Dance Nation, In the Green, & A Beautiful Day in November on the Banks of the Greatest of the Great Lakes) to discuss what drew her to Sunday, the importance of your 20s, and the art that influenced her at the time.

1. What first attracted you to Sunday as a project?
I was first attracted to this script because I had heard that Jack was an absolutely terrific writer and collaborator. I admired him a bit from his reputation, and when I read his script, I was impressed by how vibrant the text was on the page, while he still left room open for big, bold, creative interpretation. Also, I'm always attracted to plays that experiment with form and structure. I thought—oh what an amazing challenge to have a play where the first half is a bit raucous and shocking, fast-paced ensemble scene, followed by an extremely quiet, intimate second half that is a gorgeous two-person scene. 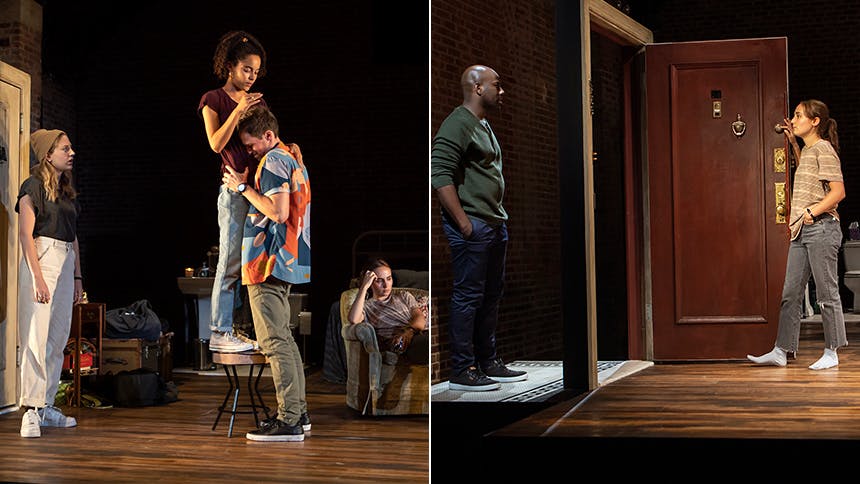 
2. What was your goal when you signed on?
My goal was to experiment with how these two sections of the play could be in the most compelling. 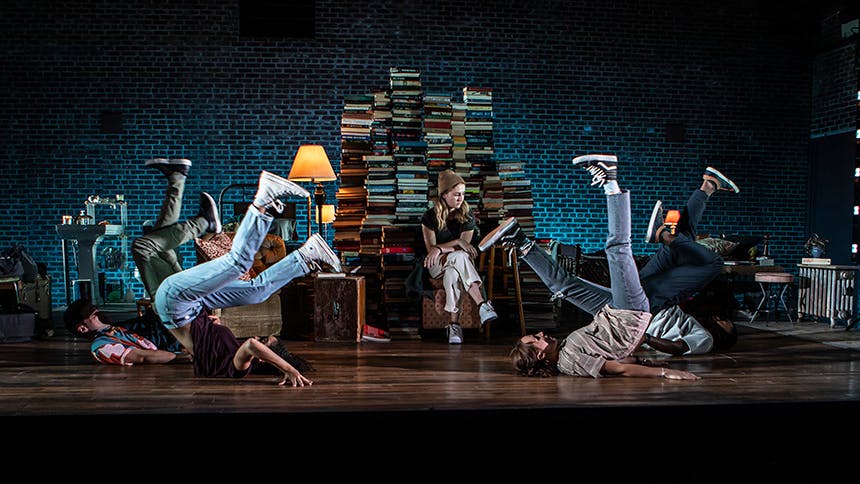 
3. Can you tell us about the dance break transitions in Sunday? Where did that idea come from? What are these characters expressing in those moments?
Jack had written into the script a number of prompts or provocations having to do with the actors shifting the scenery around, or running through the space in all kinds of interesting ways. When we first spoke about the script, he said in a very funny, generous way, “oh, a director will know much more about what to do there than I will.” But we kind of had this great back and forth about these movement breaks being a way to get at some kind of underbelly among the group of friends that could come out and be expressed in a non-literal, more emotional and explosive way than through dialogue. I also felt that there was a kind of cinematic jump-cut that they allowed for in the scene work. A dance break would interrupt a scene and when we entered into the next scene, some amount of time had passed— I thought of them as a subtle connection to Alice (the narrator) wanting to jump around in the story of what happened to this group of friends on this night.

3. Your shows introduce New York theatregoers to some real, fresh talents we didn’t know before. What do you look for in a room when you’re casting?
You know, there are so many things that factor into an audition process. But one thing—almost no matter what the role—is that I always feel that I kind of get a sense for an actor's own sense of humor—what they find funny, amusing, whether they are kind of dry or broad, or silly or very serious (which can also be hilarious). There's something about sensing an actor's sense of humor in an audition that is somehow a barometer of honesty, and a kind of authenticity that seems to show through, even if it’s a very dramatic role or emotional scene. I value actors who truly are collaborators in creating the story and so I tend to gravitate toward actors who are both deep, rigorous thinkers, who take their work seriously, and who have a sense of humor in and about whatever they are doing—that combination is a key part of the room I want to be in.


4. Jumping off a theme from Sunday, how important do you think your early 20s is in shaping the rest of your life? Was there an event or job in that time that shaped yours?
I think it's an enormously formative time. For me, many of the friendships and relationships I had during this time formed my framework of who has stayed in my adult life as a kind of intended family of close friends, and many of my closest artistic collaborations were also formed during this time. The jobs I had taught me so much, the mistakes I made were devastating and completely embarrassing but I'd never take them back. A major break-up in my life around this time shaped my life quite enormously—it was the most painful thing I've ever gone through, and yet, paradoxically, I wouldn't wish away the experience. It absolutely, fundamentally shaped things about my adult life that I'm enormously grateful for.


5. If we were joining a Lee Sunday Evans book club, what would you choose as the first offering?
Too hard to choose! The Sport of Kings by C. E. Morgan, a riveting portrait of our country; Milkman by Anna Burns, the most engrossing language I've read in a long time; Barkskins by Annie Proux, revelatory about how generations of capitalistic treatment of our country's landscape; and Stamped from the Beginning: The Definitive History of Racist Ideas in America by Ibram X. Kendi, absolutely essential reading for every single person living in this country, I'd want to have a series of book clubs devoted to discussing this.

7. Which play or musical really rocked your world as an audience member and influenced your point of view as an artist?
A production of Oedipus that Robert Woodruff directed at A.R.T. when I was a student in Boston. I was a house manager at the theater during college, and so I'd stand in the back to let in late seating and I watched the show probably a dozen times. It was an education, and there are many things about it I won't forget—but at the very end, Oedipus is blind and leading his two daughters out of their city—it was devastating. Something happened, he collapsed on his knees, and one of his daughters—Antigone!—yelled, from the bottom of her heart and guts, with big drawn out vowels, Pater! And then a huge curtain fell and the lights went out. It still makes my heart pound to remember it. 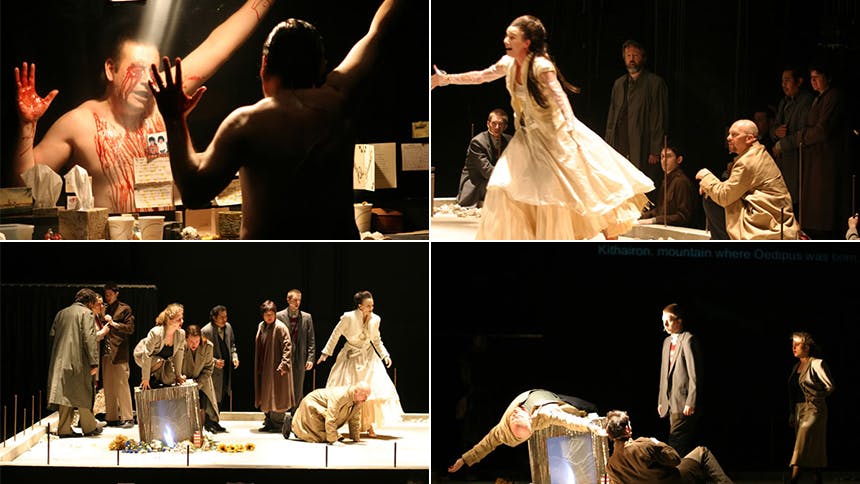 Sunday
New
Best Priced Tickets
Newer
#Mood: A Beetlejuice GIF That Captures How Each Day-O of the Week Feels
Older
Who Is Anne Teresa De Keersmaeker? Get to Know the Work of the Acclaimed Belgian Choreographer Reimagining West Side Story For Broadway