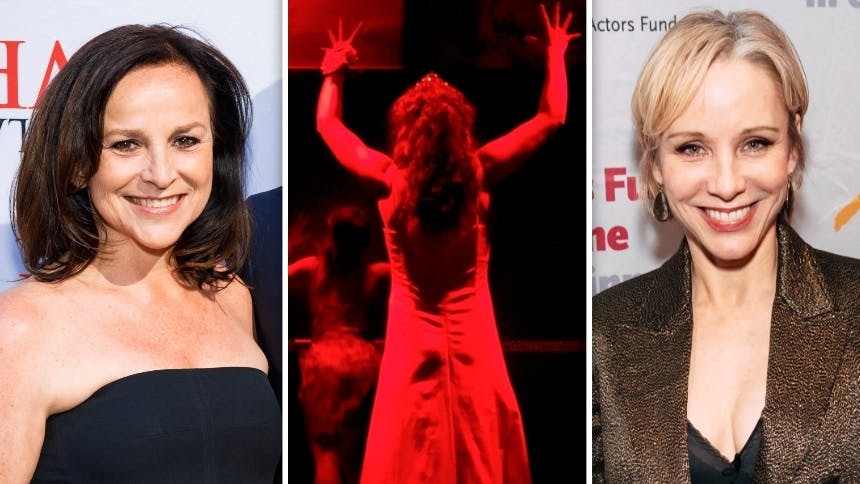 Any other unsuspecting hearts out there? We are still thoroughly obsessed and have been binging the entire Out For Blood Podcast which takes musical theatre fans through the storied journey of the musical Carrie from page to stage in the most historic fashion (including that memorable Act 2 opening "rap" number featuring pig noises).

The Stephen King page-turning thriller was adapted for the stage making its Broadway debut in the spring of 1988 following an out of town tryout at Stratford's Royal Shakespeare Company. The musical ultimately only played 21 performances on Broadway which you can learn all about in this amazing podcast hosted by Chris Adams and Holly Morgan. Aside from Chris and Holly's fabulous rapport, our favorite aspect of the series is getting to hear directly from the company that was in the room via funny anecdotes, audition memories, houseboat rentals and more. Friends of Carrie will be excited to hear from Linzi Hateley (Carrie White), Charlotte D'Amboise (Chris) and the lady celebrating her birthday today - inspiring this walk down Carrie memory lane - Sally Ann Triplett as Sue Snell.

Sally Ann Triplett made her Broadway debut in Carrie returning 26 years later in Sting's musical The Last Ship as Peggy White and as Mrs. Lovett in the recent Off-Broadway Barrow Street Theatre revival of Sweeney Todd. Sally is an absolute mainstay on London's West End appearing as some of musical theatre's greatest leading ladies: Grizabella in Cats, Donna in Mamma Mia!, Reno Sweeney in Anything Goes, Roxie Hart in Chicago, Miss Adelaide in Guys and Dolls and that's only a few!

So back to the matter at hand - like Chris and Holly of the Out For Blood Podcast, one of our favorite songs of that original Michael Gore and Dean Pitchford 1988 Broadway score is Act One's "Do Me A Favor." The song remained for the 2012 Off-Broadway revival too directed by Stafford Arima. Sally Ann's character of Sue is trying to convince her boyfriend Tommy Ross (Paul Gyngell) to bring outsider and constantly tormented Carrie White to the prom. Sue's sometimes friend Chris (Charlotte D'Amboise) and her boyfriend Billy (Fame's Gene Anthony Ray) are plotting revenge against Carrie since Chris is banned from prom for not apologizing for being cruel to Carrie. The result? The quartet of "Do Me A Favor" where Sally Ann is belting to the heavens. We're obsessed.

We have three totally throwback Thursday worthy clips of the tune travelling from the rehearsal room, tech and those bedazzled unitards on Broadway.

"Do Me A Favor" - Stratford Rehearsals


Paul Gyngell's Tommy Ross might be upstaging Sally Ann's amazing vocals with some full out dance moves courtesy of Debbie Allen's choreography at the beginning of the video but we love this clip. Sally Ann's vocal totally soars over the company during those last few verses and we can't help but rewatch starting at 3:54! Charlotte is so marvelous and serving scintillating sass throughout. Please watch Gene Anthony Ray's dance solo at 2:39. It is thrilling.

"Do Me A Favor" - Stratford Tech


It is so awesome to see Debbie Allen work with the company from the jump with those sharp, syncopated dance moves. We love a behind the scenes rehearsal moment. This video is such great quality and it's so fantastic to see the talented company perform Debbie's choreo. By 3:58 it's a full on musical theatre dance party and we're here for it. Neck rolls and synchronized snaps and all. Plus we get the scene where Tommy asks Carrie to prom with the company singing back up - it's A+.


Blink and you'll miss it - it's a short clip but thank goodness it's been preserved! At 10:31, get ready to get experience the Broadway company performing the tune - unitards, jazz hands and all!

Catch Out For Blood Podcast wherever you enjoy your podcasts!