Sally Ann Triplett Talks The Cradle Will Rock, Carrie Memories, Working with Sting & The Spice Girls, and Her Epic Anything Goes 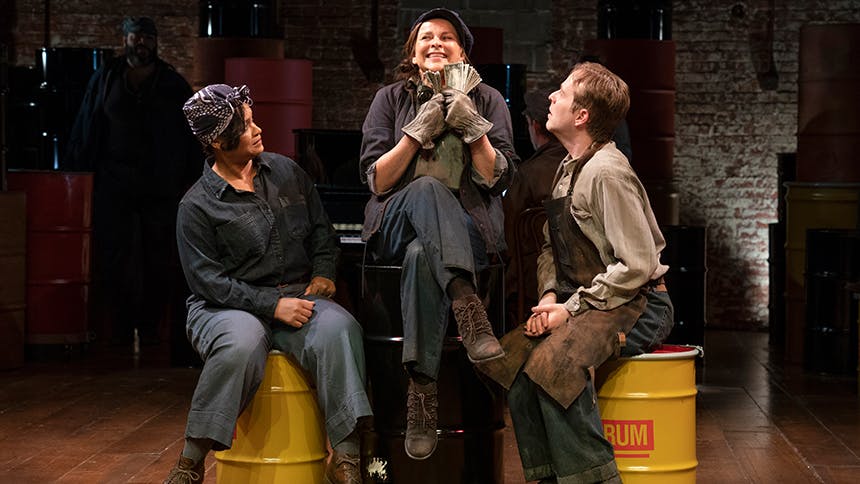 After recently starring in Broadway’s The Last Ship and off-Broadway’s Sweeney Todd, West End royalty Sally Ann Triplett is back in New York co-starring as Mrs. Mister in John Doyle’s production of the timely political musical The Cradle Will Rock at Classic Stage Company. Her big showstopper “Mrs. Mister” is an absolute delight.


BroadwayBox caught up with Sally to discuss working with director John Doyle, Broadway and West End milestones, and why she wasn’t a fan of TV fame.

1. What was it like working with Tony Award-winning CSC Artistic Director John Doyle on The Cradle Will Rock?
John Doyle is really like no other director I've ever worked with. I pray to the gods of stage to get a chance to do it again with him. I personally have a little bag of my musical theatre tricks that I carry around with me, and you have to just empty that bag—in fact, throw the bag out. Just switch half your brain off and be ready to be creative, to work as a team, and to look foolish, because the end product will be something that just comes out of being trusting of everyone in the room and not worrying about looking like a fool. He's got such an imagination, and, he's such a great human being as well. He tells such wonderful stories to help with what we're trying to work on. There's nobody like him. Full stop.


2. What attracts you to projects at this point in your career? Is there a difference between what you choose for New York vs London?
Usually I get asked, "What's the role you haven't played that you'd really like to play?" And I kind of hate that question, because what I look forward to is the process—whether it's an old piece or whether it's a new piece. I really look forward to the new people that I'm going to meet and the new ways of working—especially with people like John Doyle that I've never done before. There’s so many wonderful things about working in the U.K., and there's so many wonderful things about working here.

All that I really wish is that we actually listened to each other a little bit more, and took information and ideas from each other in lots of different ways. It's things like, I wish the U.K. would put more money into new writers; and I wish that here people didn't have to rely on just getting a job sometimes to pay for their health insurance. It's more of a business here because it has to be.


3. How do you approach a big musical number, be it “Mrs. Mister” or “Blow, Gabriel, Blow” or “Show Some Respect”? What’s your process for finding a moment?
It's always the same. It's always the text. That's all it is, really, because when you sing, it's just another way of speaking. There's no difference whether it’s Cole Porter or Sting or something more poppy even, like ABBA. I remember when I was doing Cats, I was playing Grizabella, and I thought, "How am I going to approach being a cat?" sort of thing. But I just took the song, “Memory”, and just went through it and decided away from the song what my character was and my past and my present and future dreams and hopes and what's happening in that scene right there and then. It's just an extension of yourself. It should always just be a continuation of the story.


4. For you, what was the biggest difference between working with Sting on The Last Ship and the Spice Girls on Viva Forever!?
They both had huge expectations behind them. The thing with the new, fancy, expensive musicals is that there's always going to be a pressure on top of them, because you want them to work and you want them to be huge hits. [Vivia Forever!] was supposed to be Judy Craymer’s new Mamma Mia!, and she wanted it to be as successful. She wanted it to still be running now and to open on Broadway, etc, but it didn't happen. I think they're quite similar in that there's so many people involved in them. At the end of the day, really, it's about does it feel right? Is the story right? Is it going to connect to people? Does it move people? Does it make people happy? And that's really the questions that you have to ask yourself. I can pinpoint why Viva Forever! didn't work and I can pinpoint why The Last Ship didn't work looking back on them. It's just this expectation. And sometimes when you have the expectations, people make wrong choices, and then those wrong choices are expensive choices.

5. You made your Broadway debut as part of the infamous Broadway production of Carrie. What’s your most livid memory of opening and closing that show?
It was so long ago now; I was 25. I remember how wonderful it was to work with Americans because [the cast] was half English half American, right down the middle. So Carrie was English but Carrie's mom was American. It was just so brilliant and interesting to see how they worked, how we worked, and how it all came together at the end. What I remember about opening night is that sort of thing that you'd see on an old black-and-white film: I remember us all being at a party and all waiting for the review from Frank Rich. Everybody waiting. And then somebody literally running in with a handful of newspapers and handing them out. Then, obviously, the rest was to follow because we ran for two and a half days.

Othing that springs to mind on our closing show was Darlene Love. She, of course, was one of the most incredible vocalists from the ‘60s. But when she joined Carrie, she had to sing a certain way. She had to hold back because she couldn't riff and do her normal thing. On the very last show, Darlene Love went out there, and she sang the shit out of her song. I just remember hearing it at the time, and we were cheering and screaming. It was so amazing. I'll never forget that.


6. At the time, if you could have transferred any West End production you’ve been a part of to Broadway, which would have been the dream?
Anything Goes. At one point Trevor Nunn said, "We're on our way," and it just didn't happen. The thing I was so gassed about was that they did a film of Oklahoma! and they've done so many films since, but Oklahoma! was one of the first films they did at The National. The Cole Porter Estate wouldn't let us film it, and it was the most unbelievable production. People actually say to me that it was seeing our production that prompted them to go into the profession. It was so powerful and beautiful, and everything was a perfect storm. I know it is bad to say, but people talk about Patti LuPone and such great productions here, and I just have to bite my tongue because I know that our production was so wonderful.


7. You were a big presence on UK TV in the early 1980s, appearing on Eurovision, Crackerjack!, and Top of the Pops. What’s the most random fan encounter you recall from that time?
I got that every day. We were very, very, very recognizable. It came like a bolt out of the blue—all of a sudden, we were on the telly nearly every day or on the radio or in a magazine. I do remember being on the Northern Line one day, and this little girl was on the tube, and she looked up at me and she went to talk to me. She was open-mouthed but she didn't know why she knew me. Everyone famous has that story. It was a funny time. I don't think I'd want that again. I don't think I'd want to be sort of recognizably famous. It doesn't really interest me to be honest. All I'm doing is doing the job—this thing that I love. And I'm so lucky, at my age, to still be doing it.


See Sally Ann Triplett in The Cradle Will Rock at off-Broadway’s Classic Stage Company through May 19.