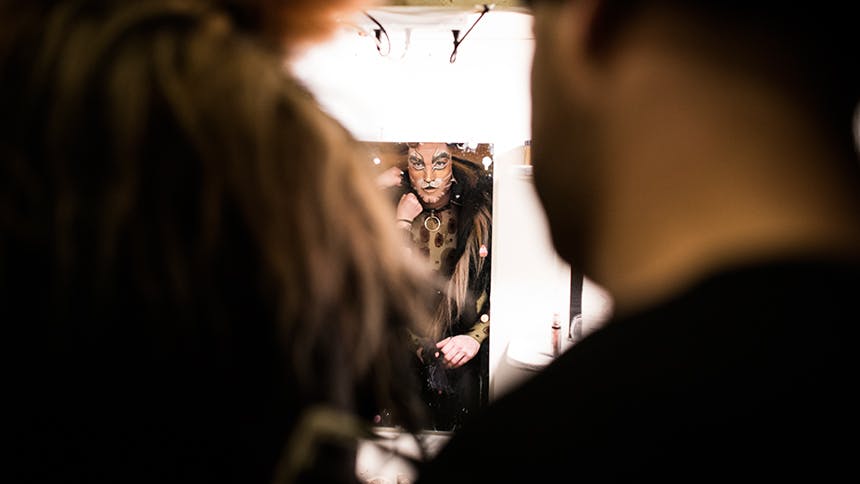 . He opened the show at the Neil Simon Theatre in July 2016 and remains one of the revival's only original cast members still serving 100% at the Jellicle Ball.


BroadwayBox spoke with the triple-threat performer about how he created his own Tugger, his own backstory, and the famous touchstones that inspired him.

Let me preface this all by saying this is purely just my interpretation of him. I know that in the Gillian Lynne version of Cats, there is a lot of literature and character backstories that already come with the show, but since Andy Blankenbuehler reimagined it, that gave us the opportunity to really create our own stories from the ground up. I didn’t use the movie or any previous Tuggers as a reference really because I wanted a clean slate.


I go into a process with a lot of ideas and hopefully one of those ideas will stick. In preparation, before we even started rehearsals, I looked a lot of Freddie Mercury. I know Andy had an idea where he wanted to take this character, but for me I knew that I just needed some reference points. Freddie Mercury was a big one; Prince was a big one; and Bruno Mars was a huge one—the way he moves and how funky he is. I studied a lot of footage of all of them. That’s where I started.

Then when we started on day one, I saw a Tugger costume sketch, and the way his body was drawn on this sketch (everything was turned in and broken) it looked like a scarecrow. That image immediately made me think of Bob Fosse, and that is a world and a vocabulary I am very familiar with because one of my first jobs was the first national tour of Fosse. I figured physically I’m going to start here and build from there.


As the rehearsal process went along, Trevor Nunn really encouraged me to be myself. I had a lot of people telling me, “This is who Tugger is. Or this is who Tugger is.” I was just trying to crack the spine of the character and I was trying everything. I have a very broad sense of humor, and one day in rehearsal Trevor said, “I’ve been observing you, and half the time you’re this very confident professional and the other half the time you’re a five-year-old kid.” So I just started exploring the two extremes of being this rock god and being a five year old. It sounds ridiculous but that’s where a lot of it started to come together.

The biggest inspiration for Tugger is my cat Chimbley. I have two cats, brother and sister, solid black. Annabelle is the female—she’s sleek, short-haired, and so loving. Chimbley is the male. He’s long-haired, kind of fat, and his objective in life is just to be loved...but along the way, he can be such a little shit. If you’re not giving him attention, he’s throwing up everything, knocking things over, or singing in the middle of the night at the top of his lungs. It’s his world that we are all living in. I recreate so much of his behavior onstage—the way he stretches and the way his attention span is very short.

Another inspiration for me is one of my best friends in the world, Alisan Porter. (She was Bebe in A Chorus Line with me.) When we were in rehearsal for Cats, she was on The Voice—and ended up winning The Voice. Alisan was a huge inspiration for my Tugger. She has this rock sound in her voice, and I wanted to take Tugger’s sound in that direction. I built my walk as a mix of Freddie Mercury and Alisan. There’s an episode where she was singing “Cryin’”by Aerosmith and she just stomped down center stage, and I said, “That’s the walk right there!”


For me, shoes and hair are the biggest things in creating a character. I knew I was going to wear this massive wig and once I was in the Tugger gear it would click, and it did during tech. It started going in a different direction and I started exploring the way I see Tugger. Beyond being this rock god and five-year-old child, he has these multiple personalities. There was a lot of inspiration I drew from Johnny Depp as Jack Sparrow (he’s flamboyant and silly), and it sounds silly but Herman Munster (how he laughs).


With the story and backstory of Tugger that I created. I know a lot of people have different theories of the relationships in the show—but for me, I talked early on with Andy Huntington Jones about Munkustrap and Tugger being brothers. He’s like Prince William and I’m like Prince Harry. On day one, Trevor Nunn told us Munkustrap is the chosen prince and that was something resonated for me. Also in my story, Munkustrap (the chosen prince) and Macavity (the bad seed) are my brothers. It’s one, two, and then I’m the youngest—the wild child younger one. I created a story with every single character on stage but the most important ones for me are with Deuteronomy our father and my two brothers, Munkustrap especially.

Initially I had used Prince Hal from Henry IV because he uses his bad behavior as a disguise. Then over the year, the story evolved. For me—again this is all me—the reason why this night is so different is because this is the night Tugger realizes I have the same powers as Deuteronomy in my own way. I have this gift that no one expects. I start to realize there is more to me than I had thought, and maybe there’s a place for me in this tribe and in the ranks of what’s to come. I need to be active onstage and relationships are really important to me. When people see Cats they tend to feel like "the plot is thin" but there is so much happening. The stage is filled with talented creative actors, and with this production they really encouraged us to create our own story—there is only so much we’re given from the book of poems.


Once I was through with the initial excitement of getting the job, I became super nervous about playing this role. Terry Mann is such an idol of mine. Those are tough shoes to fill. Everyone has their own way of going about things and I knew people had a set idea of what Tugger is because of the John Partridge film version. I stayed away 'cause I didn’t want to torture myself by comparing and just allow my own process to happen. Once I got all my fear out of the way, I had to keep my headspace clear. I have to do me and be truthful to what I created. I don’t own the role, Terrence Mann doesn’t own the role, John Partridge doesn’t own the role. There are a thousand different interpretations of this character (maybe more!), and it’s cool to see everyone put their twist on it. It’s a character you can really do your own thing with because there are a million different ways to be Rum Tum Tugger.