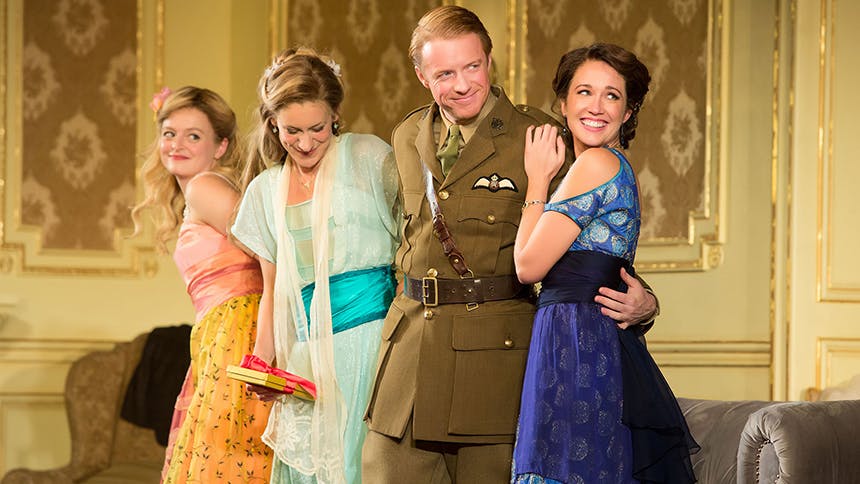 After appearing on BAFTA and Emmy Award-winning TV series in the UK, British Matthew James Thomas starred on Broadway as the title characters in the headline-making Spider-Man: Turn Off the Dark and the Tony-winning revival of Pippin. He currently gives a fantastic performance in his first non-musical credit on Broadway. Matthew plays Robin Conway—the golden child who returns home from the service in 1919 full of promise, only to become a broken alcoholic and failure 19 years later—in the acclaimed Roundabout revival of J.B. Priestly's Time and the Conways

BroadwayBox caught up with the MJT to talk about the complex Robin Conway, his exciting and frustrating experience as Spider-Man, and what it was like to hold a lightsaber.

1. How did you begin plotting out the journey of this complicated character?
Well I’m always interested as to where the author has put the character and why. Robin is his obviously his mother’s favorite who we see has deteriorated quite profoundly the other side of Priestley’s 20-year time machine in 1937. And he could very well just be a convenient (and loud) metaphor, assembled of all things selfish and capitalistic, put there in his jodhpurs to embody perhaps the grossest character representation of blind greed strangling a person (Or a political landscape) from the inside out…I mean…Priestley hasn’t written a word in this play that isn’t a stab at class systems and the utter nonsense of snobbery. And, I love him for it. But he somehow masterfully wrestles all that in to a real boy with a simple and vulnerable mind, coddled by his mother, desperate to escape, jealous of his near saint like brother who "takes after his father”—a father who is no longer around to help Robin develop and see things more clearly. Almost every time I speak through the character, I feel a whirl of fear and insecurity come up into my throat and then I’m left with only the words to push it all back down again. Like a virus wanting to consume me, held back only by the brash bravado or ignorant statements…all softened eventually and unfortunately for Robin, by the drink. He is at times a horribly uncomfortable body to be in…weak, desperate, either distracted or manic. That said...I like to think there is hope for Robin, as (perhaps) Rebecca is suggesting by her beautiful development of the set transition at the end. It may be a secret I shouldn’t share and like all good direction it leaves the story telling up to our own interpretation… But occasionally I like to think by the end of act three, Robin has felt a touch of the premonition through his sister, and so might better find his way. Priestley doesn’t mess about that’s for sure. He was putting out a warning. And, well…he wasn't wrong was he.

2. What piece of direction did Rebecca Taichman give you that most informed your arc as Robin?
Rebecca is very nurturing and offers very consistent and careful nudges in the right direction. It was informative to see Rebecca, having done the piece before, still being so passionate about it, and it was a wonderful treat to inherit that energy and experience from her while then being encouraged to brew it into our own. I would say our main focus together was on connecting the subtle connections of storytelling from act one Robin to act two Robin and making sure they sparked clearly and as effectively as possible. I remember saying about Robin in act two during rehearsals (not so eloquently), “It’s as if he is still trying so hard to be act one Robin” and that became something she carefully reminded me of in the process of developing who and what he becomes. It is also so troubling to think about Robin’s future post act two. On my darker days I often think about where he might go from there beyond the loop of Priestley’s time machine.

3. You made your debut as the title character in Spider-Man. What did that experience teach you about yourself and about Broadway?
Oh man, that’s almost 8 years ago. I did the show for two and a half years, it was supposed to be 6 months for me but...well, you know the rest. I was frustrated with it, in love with it, excited by it and humbled by it. It. Was. So. Nuts. (In the best and worst ways.) Of course the hysteria made sense but it was all very conflicted and confusing, it baffled me...and it was nauseating to be in the cross fire. All of a sudden, I was experiencing two truths. The one that was in the theatre, right in front of my eyes, and then the one that people were racing toward on the outside that wasn’t accurate at all but also wasn’t completely incorrect...and the feeling of that enormous pressure shielded only barely by the thin walls of the theatre. I was young you know—still am—and to get hit with that fast and hard right in between the eyes was sort of amazing and terrifying all at once.

4. What was your highlight and lowlight of Pippin?
I had just sort of real time experienced a "Pippin" journey in Spider-Man. I mean it wasn’t the first time because it’s what actors do all the time...go join a mad circus, learn something, say something, leave. Repeat. I’d been addicted to that since I can remember.

But with Spider-Man I had (truly) left home (I moved to NYC...another time zone) I had a massive, lengthy depression in England and, yeah...found myself standing at the end of the stage like Kay. So I basically ran, hoping to find some real, honest…something…and joined a circus (Spider-Man which was quite the circus both personally and professionally) and I said yes to (almost) everything. And then...came out the other end...

I found the character of the “actor” playing Pippin far more interesting than the wavering story of the Pippin character. He felt less and less like a character to me and more of a device for show to shape itself around. I developed over time this unquenchable thirst for the audience and cast to do and find something real together. I felt that the only palpable truth, that could be tracked by an audience as honest was his utter confusion and torment, in alignment with my own. It was the only way for me to not feel like a phony act while I was being pulled along by this massive impressive all-singing all-dancing machine. Every time I tried to play the Charlemagne/Pippin side of the text with believability, I found myself in the next scene or song, thwarted by a lack of story continuity. It reminded me of my own life so desperate to do something real, on a stage. I found it very difficult to articulate…I often do at first. But I felt responsible and if I could cut through and reach even a few members in the audience, then it was worth the fight and the risk, because ultimately that’s what I think you should be paying for when you come to see a Broadway show.

5. What can you tell us about your Star Wars: The Force Awakens audition? Was that a crazy experience?

Yes. It was crazy! Can you imagine? And when it came to it...I realized the idea of holding a lightsaber was still more important to me than being alive.

For one of the later tests, I had done 11 shows of Pippin in a row (can’t remember why, some holiday forced the schedule or something) and my agent phones telling me, “You’re going to LA…Tonight." I had no voice or brains left… Flew out on the redeye and couldn’t sleep because they gave me another scene just before I took off…it was maybe 6 short lines. It was the first time I had ever flown business, and this very toned guy with a shaved head laid his bed down flat, positioned his bumhole toward my face and farted protein farts for the whole flight… But at least it kept me awake. At this point I couldn’t remember if I had a face or not and pretty sure I was 107 years old. The next morning, I downed two American sized red bulls and was whisked off to Bad Robot and into the room with JJ Abrams, April Webster and Alyssa Weisberg. I somehow felt alive and awake again…can't think why… JJ made it feel like we had all the time in the world, we worked it for a few hours. Easy to see where his success has come from. It was awesome.