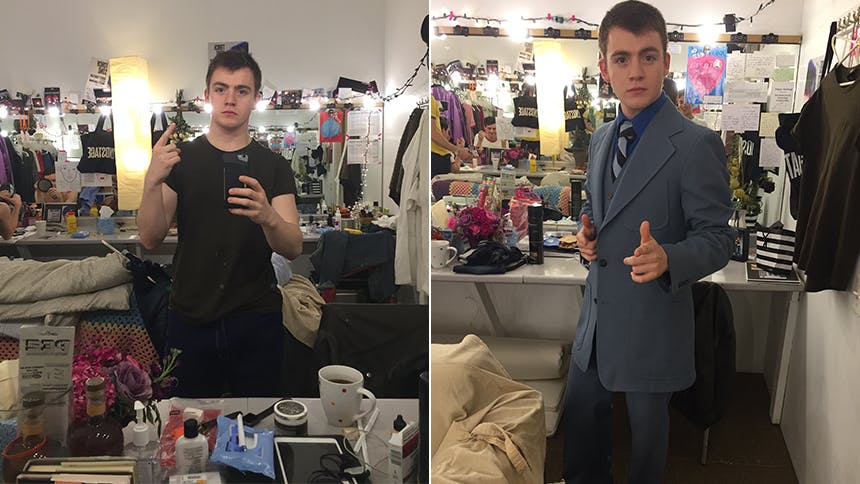 
Scroll on as BroadwayBox gets to know Jack a bit better as he talks about creating his endearing Torch Song character, working on Marvin's Room, and more.

1. What did Harvey say to you that most informed your performance as David:
Harvey and I talked a lot about the importance of David, and I really wanted to bring something new and real to this role so there was a lot of discovery with this part; but one thing he said to me that really shaped my approach into David’s world was, “If you’re not embarrassing yourself every night, you’re doing it wrong!”

2. What are three words to describe what you were like at David’s age:
Energetic, driven, independent.

3. The Torch Song company seems so close. What’s the secret to that:
Now this is a big secret that I don’t like to share with everyone but the biggest way to make everyone believe we’re a close cast is to really be a close cast.

5. You keep hitting the co-star lotto, what actor and actress is on your dream list to work with:
I can honestly say that I don’t care who I’m working with as long as you love what you’re doing and are passionate about the craft and you’re not just there to collect a check, then I am thrilled to work with you. I’m fortunate enough to say that has been the case on every project I’ve worked on. But working with Amy Ryan would be cool too.

7. What’s your dream role for yourself in 10 years? In 25:
Look I just hope to keep working for the next 10 years, I’d be grateful to take on any role that speaks to me. If I had to choose though I’d want to originate a character I haven’t seen before.

8. What do you nerd out over that doesn’t have to do with theatre:
I play a lot of chess! I love going to the park and sitting down at a chess table with a friend and just playing chess for hours.

9. What movie have you probably watched more than any other film:
In my life, I’d say Good Will Hunting and Step Brothers are a close tie.

10. What piece of theatre totally rocked your world after you saw it for the first time:
I saw a show a while back called Buried Child at the New Group, same company where I made my New York debut, and it was just absolutely incredible. From the writing to the acting to the directing to the casting everything was just flawless and I feel very grateful that I got to experience such a visceral well shaped piece of art like that.

Torch Song
Best Priced Tickets
Newer
Todrick Hall Wants a Hairspray Revival & So Do We! Here's Our Dreamcast for the Nicest Kids In Town
Older
Flashback Friday: 15 Fabulous Black and White Photos of the Radio City Rockettes Through the Years
Sign up for BroadwayBox Discount Alerts