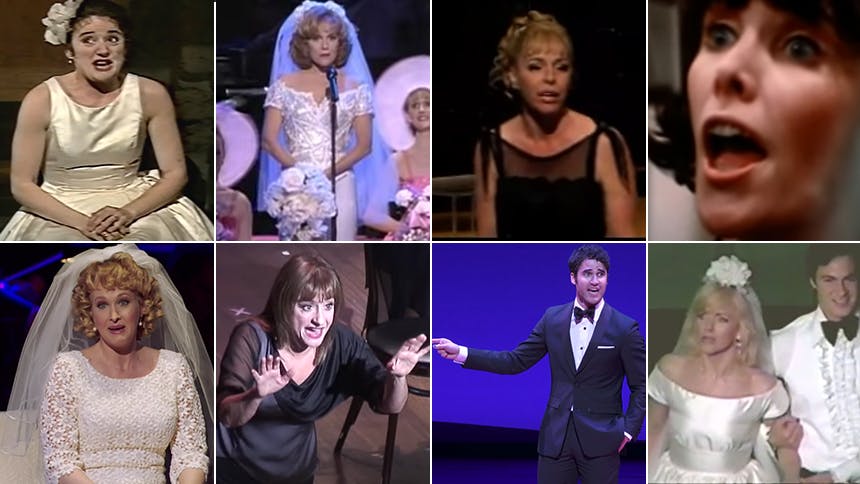 arrives at the Jacobs Theatre, Matt Doyle will be the first guy to perform Sondheim’s lightning-fast patter song “(Not) Getting Married Today” on a Broadway stage. Matt stars as Jamie, the best friend to Katrina Lenk’s Bobbie, who has a massive musical meltdown as he prepares to marry his fiancé Paul (Etai Benson) and delivers the anxiety anthem “Getting Married Today”. British actor Jonathan Bailey won a 2019 Olivier Award for his featured performance in the West End production.

As we eagerly await Matt Doyle’s sure-to-be showstopping rendition in the Broadway revival, let’s look back on some truly epic renditions of “(Not) Getting Married Today”.


Part of the now iconic D. A. Pennebaker documentary about the recording of the Company album in 1970. Watch Broadway’s original Amy, Beth Howland power through that song at that speed with Sondheim there instructing and watching.


What a perfect match of performer and song. The great comedian Madeline Kahn milks this song for everything it's worth. This is one you want to watch twice.


It only takes a moment for Katie Finneran to shine. She won her second Tony for a showstopping scene in Promises, Promises, and here she did it again. As part of the starry New York Philharmonic concert production in 2011, Katie brought every ounce of her comic genius to the role of Amy—these line readings.


Justice for Heather Laws and her incredibly memorable performance from the most recent Company revival in 2006. It was funny and fast and everything you want from this number.


Props to Dame Julie for singing the soprano and Paul’s verse herself before diving in as Amy. It’s giving Victor/Victoria vibes how she’s bouncing around here—it’s also impressive. You’ll hear shades of Eliza and Mary Poppins in there too.


In this revival, Patti recreates her Olivier-winning performance as boozy Joanne, but back when she and Mandy were in concert on Broadway, Patti passed the speed test with ease. Watch her breeze through these lyrics. It’s nothing short of impressive.


Veanne Cox is a treasure. She played the role of Amy in Roundabout’s 1995 revival, receiving a Tony and Drama Desk nomination for her stunning performance. This is not that production, but it is Veanne basically inventing musical comedy so…


While we are in the boot section, here’s Tony Award winner Alice Ripley in the 2002 Kennedy Center production. She does not disappoint. It’s entrancing. That extended applause speaks for itself.


The Tony nominee is a foremost interpreter of Sondheim, so it’s always a joy to see what she does with a number. Here she sings the soprano (‘cause she can), there’s veil work, and there’s a speedy, funny delivery. She could totaly play Amy in a full production.


He is flying through this song. It was jaw-dropping. Good for Telly!


This is from the 1995 Donmar Warehouse production directed by Sam Mendes. Sophie received an Olivier nomination for her unique performance.


Another comedy legend puts her indelible stamp on the song. It’s not the fastest version, but gosh is it funny.

Don’t miss Matt Doyle performing “(Not) Getting Married Today” in the new production of “Company’ at Broadway’s Jacobs Theatre.

Company
Best Priced Tickets
Newer
Get to Know the Families at the Center of Richard Greenberg’s New Comedy for MTC, The Perplexed
Older
Introduce Yourself(ie): 10 Questions with Blues for an Alabama Sky Star Alfie Fuller