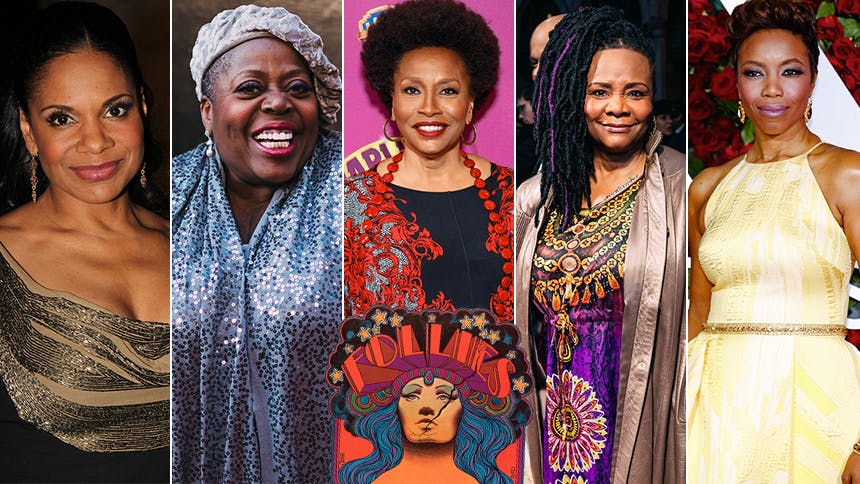 
This Black History Month, BroadwayBox shines a spotlight on the incredible talent of African American performers working on Broadway today by reimagining revivals in the tradition of Pearl Bailey’s Dolly (and the recent hit West End production of Death of a Salesman). In most big revivals on Broadway today, maybe one principal character is played by a black actor, but these dream revivals feature casts of black Tony Award winners, nominees, and breakout stars. Kicking off the festivities is the Stephen Sondheim and James Goldman’s musical Follies, last seen on Broadway in 2012. Cue Roscoe singing "Beautiful Girls".


This is a no-brainer. The actress who has won the most Tony Awards in history singing “Losing My Mind” and “In Buddy’s Eyes”. Invest now.


Just imagine how passionate her “Could I Leave You” would be? Also, audiences would need oxygen after this Tony Award winner did her “Story of Lucy and Jessie”.


Who better to sing “I’m Still Here” than the Mother of Black Hollywood, the should-be Emmy winner for Black-ish and a Broadway baby to boot? If there ever was a gig for Ms. Lewis on Broadway, it is playing Carlotta in Follies.


It’s a little Ragtime reunion having Tony winner Brian Stokes Mitchell star as the successful but unhappy Benjamin Stone. He has the gravitas to make you believe everything in life worked out for Ben.


Rounding out the unhappy couples is the three-time Tony Award nominee currently wowing audiences in Broadway’s A Soldier’s Play. He’s steeped in the worlds of comedy and drama, and he could bring such depth to Buddy.


To sing Sondheim’s iconic “Broadway Baby”, Tony Award winner Tonya Pinkins. No one sells a number like Tonya, whether it’s “Lot’s Wife”, “Play The Music for Me” or “Black Is a Moocher”.


Just a pair of Tony Award winners singing “Rain on the Roof” together, ‘cause dream big.


Ending the first act (going off the revival model) would be Tony Award winner Lillias White belting out her “Who’s That Woman” – not since her “Brotherhood of Man” will we have seen such a moment.


Heidi is always played by an older opera diva, so here we picked Grace Bumbry, a pioneer in African-American opera who received a Kennedy Center Honor in 2009. Yes, she’s 83 but she still has “One More Kiss” to give.


The Frozen standout is due for a breakout role, and she has a voice we want to hear soar in that “Love Will See Us Through”.


The Tony nominee for Once On This Island could channel that fierce energy of a young Heather Headley walking her feet off at the Metropolitan museum.


The star of Frozen and Hercules has that self-assured quality a young Ben needs to make his way.


For young Buddy, you need someone optimistic and energetic, and that’s Jelani Remy.


Hinton Battle won three Tony Awards within the 10-year span of 1981-1991 for his roles in The Tap Dance Kid, Sophisticated Ladies and Miss Saigon. He hasn’t appeared on Broadway in years and being the man behind the Follies would be a perfect way to return.

Newer
Get a First Look Video from the New Off-Broadway Hit Emojiland
Older
Get to Know the Families at the Center of Richard Greenberg’s New Comedy for MTC, The Perplexed