A Guy's Guide to Broadway: Great Shows For the Men In Your Life 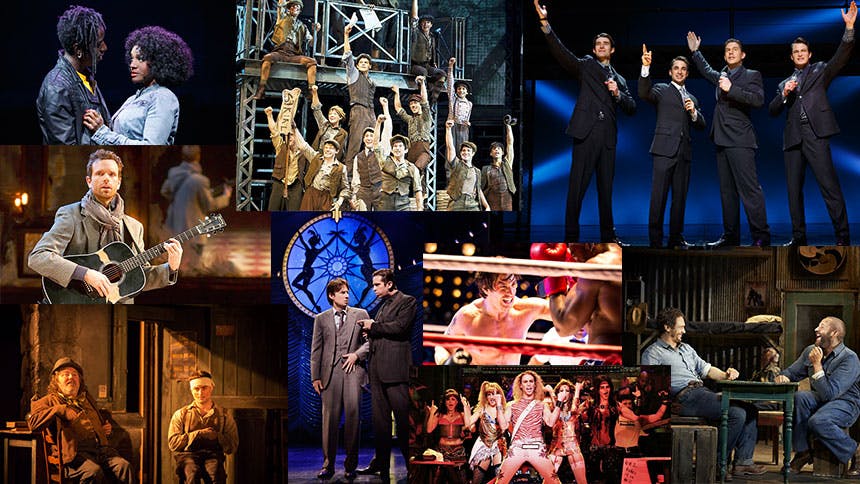 Let’s face it, most men are hard to shop for. Whether your looking for belated Father’s Day, birthday, graduation or anniversary, unless he tells you what he wants outright, it’s near impossible to pick the perfect present.

That’s why BroadwayBox has come up with this helpful little guide to help you choose the right Broadway show for the man in your life.


Jersey Boys is the right musical for a guy who has the oldies station as a preset in his car radio.


For the guy who is cracking jokes, a safe bet is The Book of Mormon. But if you don’t want to break the bank or see a musical, you get the same amount of laughs at Irish comedy The Cripple of Inishmaan, starring Harry Potter’s Daniel Radcliffe.


'80s hair bands, booze and babes: Rock of Ages is the musical for a guy who might not like musicals, but loves a good time.


It’s your son/nephew/neighbor’s first Broadway show and you want to make it count. The way to go is Disney: Newsies has incredible, Tony Award-winning dancing and a strong story about young men coming into their own; The Lion King is a classic father/son musical with stunning visuals; and there is no show on Broadway more magical than Aladdin.


He’s probably read up on the revival Of Mice and Men in The New Yorker or New York Times, and how can you deny him the privilege of seeing this Steinbeck classic come to life in a gorgeous, masculine and moving revival starring Chris O’Dowd and James Franco.


Tear him away from ESPN for one night and bring him to see Rocky. The physical boxing elements of this production are unlike anything he’s seen before on Broadway, and there’s a sweet love story at the center of the musical that takes you from ringside to bedside.


The Tony-winning revival of Pippin is perfect for a graduate, your friend going through a quarter-life crisis or just the fella who dreams big.


For the guy who has a complete box set of The Sopranos and the re-mastered Godfather trilogy, try Bullets Over Broadway. It’s a musical about guys, dolls, mobsters and Broadway in the roaring ‘20s.


If your guy is the first one on a dance floor at a wedding, then Motown is the toe-tapping musical for him. He’ll have new moves for years to come.


Only a short train ride from Bedford Ave, the Jacobs Theatre is home to the hippest musical in town: Once.


Gang wars and Tupac are at the center of the newest Broadway show Holler If You Hear Me, but don’t worry your guy doesn’t need to be a rap aficionado to enjoy this hip-hop musical about struggle, family and bettering yourself.

Holler If Ya Hear Me
Best Priced Tickets