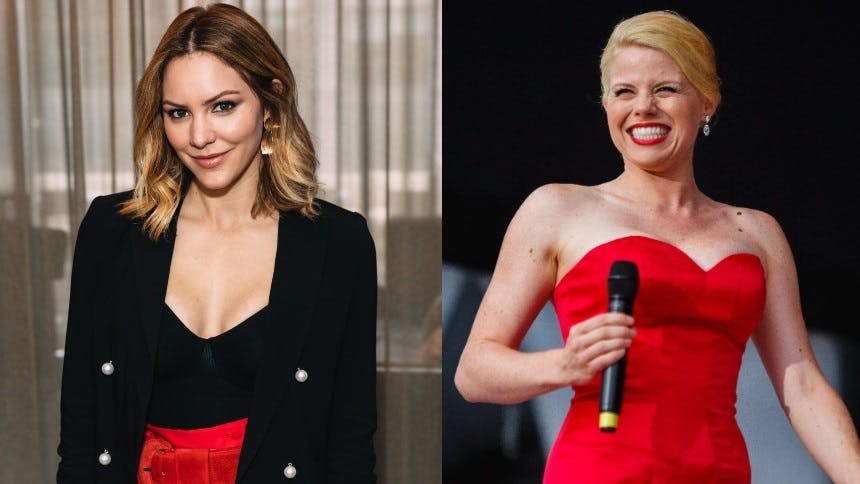 #TeamKaren? #TeamIvy? NBC's Smash fans have something to cheer about tonight at 8pm with the livestream broadcast of Bombshell in Concert at People.com.


In 2015, for one sold out night only live at Broadway's Minskoff Theater, your favorites from the beloved television series came back for a special The Actors Fund benefit event. We get to experience this extraordinary event from our homes and hear "Let Me Be Your Star", "Don't Forget Me", and "They Just Keep Moving The Line".

With only hours away, we are highlighting 5 essential videos of each of our Marilyns singing fantastic musical theatre songs. As to not take sides, we will be fair and go in alphabetical order!


Let's remember this song was originally made famous by Carol Channing. Megan put her own fabulous, diamond encrusted stamp on the iconic tune.


She's a brunette! And she's accompanied by Stephen Schwartz! Megan swankified the Broadway and the National Tours of Wicked as Glinda.


It was sunshine epitomized when Megan played Doralee, made famous by Miss Dolly Parton herself, in this film to stage musical adaptation. That's some fierce belting, Megan!

"You'll Be Back" (Hamilton)


We will remind you of our love all the time Megan! All hail the Queen!


Megan's hubby Brian Gallagher joined her onstage for this legendary musical theatre duet. Make that trio - her sweet baby needed to be rocked throughout or her crying would steal the show! Still sounds incredible!

"She Used To Be Mine" (Waitress)


What can we even begin to say about these pristine vocals? Katharine played Jenna on Broadway and the West End. Please come back soon!

"What Baking Can Do" (Waitress)


It was impossible to choose only one Waitress tune. She is so charming and this performance is amazing! Honestly - we're also jealous we didn't get the autographed merch. You'll see!

"Something to Shout About" (Betty Boop)


Katharine's talented husband, renowned music writer/producer Mr. David Foster, wrote this for a forthcoming Betty Boop musical. It is so wistful and dreamy and Katharine's vocals are pitch perfect.

"I Have Nothing" (The Bodyguard)


This clip was a special movie night performance from her Kat & Dave live shows. Another blockbuster song by David Foster with outstanding Kat vocals. How we love a key change!


We've got another trio as Katharine brings her two pups Wilma and Larry onstage with her! She sounds gorge on this Ahrens & Flaherty number.

Newer
Hot Clip of the Day: A Solo Saxophone and "The American Dream"
Older
"Welcome To The 60's" with our Gif Review of HAIRSPRAY!
Sign up for BroadwayBox Discount Alerts