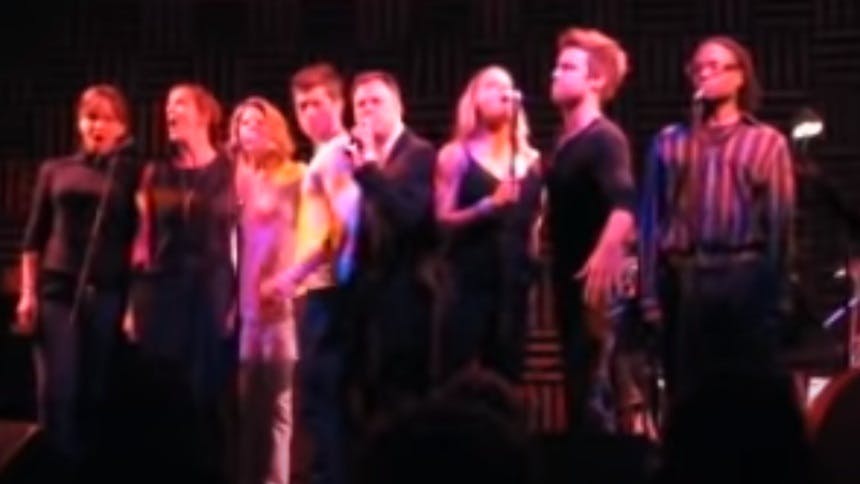 
Ulterior Motives: We are back from a three day weekend and we wanted to bestow our BroadwayBox friends with one of our very favorite Broadway clips.

Back on October 6, 2008 - something magnificent happened at New York City's Joe's Pub. Tom Kitt brought together his talented pals to sing songs from his musicals. Who were his pals? Buckle up! (In order of appearance) Aaron Tveit, Gavin Creel, Billy Porter, Amy Spanger, Kelli O'Hara, Alice Ripley, Julia Murney and Brooks Ashmanskas. Cool? Cool. What follows is a tornado of flashlight choreography, outstanding rock vocals, high belted harmonies, some Creel dancing in the audience pre-Hair. It's a Broadway fan's dream come true

Ultimate 🙌 🙌 moment: How can you honestly pick only one? Aaron Tveit starts with the solo line then volleys it over to Gavin Creel. The whole song is an embarassment of riches and we love when we can pick out each of their distinctive voices. Brooks busting through the cast with his signature bass notes and then impasssioned "mama mia, mama mia."

Our ultimate moment though, because how can you pick one ultimate vocal moment, is at 4:37 where you see Gavin look to the audience to see where he's going to jump into the audience. On that "for me!" he bursts like a rocket at 4:41 jumping onto a landing for one of the song's most rocking parts. The rest of the cast shine their flashlights on him from the stage. It's all so theatrical and wonderful.