Matt Harrington Takes On Seven Questions About The Play That Goes Wrong, How John Cleese Inspires His Chris Bean, & More 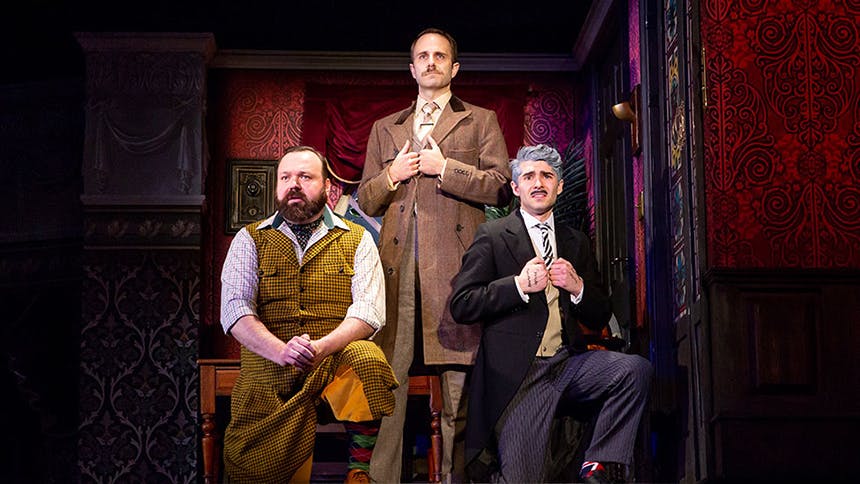 . The LOL play-within-a-play is like the love child of your favorite farce and your favorite disaster movie. BroadwayBox caught up with Matt to discuss the infectious joy of the show, the challenge in playing the tense director, and his Broadway master class.

1. What do you enjoy most about coming to work each day at The Play That Goes Wrong?
I would say it's a combination of the people I get to work with and the laughter this play creates each night. This is a marathon of a play—it's nonstop and it can be exhausting—but I'm incredibly fortunate to get to share the stage with one of the hardest-working and kindest group of actors and crew I've worked with. As my buddy Brent (who plays Robert) pointed out, there's an incredible amount of trust we have in each other, both cast and crew, and we're blessed with a wonderful group of people who always bring their A Game and also keep things fun backstage. And getting to be in a room every night with that much laughter, that much release, that much joy, it's infectious. It's medicine for the soul.

2. Has there been a time when your The Play That Goes Wrong co-stars have made the serious director Chris Bean break onstage?
Oh boy, this is a dangerous question. Chris Bean is a deadly serious man. But there have been a few moments, yeah. I won't throw anyone under the bus here, but if something goes astray and any one of us onstage ever starts to get that glimmer of a break in their eye it can quickly spread. We've been pretty good about containing it... for the most part.

3. Is it tough to play the straight man in a big comedy? How did you find your footing with this character?
One major point that Matty DiCarlo, our director, has always emphasized with us is that this is absolutely not a comedy for the actors onstage trying to perform The Murder at Haversham Manor. For them the stakes couldn't be higher, and the comedy is happening to them in a sense. In their ideal scenario, the play would go off without a hitch. For Chris Bean, this is one long tragedy as his dream play goes down in flames. One of the biggest challenges of playing Chris is living in that anger, that shame, and that anxiety, night after night. As actors, we train in ways to release tension, but for Chris Bean the tension just grows and grows as the play goes on. I've found that it's very important for me to find ways to step out of the role at the end of the night and shake off the emotional shackles of Chris Bean. Meditation and breath work have played a big part in helping me unwind. 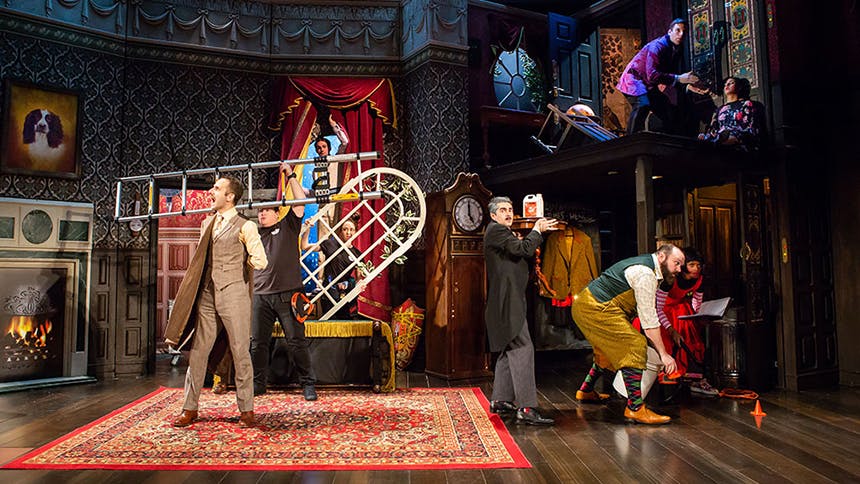 
4. What was it like being the only American actor in Broadway’s Twelfth Night and Richard III starring Mark Rylance? What did you learn during that run?
It was an absolute dream. Felt completely surreal. I remember thinking when I booked it, and as the play went on, that this might just be the peak job of my career. And I was fine with that. I played a handful of small roles and did a lot of understudying, but I was in heaven the entire time. Mark was incredible to get to work with and watch, of course, but the rest of that company was equally inspiring. Some of the loveliest people I've ever worked with. And our director, Tim Carroll, completely and forever changed the way I approach Shakespeare. It was an endless masterclass.

5. What’s the coolest or most memorable fan gift you received during your run in Matilda?
The Matilda fans are a very special bunch, and I think that the play really spoke to a lot of young people and gave them a message of hope and love and empowerment. I got a lot of beautiful drawings and even the occasional mixed-media sculpture. And, of course, the surprise Schmackary's deliveries to the stage door never lasted long.


6. Your major NYC credits have all been a bit British. Are you an Anglophile? What do you appreciate most about British culture?
I have definitely noticed this trend. There's clearly some karmic connection between me and the Brits; I'm pretty sure I was British in my last life. I'm an absolute Anglophile. My favorite semester in college was the one I spent in London studying at RADA. And anytime I've gone back to London, it's always felt like coming home. I just adore everything about it, the people, the language, the dialect, but more than anything I think I adore the British sense of humor. I (finally) got around to watching Fawlty Towers in preparation for Chris Bean. John Cleese is a godsend.


7. When did you know you wanted to be an actor? Was there a film or play that was very influential to you growing up that helped spark this journey?
I remember watching my brother play Conrad Birdie in a high school production of Bye Bye Birdie and I was enthralled. He took us backstage afterwards and my mind was blown when I realized that the set didn't keep going into the wings or behind the flats. That the staircases didn't lead anywhere. It was like magic to me. Then after not making the soccer team in high school and a failed run for student government, I found my way over to the drama department. I did Spoon River Anthology my freshman year and I was hooked. My plan up until that point was to be a pilot, but after my first couple high school shows I never looked back.

Get yourself over to off-Broadway's New World Stages to see Matt Harrington in The Play That Goes Wrong.