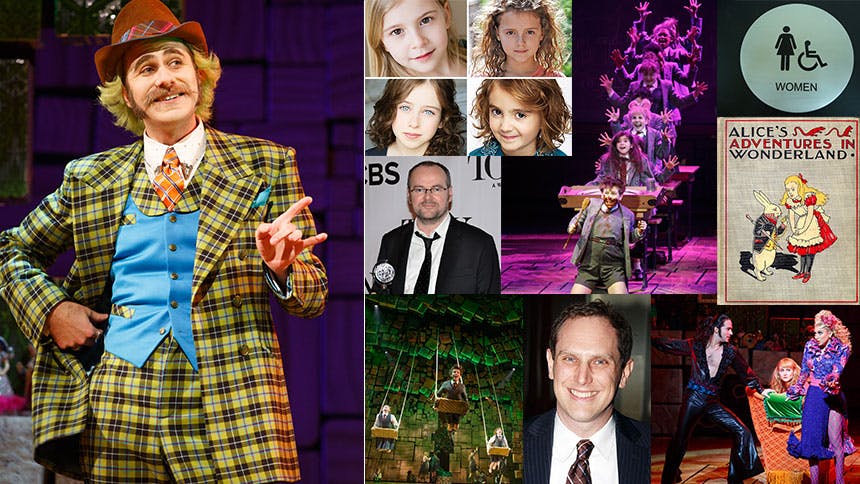 Ever wonder what magic goes on behind the scenes at Broadway's Matilda? Matt Harrington, who gets some of the show's biggest laughs as the title character's crooked father Mr. Wormwood, shares with BroadwayBox 10 super cool secrets about Tony and Olivier Award-winning hit musical.

1. We are OBSESSED with rituals. Pre-show, mid-show, post-show. From high-fives and fist-bumps to extensively choreographed interpretive dance pieces (solos, partner pieces, groups, you name it), there is an entire performance going on off-stage that audience never gets to see.

2. Our conductors like to keep things interesting on the video monitors. Mustaches and props will pop up out of nowhere for certain numbers, and Musical Director David Holcenberg has been known to exhibit some sweet dance moves when the spirit moves him.

3. The book that I take from Matilda and destroy every night is Alice in Wonderland. Apologies to Lewis Carroll.

4. We have a fantasy football league and we're serious about it. It's comprised of actors, stage managers, child guardians, musicians, as well as members of the crew and our company manager Kim. For many of us it's our first go at fantasy football (come on people, we are theater geeks after all) but we're very serious about it. So if we look a little distracted during our Sunday matinees, you'll know why.

5. The decorations on the Wormwoods' mantle are references to shows that opened with Matilda last year, including a record for Motown, a sequined boot for Kinky Boots, a pickup truck for Hands on a Hardbody, and a slipper for Cinderella. There was also once a plan to have the ducks on the wall move and sing along to certain songs but the idea got scrapped.

6. Every child actor that leaves the production goes through a graduation ceremony led by Ms. Honey. They get a diploma and everything. There are tears. It's adorable.

7. None of us knows which Matilda is going to be on for any given performance until half hour. Sometimes if I forget to check the board and I'm not listening during the half hour call (sorry stage managers!) I won't know who my daughter is until I see her in the wings halfway through the opening number.

8. The sports announcer who provides commentary on the Trunchbull's hammer throw (and can be heard describing Trunchbull again later in the show) is voiced by none other than our book writer Dennis Kelly.

9. Due to the layout of the theater, we have to pass through the women's restroom in the lobby to make some of our entrances and exits (don't worry ladies, it's partitioned during performances).


Now that you're in on their secrets, go see the Matilda company in action at the Shubert Theatre.