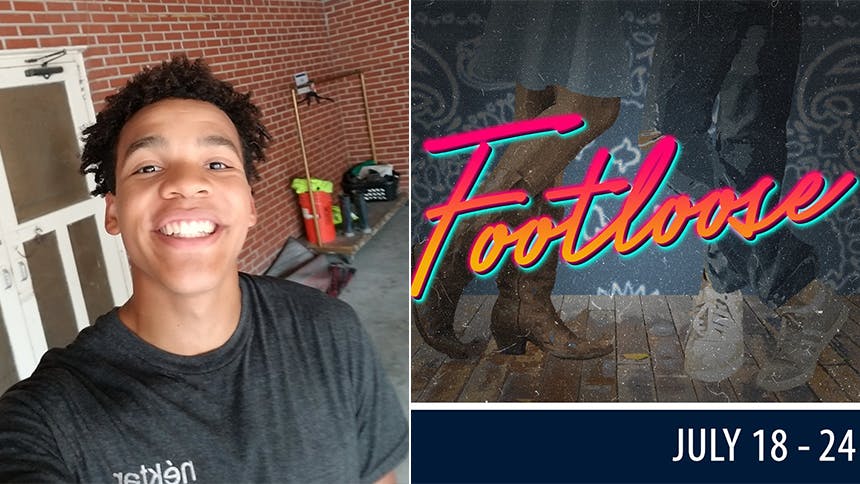 Before starting his senior year at the University of Michigan, Arizona native Mason Reeves makes his Muny debut leading their production of Footloose

as the dancing rebel Ren. Directed by Tony Award winner Christian Borle, this production co-stars Broadway’s original Footloose star Jeremy Kushnier as Reverend Shaw Moore and runs July 18-24. BroadwayBox caught up with Mason to discuss this breakout role, the unexpected way he was cast, working with Borle and Kushnier, and the impact of the musical Passing Strange on his life.


1. How did this Muny debut happen for you?
Well, it was entirely wonderful and completely unexpected! I was in rehearsals for our department’s production of The Exonerated at the time, and our director told us that if we had a good last run before the weekend he would cancel rehearsal on Saturday and allow us to head down to St. Louis for the singer call. Luckily, it went well, and me and a few other folks were allowed to head down to the open call at The Muny. I waited from about 8AM until 2 PM until I did anything at all on the day of auditions. After I got to sing my two 16 bar cuts, they had me hang around for two more hours. I sang my 16 bar cuts one more time for more people and then was given sides and asked to come back the next day to read for Ren. As I said, I was completely not expecting anything and to suddenly be noticed was a surprise, but I didn’t have any time to think or wonder why, I just had to prepare. I learned the sides and the song, “I Can’t Stand Still,” as best as I could and came in and gave them (and the dance call) all that I had the next day for the Artistic Director and Executive Producer of The Muny, Mike Isaacson, and the Artistic Associate, Michael Baxter (they taped my callback this day to send to Christian Borle digitally).  Two weeks later, I got a phone call asking for one last tape of me singing, “Almost Paradise,” the love ballad from Act II between Ariel and Ren, and then the next day I got an insane and ecstatic phone call with Christian Borle and preparations for this amazing opportunity began.

2. How do you find the stamina for this very demanding and physical role? Do you have an intense pre-show?
At this point, I’m still figuring that out, too! We just had our first full dress run this afternoon, as I’m doing this interview, and I learned quite a bit about what it’s going to take. Currently, my pre-show is sort of intense, but it’s more about discipline over the day than anything. Because the role and telling this story takes so much energy, there isn’t a lot of room to be expending any right before the show. My pre-show begins as soon as I wake up in the morning, instead, with a cardio or weighted workout, light vocalizations, and then a shower and a meal. I slowly warm up my voice throughout the day and am as gentle as possible to avoid strain and unnecessary exhaustion. Then, about an hour before the show I’ll do a meditation, a full vocal warm up, some light cardio so that I can stretch out safely, and finally I’ll practice any difficult sections of choreography or singing so I can go onstage without any reservations.

3. What’s been your favorite part of working with Footloose’s director, Tony winner Christian Borle?
It’s hard to pick only one! I guess, if I had to pick, my favorite would be his ability to create a completely safe, fun, and experimental environment that is still incredibly productive. He switches very quickly and gracefully between silly gags and fart jokes, and heartfelt motivation, advice, and inspiration. It has been a joy, to say the least, to work with him.

4. Did Jeremy Kushnier (your Muny co-star and Broadway’s original Ren) offer any advice?
Yes! He has offered me quite a bit. He is a truly wonderful human being and it has been such an honor getting to experience this with him. We’ve done a lot of commiserating about how crazy playing Ren is, and he has done nothing but reassure me and support me in this undertaking (on top of doing a brilliant job in his own part, as well). My favorite piece of advice that he’s given me has been to enjoy this experience more than anything. Life will not always present you with such an opportunity and such a challenge, and in those slower times you will long to be able to push yourself to your fullest as this show requires. Do all the work that you need to do, but enjoy yourself along the way, have fun, and really let loose when you’re on that stage. Don’t be afraid of releasing and accepting your happiness.

5. What’s been your favorite credit to date before Footloose?
This is a hard one! My favorite credit, I would have to say, was my experience on Passing Strange this past year at my school (this will be in my next answer, too, I’m sorry I love this show!). We worked with a guest director from NYU named Tiffany Rachelle Stewart, whose presence made the experience. She approached it from a devised theatrical perspective and relied heavily on the cast to imagine, experiment with, and ultimately live in the worlds that the protagonist, Youth, journeys through in his search for the “real,” something that continuously escapes his reach. Through this process, the cast and I were able to grapple with our own conceptions of the “real” and were inspired by our lovely director to challenge ourselves to take risks onstage and to interrogate our ignored fears within our own lives, as a result.

6. What’s a role you dream to play on Broadway within five years?
Here’s where Passing Strange comes back again, I’m sorry! I would love to be able to portray the role of “Youth” on Broadway in the next five years in a revival of some sort (it closed on Broadway in 2008). I discovered the show long before my experience performing in it last year—during my junior year of high school, actually. At the time, I was grappling with a lot of the same existential questions that Youth does. As a half-black young man in Cave Creek, Arizona, I didn’t have much diversity around me and it, ironically, forced me to fulfill a stereotype of what being “black” means. In order to fit in, I made myself the “black” kid, even though the stereotypical black experience and behavior I was emulating was something I had no true connection to. This filled me with an intense existential dread, but it wasn’t until I saw Passing Strange that I had seen a piece of art that gave a voice to and interfaced with the same problems that I felt so alone with. Because of this, and many, many other reasons, I would love to be able to portray this role and to bring such a poignant, intelligent, and challenging story back to Broadway.

8. When did you discover your love of dance? How has it changed as you’ve grown?
I really didn’t discover my love for dance until later. As I mentioned, I played sports (soccer) until the end of my sophomore year of high school when I finally quit for theatre. Prior to that, I had taken some voice lessons and acting lessons, sporadically, but had denied the pleas from my older sister’s Russian ballet teacher to come be in Swan Lake for my entire life (they needed more boys, of course). Once I got more into theatre during that sophomore year, however, I quickly discovered what I was missing. The first show that I really loved dancing in was All Shook Up, where I got to be fun and wild, but didn’t have to mess much with that “technique” stuff. From then on, I did a lot of dancing in shows, but didn’t have any formal training until I got to college where I decided to mold my education into including a rigorous dance schedule. My love for dance then transformed from being something that allowed me to be explosive and loose to a love for something that gave me great discipline, grace, and capability to share complex stories and represent struggles through movement. Now I love being able to dance because it gives me an emotional outlet and provides me with a deeper connection to the typically unnoticed stresses that I keep wrapped up tight within my body.

9. What’s the first musical or movie musical that you were all about growing up? What did you love about it?
My first musical that I was all about growing up was actually Gypsy. It was the first show that I was ever in. I was 8 years old and I played a newspaper boy. Although I certainly had absolutely no awareness of the complicated adult themes, I just really loved the stripper number, “You Gotta Get a Gimmick.” My mother told me she would walk in on me singing it. Still not fully sure what I could’ve possibly thought it meant, but maybe I just liked Electra’s light up costume! Isn’t that enough!

10. What’s your pop culture obsession right now?
My current pop culture obsession is definitely Stranger Things. I just completed season three and though I have been lightly fulfilled, the Duffer brothers left me hanging yet again and now I have to struggle through the next year until I see what happens! I’ve also been really into the ‘80s lately, particularly the music, neon lights, and funky style, so it has hit every single one of my buttons.

If you are in St. Louis area, get yourself over to The Muny to see Mason Reeves as Ren in ‘Footloose’, running July 18 through July 24.