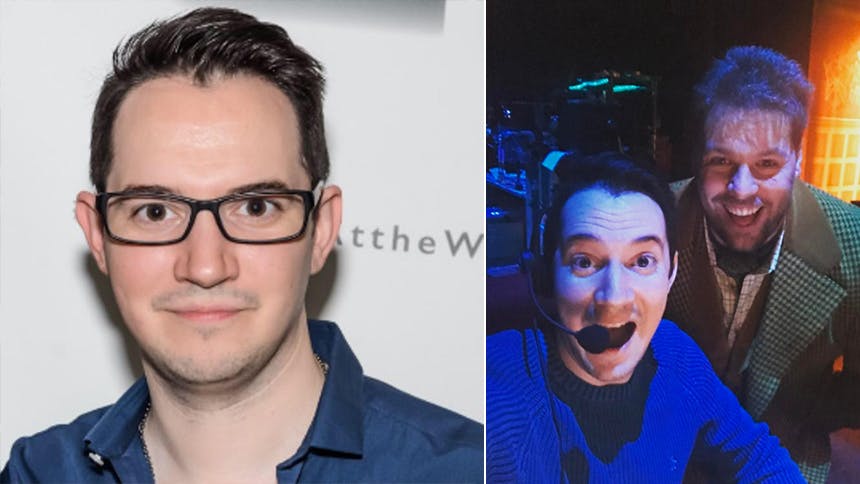 Production stage manager Matthew DiCarlo is the man making sure everything is running smoothly at Broadway's hilarious, new Tony-winning farce The Play That Goes Wrong

. Matt previously served as PSM for the Tony-winning revival of The Color Purple, Rock of Ages, and Honeymoon in Vegas. BroadwayBox caught up with Matthew to find out about what it's like to call this beast of a show, advice for aspiring PSMs, and a typical day at the theatre.


1. What do you consider your big break in the business? How did you find yourself on this path?
I found myself on the stage management path sort of by accident—and I’m so glad that I did! When I was a high school senior, I was the student director for our spring musical, Damn Yankees. After years of acting as a kid, I spent my years in high school realizing that what I really loved was being on the “other side of the proscenium.” I ended up doing a lot of directing at my local community theatre, too. When I was applying to colleges, I applied to a bunch of directing programs and a bunch of production/design programs. Through my reading and researching, I found some material about being a stage manager. I thought it was really interesting and decided to pursue it. Since graduating from Rutgers University in 2007, I have been very fortunate and I have had some really awesome opportunities come my way…I consider so many things my “big break.” If I had to pick one, it would be becoming the Production Stage Manager for Rock of Ages on Broadway. It was right after my 25th birthday, and that is pretty young to PSM a Broadway show. The creative team and our producers really believed in me and I had been with the show since its off-Broadway run. I think that my time as the PSM of that show opened a lot of doors for me. I’m forever grateful for those awesome (crazy!) years at the Bourbon Room.

2. What are three pieces of advice you’d give to someone who is interested in stage managing professionally?
Good question! First, meet people. Talk to stage managers and ask great questions. Put yourself out there and make good connections. Second, and I know this one sounds corny, be a light in the room. Make sure that wherever you are, you are being the best version of you. So much of stage managing is about people skills and the way we communicate and problem solve. Make sure that you are always being proactive, focused, even-keeled, and confident. Third, find a system that works for YOU. Like so many things, there is no one way to stage manage. Everyone has their own style. Find yours, make sure it works, and trust it.

3. How is The Play That Goes Wrong unique as a stage manager? What is the biggest challenge with this piece in particular?
The Play That Goes Wrong has been a different experience than the other productions I have worked on. The cast has been doing the show together over in London for years and they created the show together. The piece is so in their bodies and they know it backwards and forwards. I was the “new guy”, so I had to catch up quickly. I went over to London for a few weeks to work with the cast and learn the show, but we didn’t have a proper rehearsal process. The technical running of the Broadway production is also quite different here than it is in London. Along with my incredible colleague, Sharika Niles, we helped bridge the gap as the British company worked with our crew here in NYC to figure out how the show would operate here on Broadway. We are all having the best time. It’s a really nice thing to laugh out loud at work every single day! The biggest challenge? It is a really physical show for the cast and it is all about timing. While calling the show, there are several sequences where I often feel like a character—the incredibly specific timing of the cues are what get the laughs! If you have seen the show, I’m sure you already know exactly what I’m talking about. If you haven’t, you will once you see it!

4. What’s a typical day like from arriving at the theatre to places for The Play That Goes Wrong?
My day often starts long before I get to the theatre. As the Production Stage Manager, I’m available during the day for phone calls, emails and/or meetings as things come up. One or two days a week, we also do understudy rehearsals at the theatre in the afternoons before an evening performance. For our normal show call, we get there 90 minutes before the show. The cast of this show does a full company warm-up in the basement of the theatre while the crew starts the preset for the evening show onstage. First, we make sure everyone is signed in. I check in with the cast and share any news or announcements with them, while Sharika starts to check the preset and discuss anything that we need to go over with the crew. If we have an actor out of the show for any reason, we would also distribute an “in/out” which details who is out, what understudy is on, and gives any pertinent information. One hour before curtain time, we call “half-hour for the top of the pre-show,” since for The Play That Goes Wrong, some of the action starts before the scheduled curtain time. Then, at 45 minutes before the start of the show, we have a fight call onstage with several of the cast members who are not in the pre-show. 30 minutes before curtain time is the traditional “half-hour until the top of the show,” Every night, either Sharika or I call the show (cueing lighting, sound, scenery, and props movements), and the other one of us is on the deck (checking places, flash-lighting some moments in the dark, and making sure everyone is safe and where they need to be). After the show each night, we check in with the cast, then write up a performance report that gets sent out to our producers and creative team. That report details the running time of the show, the house count, gives any technical notes, and also a description of how the show went. We also score the audience for The Play That Goes Wrong on a scale of 1 to 10! Then, it’s time to get on that A train and head home!

Check out 'The Play That Goes Wrong' at Broadway's Lyceum Theatre.

The Play That Goes Wrong
Discount up to 33%
Newer
Broadway Bucket List: Get Ready to Gasp as Spamilton Star Nicole Vanessa Ortiz Sings Three of Her Dream Roles
Older
Nine Shakespeare Productions To See This Summer in New York City