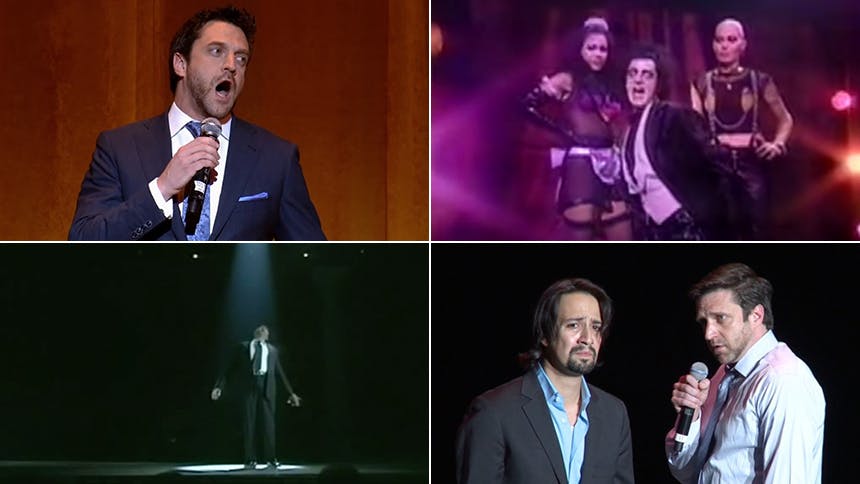 Drama Desk and Theatre World Award winner and four-time Tony Award nominee (let’s not even open that can of worms here…) Raúl Esparza is back singing Sondheim on the New York stage, and for a moment everything feels as it should. The Law & Order: SVU star leads the limited Encores! Off-Center production of Stephen Sondheim and John Weidman’s musical Road Show at New York City Center from July 24 to July 27.


Raúl has not been on Broadway since Leap of Faith in 2012, and theatre fans are hungry to hear that voice again. To prepare us for the full glory of it all, here are a dozen of our all-time favorite video performances by the one-and-only Raúl Esparza.


Raúl made his Broadway debut in 2000 as Riff Raff in the hit revival of The Rocky Horror Show, and it’s fair to say he put an indelible mark on the score with his crazy vocals (0:43-1:10). Now, the ONLY acceptable way to sing “Frankenstein Place” and “The Floor Show” are the way Raúl did in 2000.

“Being Alive” from Company


Let’s get this one out of the way up top. This Tony Awards night performance is everything. It’s legend. I’d say if we are looking at the history of solo performances by men at The Tony Awards, this very well might be number one. He gives it all vocally and emotionally. You can’t sing along and not do the Raúl inflections (please see his “mock me with praise” at 1:52).

“Franklin Shepard Inc” from Merrily We Roll Along


OK, now we enter dicey territory because some of these essential Raúl videos just happen to be boots, but how in the world could you not include this masterpiece? He is truly one of the foremost interpreters of Sondheim up there with Patti, Bernadette, Stritch & Cerveris. This is the perfect version of this song.

“Why” from Tick, Tick…BOOM!


This Tick, Tick…BOOM! moment was THE moment on the album (well, tied with Amy Spanger’s “Come to Your Senses”). Hearing it again now, brings you right back to the early aughts. Come through 4:14-4:50!


There’s no other way to cover Taboo and his incredible, Tony-nominated performance as Philip Sallon. This is from the final performance of the cult musical and you can see why it’s considered holy canon for Raúl fans.


We conclude the boot section of today’s class with this video from the infamous Actors Fund concert of Hair. That album is a treasure, and so is Raúl’s performance of the title song. Tell me you don’t feel it in your bones when he gets to 2:55.


Picture it: it’s 2004 and you can’t escape Wicked—it’s everywhere. So naturally, Seth Rudetsky and Raúl Esparza want to give us a male “Defying Gravity”, and, to this day, I still live for what happens at 2:37.


Leonard Cohen’s “Hallelujah” truly shows off everything that makes Raúl’s voice so special. It’s the perfect showcase for his talent.


Lin and Raúl as Anita and Maria is what MCC’s Miscast is all about, but what could prepare you for what Raúl does with “I Have a Love” beginning at 1:56?


This performance is from President Obama’s 2013 Latino Inaugural, and it feels important and should be seen. The whole song really takes flight when he begins singing in Spanish at 3:22.

“The Man That Got Away” from A Star Is Born


Raúl delivers a knockout version of this Judy Garland torch song. He is serving you everything you want and need from this moment—How about that Effie White arm 2:36-3:05?!

“The Flag Song” from Assassins


Another Sondheim. Watch the passion he brings to this cut song from Sondheim and Weidman’s Assassins. The ending is sick.