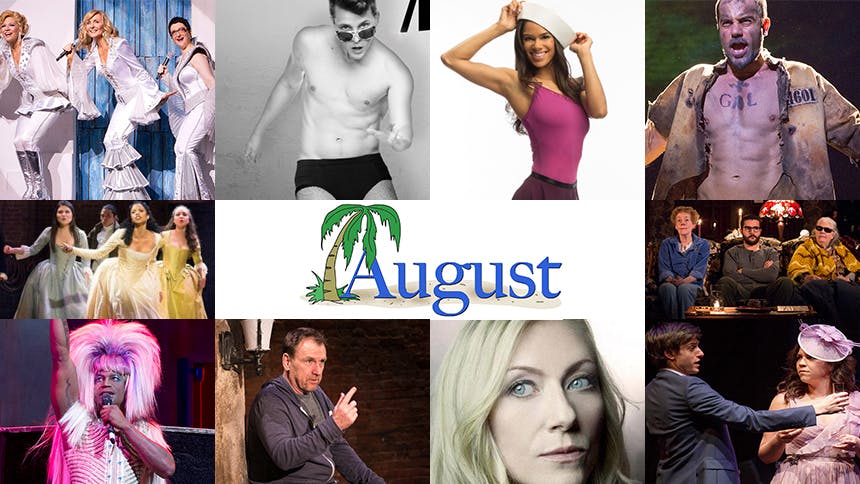 It's officially August; it's your last chance to enjoy the summer sun and some hot New York offerings. Below, BroadwayBox editor Josh Ferri shares his 10 picks of plays and musicals to see in New York City this month.

1. It wouldn’t be right not to have Mamma Mia! as the Show of the Month for August. The long-running Broadway hit ranks as the ultimate feel-good musical (and you know that dancing in the aisle to the mega-mix ranks as one of your B’way guilty pleasures too). You can't let the final performance on September 12 roll along without one last ABBA romp at the Broadhurst Theatre.


2. August is also your final month to see Ramin Karimloo as Jean Valjean, and that performance deserves to be seen by anyone who can so much as hum a Les Miserables tune. Seriously, you’ll never see or hear Les Miz like this again (because there's no revival cast recording), so bite the bullet, buy a $37 BroadwayBox ticket and just listen to that angel’s voice from the mezz.


3. This is more of a set an Outlook calendar reminder, but on August 25, Misty Copeland joins the Broadway company of On the Town, and that is FOR SURE worth a revisit.

4. If you have social media or you subscribe to The New York Times, Vogue, Vanity Fair, The New Yorker or Wall Street Journal, you know Hamilton; and if you can get a ticket to Lin-Manuel Miranda’s three-hour rap opera, now’s the moment to see it. You don't have to be a rap fan or a history buff to appreciate this blockbuster Broadway musical.


6. Want to feel like the ultimate New Yorker? Go downtown and see Colin Quinn talk all about growing up in the city and its rich history in a new one-man-play directed by none other than Jerry Seinfeld. Seriously—it just doesn’t get more New York than that. Based of Quinn’s book The Coloring Book, Colin Quinn The New York Story runs at the Cherry Lane Theatre through August 16 and then returns on October 20.

7. It’s that time again; time to head over to the Belasco Theatre to see Broadway’s latest Hedwig. The new headliner is stage and screen star Taye Diggs, and he’s giving one hell of a return-to-Broadway-performance.


8. You only have until August 16 to see Joshua Harmon’s must-see off-Broadway play Significant Other. If you have ever dated (esp in the iPhone generation), this is the show to see. You’ll laugh, you’ll cry, you’ll buy a mid-show cocktail and send a drunk text.


9. Heathers star Dave Thomas Brown is back off-Broadway as a straight Elvis impersonator who becomes a star in the drag world in MCC Theater’s fall offering The Legend of Georgia McBride. (It’s like Flaming Saddles, but without the annoying cash-only bar.) Check out the trailer below. Performances begin at the Lortel Theatre on August 20.


10. If you’re looking for an off-Broadway drama that’s serious and going to pack a punch, check out Informed Consent at the Duke on 42nd St. Based on a true story, the play stars theatrical treasure Tina Benko as a genetic anthropologist who unearths much more than the Native American tribe has given her access to study.