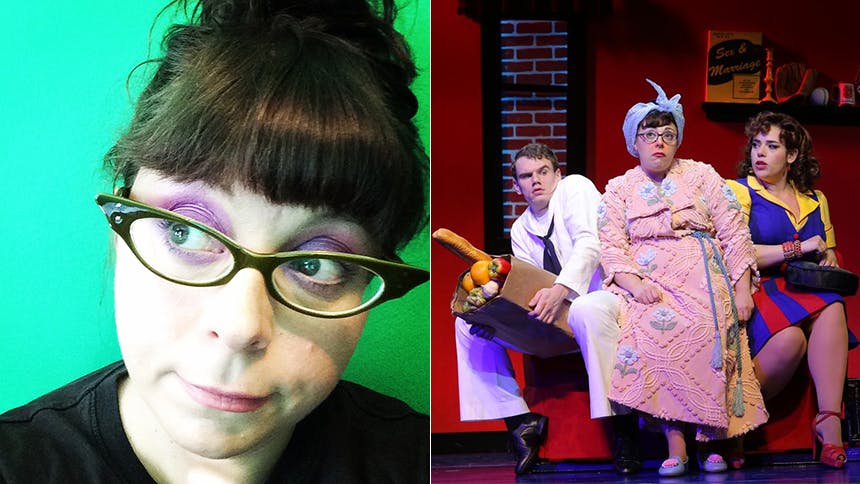 Allison Guinn gets tons of laughs as poor, sweet Lucy Schmeeler, the sickly, jock-blocking roommate to Alysha Umphress' Hildy, in the acclaimed revival On the Town.

Below, we get to know Guinn—who also cracked us up in the Tony-winning revival Hair—a bit better as she talks growing up in Appalachia, playing the autoharp and why Lucy Schmeeler needs more comfortable shoes.

2. If I could give Lucy one piece of advice it would be:
Bring more comfortable shoes (you never know where the day will take you), hold your head high and be proud of who you are, and maybe cover your mouth more when you sneeze.

4. Most cherished memory from my time in the HAIR tribe:
My favorite moments in Hair were spent with Josh Lamon, my best friend.


5. If I had to describe working on Inside Amy Schumer in a hashtag, it would be:
Having the immense pleasure of working with Amy Schumer and co. would be summed up in the hashtag #DontLaugh. It's incredibly fun to work there and improv is a big part of the process so, if someone comes up with something super ridiculous, but super hilarious while rolling, it's hard not to break.

6. Fictional character I relate to on a visceral level:
So many! I remember reading Frankie and Johnny in the Clair de Lune for the first time and weeping. I loved "Mary" from Mary and Max. I remember feeling like that little girl lots as a kid. "Tina" from Bob's Burgers because of her loveable awkwardness. I loved 'Benny" from Circle of Friends, "Muriel" from Muriel's Wedding, "Ramona" from the Beverly Cleary books, and I've always felt like a cross between Gonzo and Fozzie.

7. My New York City happy place is:
I have this strange love affair with Greenwich Village, but not what it is now, but what it used to be. I had a terrible job waiting tables on MacDougal from 8pm-4am when I just graduated, and I would walk past Cafe Reggio or Cafe Wha, and think that Joni Mitchell wrote "Tin Angel" about a place in this neighborhood, and long for the folk scene of the '50s and '60s knowing I was born too late. That's a magical place for me to think about all the legends that used to walk the streets there.

8. The best autoharp video on YouTube is:
Once again, SO MANY! I have to go with a tie of two from two of my favorite autoharp teachers:
1. The Wild and Wonderful Bryan Bowers! He is my autoharp spirit animal! This man plays from his heart and soul, and it is always a joy to watch him live and to learn from him: Bryan Bowers: "When I Go" by Dave Carter.

2. The Fire Fingered Karen Mueller! She has the most amazing technical ability! She's played with John Paul Jones of Led Zeppelin and has a cover of the Allman Brothers' "Little Martha" that I adore! I love to listen to her, and to watch her fingers fly! Karen Mueller Irish Autoharp Solo.


9. Performance that made me want to be an actor:
You're going to laugh, but the first performance that I ever saw that I thought, "How did she craft such a character that's so over the top and horrifying and hilarious all at the same time!!? Genius! I want to do that!" was Piper Laurie as Margaret White in Carrie. She was just so magnificent! It's over the top, but it HAD TO BE! I loved every minute of her performance in this because Margaret White was such a monster! I watch it over and over. If you have a chance to watch the special features on the DVD of Carrie, watch her bits in the featurette about the acting in Carrie and you'll see what I mean.

10.  One thing every one should know about Appalachia:
I am just in love with Appalachian female voices. Almeda Riddle, Elizabeth LaPrelle, Hedy West, and the great Hazel Dickens: So expressive, so lonely, so wonderful, so distinctly Appalachian. I'm proud to come from such a rich tradition. My Grandmother was my favorite Appalachian singer. I've created a concert of her favorite songs and stories called THE LEGACY OF DAISY DEAN playing at the LIC bar on August 24th at 9pm (no cover!). Come and experience the rich traditions of live Appalachian singing and storytelling!

Laugh along with Allison Guinn at 'On the Town', running at Broadway's Lyric Theatre.

On the Town
Best Priced Tickets
Newer
Want Free Broadway Tickets? Then You Want to Learn About the BroadwayBox Lottery
Older
Your Summer Plans Aren't Complete Without Seeing These 10 Plays & Musicals This August
Sign up for BroadwayBox Discount Alerts