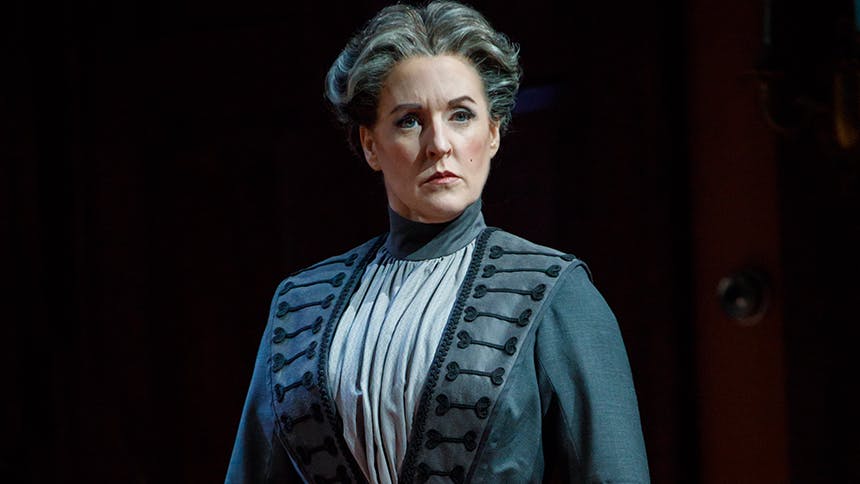 . The character actress is a New York mainstay, having memorably appeared in Hello, Dolly, Wonderful Town, Young Frankenstein, Into the Woods and more. BroadwayBox caught up with Linda to talk about her unintentionally comedic turn as Mrs. Pearce and the five incredible actresses she counts as her comedic influences.

I have to say, I never viewed Mrs. Pearce as a comedic character. So that she comes across at times as comedic was a complete surprise to me. I viewed her as stern and as the authority in the home—a mother in the home to Henry, as well. So when Catherine Zuber told me in the run, “You're so funny,” I went, “What?!?” I really was so surprised by that. I'm just over the moon that I get to play this part, and I'm so happy that Bart [Sher] took a chance on me, truthfully. It's just been a joy, and each night I try to really just find new things and listen and raise my game the best I can working with these incredible actors that are around me.


There are a bunch of ladies that came to mind, but my fab five begin first and foremost, of course, with Angela Lansbury in pretty much everything that she's ever done. My adoration of her began when I was a child with Bedknobs and Broomsticks. It was just like, “Who's that lady?” She's so amazing—she sings and she's an amazing actress. Then, of course, Mrs. Lovett in Sweeney Todd, which is my most favorite show of all time. I have never seen her on stage, but I saw her at the store Gracious Home. I was so nervous because I admire her so much; I just did a little bit of a stalkery moment around the store.


I don't know too much of her work, but her performance in A Trip to Bountiful just blew me away. I thought she was incredible in that film. I was just drawn into how she played that role. She has so much comedy in what she does. And there are very, very innocent and sweet moments that she brought into that character that I thought were just so beautiful. She had me spellbound. I would watch it all the time. I'm one of those people who will watch a show or a performance again and again and again and again if I like it.


Emma Thompson does all the things—she writes, she's an incredible actress, and she's also an activist. She's strong and outspoken. I loved her amazing writing of Sense and Sensibility, which is one of my favorite films. I just love all the things she's done. Her acting is just exquisite, I think. She’s so diverse, from Mrs. Lovett to all the Harry Potter movies.


Maggie is pretty much everything! (These are not in order of love because I love all five.) I love Maggie Smith. I even do a cross in My Fair Lady that I have named the Maggie Smith cross. When I first did it, I felt like I was channeling her. It's when Eliza first comes into the house, and then Higgins says, “I'll make a duchess out of this draggle-tailed guttersnipe. Take her away, Mrs. Pearce, and clean her.” And he's kind of chasing me, and so I'm walking, and I'm doing the Maggie Smith, which is when you walk in a direction but you're still looking over your shoulder. Maggie Smith does that a lot—where she is moving away, but she's looking back. One of the movies that I love Maggie Smith in is A Room with a View. She is so, so still, but has all the Maggie Smith disdain and irritation. It's just all through her eyes and her posture, and, of course, her tone. She's an amazing, amazing actress.


This one may seem out of left field, but that's probably why. She is so wacky. Waiting for Guffman was a big film for me. Her point of view of things is amazing. And, of course, her as Moira right now on Schitt's Creek. I love her mind. The line readings as Moira are so distinct. Who else would come up with those inflections the way she does? Her type of comedy is really just exceptional.


Hurry to Broadway's Vivian Beaumont Theater at Lincoln Center Theater before July 7 to see Linda Mugleston in 'My Fair Lady'.