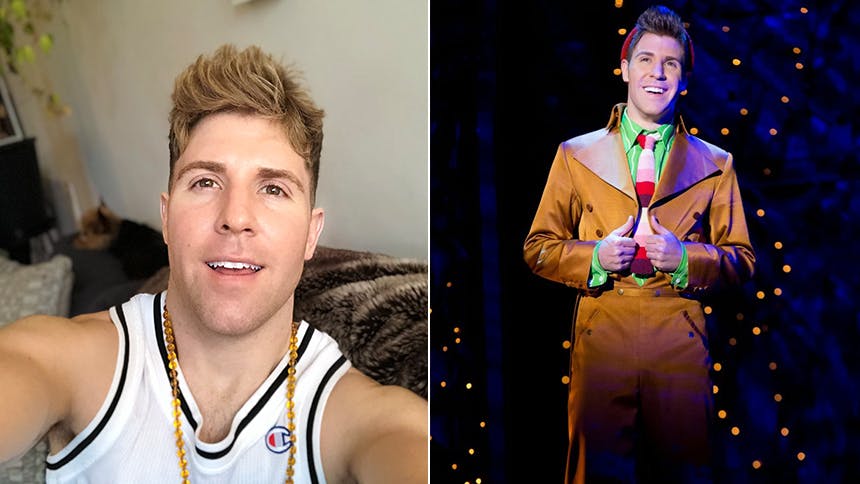 , a role he also toured around the country. He's previously appeared in Broadway's Xanadu, SpongeBob SquarePants, and the short-lived, cult musical Glory Days. A singer-songwriter, Jesse takes the stage at Feinstein's/54 Below on June 24 for a one-night-only concert featuring original music, songs off his debut EP Ginger Love, and new songs & covers that will appear on his upcoming album.


Scroll on as Jesse talks with BroadwayBox about living his dream as Boq, his musical influences, and the unusual way he booked the 9 to 5 tour.

1. How has Boq and Wicked changed in the years you’ve joined the show?
Not much has changed in the world of Wicked over the years. It’s a well-oiled machine and very well maintained. It is, however, ever changing as far as the actors are concerned and is so amazing to be able to perform with all the incredible talent that comes through the Wicked doors. Each new talent brings such an undeniable life and energy to their character and has definitely helped me grow in the role of Boq and personally as a performer each time.

2. What’s your favorite aspect of the Boq track?
My favorite part, CHEESE ALERT, is getting to play a dream role of mine. Ever since the show came out, in 2003, it has been a huge inspiration of mine to be a part of this show. Boq has always been the “heart” of the show and I definitely identify with the character personally.

3. What’s the best and worst part of touring a musical around the country?
The best part of touring is getting to see the country and then some. Exploring each city and finding all the great treasures it has to offer. The architecture, night life, people, culture, the landscape. It helps keep the road life fresh & exciting and helps expand understanding and knowledge about our country and the people who live in it.

The worst part is that sometimes you feel shut out from the world. Being away from loved ones and feeling left out with all the goings on in NYC and the rest of the world. Easy to get lost. When you come back you often have to start over and rebuild your relationship with the city and business.

4. If we were to listen to one track off Ginger Love as an introduction to you as an artist, which would you recommend and why?
It’s hard to choose because all of them represent my style and soul...but if I were to choose one,“Set Me On Fire” has the energy and collaboration aspect that I enjoy with writing and singing my music. It features Emmy Raver-Lampman & Emma Hunton and the band sounds so incredible. Also, it’s one of the first songs I ever wrote.


5. Which album has inspired you most as an artist? What do you love about it?
Again, another hard one. Amy Winehouse, Sam Cooke, Marc Broussard, Ray Lamomtagne, Stevie Wonder, Patty Griffin, and Bonnie Raitt (to name a few) are all artists that have inspired me throughout the years. Anything with heart & soul and that tells a story about our history and people of this earth. One album I cannot stop listening to and has the sound that I identify with most is Let Me Get By by Tedeschi Trucks Band. The combination of Susan Tedeschi’s voice and Derek Trucks guitar playing is other worldly.

6. What’s a SpongeBob memory you’ll cherish forever?
I mean, the best memory I have is going on for SpongeBob for the first time for sure! I was obsessed with the show growing up and SpongeBob was definitely a hero of mine. Going through every day as if it was “the best day ever!”.

7. What question do you get most about the short-lived musical Glory Days?
“What was it like closing a show on the same day it opened?” We definitely didn’t see that coming but it was the experience of a lifetime and my Broadway debut. Not to mention, being a part of Broadway history in a way and getting to record my first cast album was a highlight of my life so far—still to this day.

8. Tell us a memorable audition story.
Getting cast due to the mustache tattoo on my finger. It was for the 9 to 5 First National Tour, and it was down to three of us. Everyone brought incredible talent to the table and it was a hard decision, so they went through our special skills and asked about my “instant mustache”. That’s what got me the job I guess. A secret weapon of mine.

9. What’s your pop culture obsession right now?
I have two. Definitely GOT and any everything about behind the scenes or goings on of what the actors are up to—oh yeah... I’m also caught up in my recent obsession with true crime podcasts and private investigating—the True Crime Obsessed podcast especially and Serial. When I grow up I want to be a detective for sure!

10. What would you tell young actors who dream of one day appearing in a production of Wicked?
I tell any aspiring actor that (and this is very Whoopi in Sister Act II of me) if you go to bed and wake up every day dreaming to be an actor, then you are supposed to be an actor. Never give up and always work hard perfecting your craft. Take as many classes as you can; watch all the YouTube videos; find as many performing opportunities as you can to build experience; and keep a good attitude—no one wants to work with a Debbie Downer. Bring yourself, quirks and individuality into the room. It’s ok to be messy, it’s how we learn and we keep learning on and on. I am taught something new about myself and my craft every day. Your dreams will come true if you work hard for them and have an open mind and heart along the way.

Don’t miss Jesse JP Johnson onstage in Broadway’s ‘Wicked’ at the Gershwin Theatre or in concert at Feinstein’s/54 Below on June 24 (and use code JESSE35 for 35% off dining room seating).

54 Below
New
Best Priced Tickets
Newer
Exclusive! Watch Justin Matthew Sargent Perform “Framed” from the New Streaming Musical No One Called Ahead
Older
Go Behind the Scenes at the Opening Night of Off-Broadway's Life Sucks with Kimberly Chatterjee