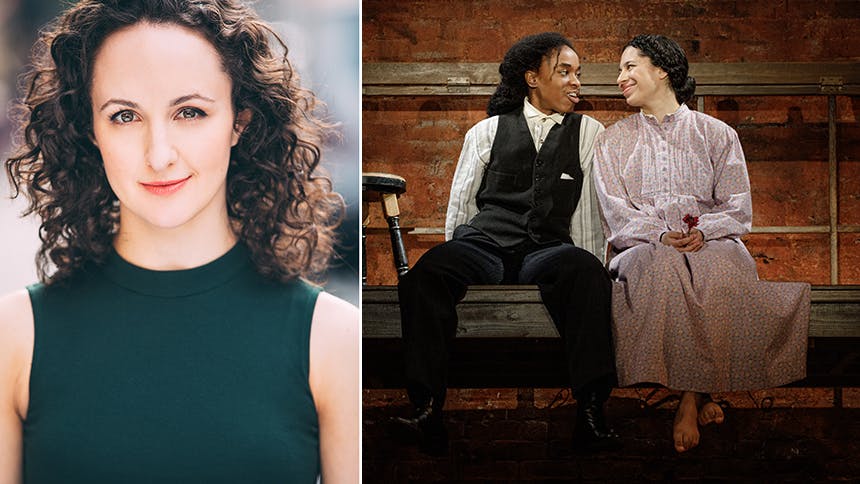 Kate Hamill is the brilliant playwright and star of the critically-acclaimed and uniquely modern stage adaptations of Sense & Sensibility, Pride & Prejudice, and Vanity Fair. This summer she returns to Primary Stages with her bold adaptation of the beloved classic Little Women

. In this production, the central character of Jo March is distinctly a member of the LGBT community. The show ends not with her going off to New York and finding her own husband, but with the death of Beth and Jo alone with her writing. BroadwayBox caught up with Kate Hamill (who hilariously co-stars in this production as the oldest March sister, Meg) to talk bringing queer representation to classic American literature and the relationship between Jo and Laurie.


How did you begin crafting this adaptation of Little Women, especially with regards to Jo March as a LGBTQ character?
I am really interested in creating new feminist classics—these very actively-radical, socially-progressive feminist classic pieces. Because even when they were female-centric to begin with, they are very often adapted by and through the male gaze or in a very conservative way. So, I'm very interested in always finding how they speak to our time, and I was really interested in Little Women because it's a seminal story.

By virtue of the title and by virtue of people's relationship with it, I knew that young people, children, and families would come see it, as well as adults. I didn't want to create a children's play, but what I did want to create is a play that I would have wanted to see when I was a child or a teenager, or that I want my 10 nieces and nephews to see. We know by virtue of studies, that LGBTQ teens and kids are five times more likely to commit suicide than their peers, that they're more likely to be depressed, rejected by their families, or suffer mental health issues.

Given that Jo March is—and has for a long time been—a kind of de facto gay icon for young women, I'm not going to write a story in 2016 (that's when I started this play) that has her give up her writing career to be in a heteronormative romantic relationship. I was like, “No, she's going to choose herself, and being true to herself!”

I was really interested in creating the stories of these four women and how they struggle in their gender roles. I want LGBTQ people, but especially kids and teens, to come and see a classic piece and go, “You know what, the world has always had people like me. I can be the center of an American classic. This country has always had people like me. There is a place for me, and I don't have to fit in some heteronormative world.” It's been really interesting and rewarding and, you know, some people are quite upset about it.


For me, as a gay man seeing this, I saw Jo and Laurie connecting here not romantically but as two queer people at a time in which they couldn’t be themselves. Is that fair? Was there also something you were trying to say in regards to Laurie?
I'm so open because I feel like sexuality, orientation, and gender roles do fall on such a spectrum. We tend to want to really make it very linear, but often it's not—especially when you don't have any role models in front of you, as Jo and Laurie don't. I do feel like they're soulmates in a way, but I do say in the script that neither of them is particularly comfortable within their assigned gender role. Every single one of the characters in this play—or at least the “little women”, the March girls—do struggle with fitting in their gender roles. And some of them are more successful than others. I was really, really interested in a world in which Laurie and Jo are people who connect on a certain level, but nowadays, I don't know what their relationship would be.

It's also interesting because there's significant dramaturgical evidence that Louisa May Alcott [the author of Little Women] herself was probably not straight. Where she fell on the spectrum of sexuality is totally a matter of debate, but she did say, “I feel like I have the soul of a man inside a women's body because I've never fallen in love with a man, but I have fallen in love with lots of pretty young girls.”

She always wanted to make Jo reject Laurie. She refused to marry off the character that she based on herself. But then, the series took off and it became crazy popular. And she came under huge pressure to marry off Jo to someone. Because, even back in the mid-nineteenth century, people were reading the signs on Jo was maybe not interested in men. So, it is my belief that Louisa May Alcott closeted her own main character in order to protect her own life.

So, in a way, this play, for me, is just correcting the historical record. But, for me, even what happens in the novel in terms of Jo's sexuality and eventual trajectory is kind of moot. Because for the play in 2019, I think it's way more important—again particularly for young people and for children and families—to come and see a traditional story and to have their minds opened a little bit. It’s a part of American history and American life now, and it's so important to embrace that and not make everything some heteronormative romance.

The final part that I wanted to hear about was the collaboration with the actress playing Jo, Kristolyn Lloyd. What were the conversations that you and Sarna Lapine had with Kristolyn about how to play this and how to convey your intention. Because, obviously, this is a very different Jo than Winona Ryder or Sutton Foster.
It was a very collaborative discussion because I'm very comfortable with an actor bringing their own interpretation to the part. It was very important to Kristolyn, as well, that Jo be an actor of color—that we're not pretending that Jo is a white woman, and none of us wanted that. We wanted this to be about a person of color who is struggling with their gender role and the constrictions of that role. In terms of where Jo is on the sexuality spectrum, I was very comfortable with where Kristolyn wanted to go with that. I don't want to speak for her, but she agreed very much that they're soulmates, but Jo can't decide if she wants to be Laurie or be with Laurie. When you're growing up, everyone's figuring out their sexuality. You're all figuring out what you want to be, and hearts get broken along the way. The difference between Jo and Laurie is also a question of privilege. Laurie is someone who has a lot of money and opportunities, and so, he can take advantage of that and also blend-in more. That came very much into play too and how that tears at their relationship, even as they love each other very much.

Newer
Check Out Performances From the 2019 Jimmy Awards Winners & See Which Former Winners & Finalists Have Ended Up On Broadway
Older
Introduce Yourself(ie): 10 Questions with The Secret Life of Bees Star Brett Gray
Sign up for BroadwayBox Discount Alerts