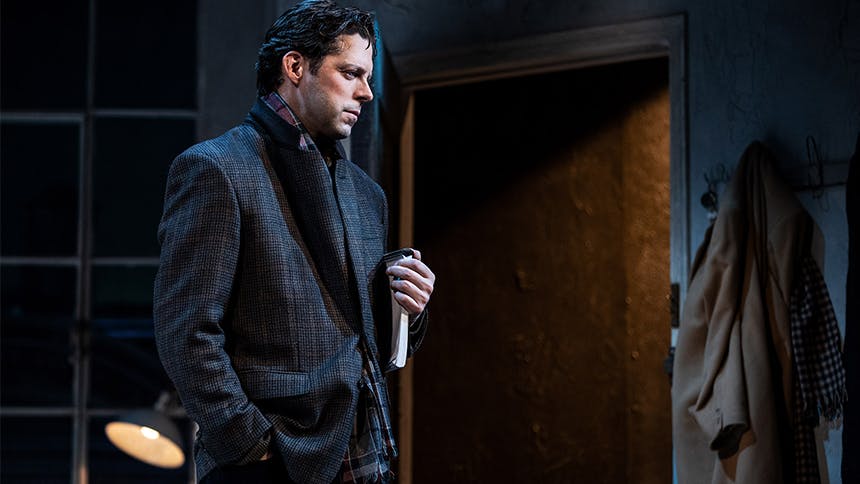 . The Tony-nominated drama is a bit of a departure for David, who last appeared on Broadway in the 2016 revival of the farce Noises Off (for which he earned a Tony nomination) and memorably co-starred in the comedy of manners The Importance of Being Earnest, which was preserved on film. BroadwayBox caught up with David to discuss crafting a different kind of Burton, the passion of Burn This, and challenging himself to do new kinds of work.


1. What’s the most interesting or important things director Michael Mayer and you talked about when crafting Burton for this production?
I think he can be played as a real stuffed shirt or a rich boob, but we decided we wanted to make him a real, viable option for Anna. Let's take him seriously, and let's make him a full, rich character that is a real option for her. So, at the end of the day, she's faced with a difficult choice. I tried to make him funny and a bit charming. I think one of the reasons I got the part was because I think I was able to bring a sense of humor to him. In another world, he's almost perfect for her. He's a great option, but maybe they don't have lots of passion except when they're talking about art. You have to find times to plant in there where the audience might see that there's a lack of passion or see that he's talking about himself a lot. I kiss her on the stove for a minute, and I say, "What's your schedule tomorrow?" Instead of just taking her to the bedroom.

2. Burn This is a play that people who love theatre love. They discovered it in college or regionally or saw the original, and they revere it. Now having lived in it for a while, what do you love about Burn This?
I really enjoy the relationships between the characters. The relationships are all just so striking and are really rich to me. Coming from Burton's point of view, I just enjoy the relationship I get to have with Keri and Brandon’s characters. Lanford Wilson talked about chosen family. It's family that we choose in New York City because we're not necessarily around our actual family, and it's something that's stuck with me. So, when I'm on with Keri and Brandon especially, I'm just diving into the business within the chosen family—and Robbie was part of that.

And the passion. There's themes about passion & love and passion & art and passion & friendships that I think people respond to. What do I want in life, and what am I compromising right now? When you're young, you think about what you want and what you're passionate about; then as we get older, we have to think about how we compromised and are we okay with those compromises. I think [Burn This] keeps checking back in with you as you get older.

3. What was the first play you were obsessed with or connected with on some deeper level?
I didn't get involved in theatre until I was in college, and then this whole world opened up to me that I hadn't really considered. I don't know that I would say I was obsessed with it, but one of the first classical plays I did in college was Arms and the Man by George Bernard Shaw. I was playing Sergius. He was a funny character, so it was hitting on all cylinders. The part of me that grew up watching Monty Python was like, "Oh, I get to be funny and make people laugh!" It felt like you could be an artist doing this and still have it be fun as all hell. It was all brand new to me, what theatre had to offer, and it was because of that play.

4. Burton struggles with feeling artistically fulfilled and stuck professionally. How have you overcome these feelings which are very common for professional artists?
Doing this play was one of those things for me. The last things I've done in New York City have been Shakespeare or high British comedy, like The Importance of Being Earnest or The Explorers Club or Noises Off. I was really hungry to be on stage with a small amount of people and just talk and be present. I wanted to try to take some of the work I've been doing on camera over the last few years and marry that into being back on stage. A lot of it is holding out for—in this case—a play that is different than what I've been doing and achieves what I wanted it to achieve. There are a lot of plays that I either turned down or turned auditions down because I've done that. Then there's the other side of things, where I have to make practical decisions. I have a family so I have to make practical decisions based on insurance and money and stuff like that. Actually, it's frustrating because you're trying to maintain an artistic world but you also have to maintain this practical world. I don't have the answer to that one yet, except to take the artistic opportunities when they fit and when you can.

5. You’ve worked with some amazing co-stars on screen and on stage. Is there one you feel you learned the most from in your time together?
There's a couple. There's a woman named Greta Lambert that you would never know because she makes her living down in Alabama. She was and is one of the best actors I will ever work with. When I was a grad student, she was one of the professionals down there. Then I went back down as a professional, and I played Hamlet and she played Gertrude. She was an early example of someone you point at and say, “That's it. That's the kind of acting I want to emulate.” I bring her up for that reason because it was early on.

Then I made my debut in Christopher Plummer's King Lear at Lincoln Center. I'd been doing a lot of Shakespeare regionally and I remember watching him. It was amazing to watch because he could bring an amazing form actor's naturalism with this really broad history of theatrical experience. He just had this whole package of making it as real as a movie actor is capable of making it but he had the tools technically and vocally to give it the size it needed theatrically. It was Shakespeare at its absolute best for me. That was just exciting and educational to see.

Since we’re talking Shakespeare here. Is there a Shakespeare role that you have not played yet in New York that would be on your bucket list to do here?
Most of the big roles are the ones I've played out and around the country. I've been in well over half of the plays—I played Hamlet three times, Romeo, and Prince Hal. I played Hamlet three times in three years. That was a pleasure because the lines were not an issue, and with each production you get to be bolder and make more distinct choices about what you want to do with the role. That was back in early 2000s, and I'm probably getting long in the tooth to do that again. It's not that I want to play Hamlet again, but it would be interesting to revisit it now that I'm 47 (because I was doing it when I was 30). I'm getting to an age where Macbeth would be interesting. Or I wish I had another chance to be Prince Hal. I got to do that when I was younger, and I loved it. I could be too old for that now, but you never know. I did Orlando in the Park when I was 40, so.

Don't miss David Furr in 'Burn This' at Broadway's Hudson Theatre through July 14.