All the Musical Numbers in the Moulin Rouge Film, Ranked 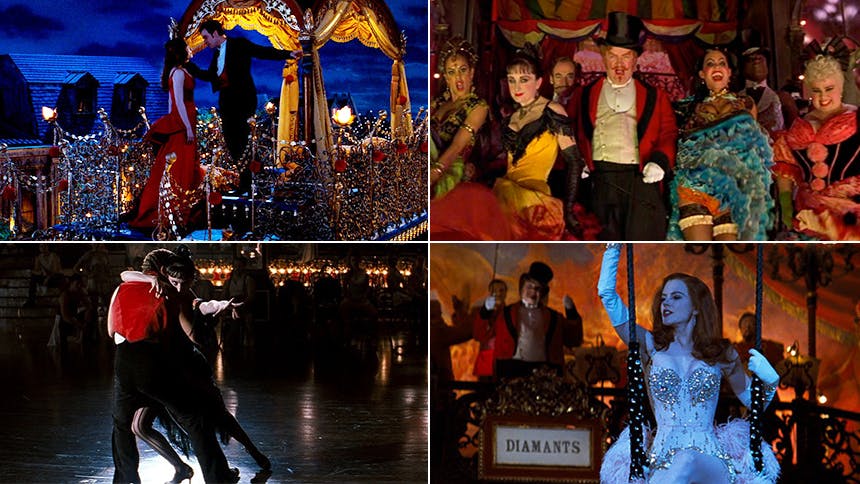 Baz Luhrmann’s Moulin Rouge made movie musicals cool again when it premiered in 2001. Now, 18 years later, it’s having a renaissance this summer in New York City. First, fans of the movie can enjoy it under the stars at the Rooftop Cinema Club showing on July 12. Enjoy the ultimate open-air film experience at Skylawn Rooftop Bar with deckchairs, cozy blankets, personal headphones, delicious munchies and craft cocktails.


Then on July 25, the long-awaited stage musical adaptation of Moulin Rouge opens on Broadway at the Hirschfeld Theatre.


To prepare us to re-enter the world of courtesans, poets, and Dukes, BroadwayBox gives a look back at all the musical numbers from the film Moulin Rouge.


Am I the only one that truly doesn’t remember this song?


Cheers to Queen Kylie, and this kicks things off a bit, but, let’s be honest, it barely qualifies as a musical number.


This serves as a prologue and its peek at the Parisian underbelly peaks the viewer’s interest in what’s to proceed.


Forgive this bootleg, but it had to be included. This number doesn’t work for me. The arrangement doesn’t hold up next to others in the film, and the moment feels even more icky in 2019.


This moment reminds me how much I wanted Nicole Kidman to win the Oscar that year. Oh, she lived for the drama.


There’s a lot going on here, but mainly it feels like when a cast performs a number you saw earlier again at the very end of the curtain call to send the audience out.


Who didn’t want a secret song written for them at this point?! This is a gorgeous song, but, as a musical number, it gets lost. It’s not as dramatic as the reprise or as romantic and exciting as “Elephant Love Medley”. We all love The Duke chasing the frog and Christian drawing Satine like one of his French girls, but overall, this is a rare moment that you can appreciate just as much (if not more) as an audio track.


This number is clever and frantic, and a little dizzying, but it works best as an unexpected moment in the film, not a standalone musical number.


Everyone loves a good backstage drama, and this is no exception. It’s the highlight of Jim Broadbent’s performance as Zidler, and it’s shot beautifully. Nicole Kidman kicks it into high gear when she enters. It serves dramatic tension within the film, but, out of context, it feels a bit deflated.


This is so operatic, with just a touch of cultural appropriation. The magnitude of the ensemble is staggering. The lighting is everything and helps to pull the entire thing off. It’s a haunting moment when it all comes together.


Yes, this is a pivotal moment when you are watching this film start to stop, but is anyone YouTubing this number off the bat?! Revisiting it, I’m shook by Ewan’s vocals. It’s so much more satisfying than the original “Come What May”; Nicole is ACTING (see Oscar comment above); and the drama with the gun and The Duke does add an element of excitement.


This arrangement is undeniably fabulous, and the choreography is fierce. The scope of the club scenes is so large, but, as far as musical numbers go, this number doesn’t offer what the later ones do. There’s a lot of plot here.


Props to this moment. It’s the perfect way to throw us headfirst into the deep end of Baz’s Moulin Rouge. It’s colorful, sexy, and dangerous—and a complete overload to the senses. Something has to be said for a strong start and a strong POV. The now iconic use of “Lady Marmalade” into the crowd of men singing “Smells Like Teen Spirit” is an eternal mood.


Have I truly ever loved Niki Kidman more than this moment? She earns her place beside the sirens Marilyn and Madonna in the canon of this song. It all begins with that stunning aerial moment on the swing and then bam, mama has arrived. The scary clowns behind her hint to the more sinister nature of the proceedings, but she remains luminous. It’s an incredible introduction to the leading lady.


This might be too personal a ranking, but this song and this moment gave me my young, gay teen life in suburbia. I was today days old when I realized this wasn’t written for the film, but is actually a cover of Randy Crawford’s jazz song from 1980. When the song crescendo’s around 1:45, it’s absolutely thrilling, and the imagery of her atop the elephant in a wide shot is everything. It’s the song I miss most in the Broadway musical adaptation.


I have searched high and low for a better version of “Your Song” and nothing touches this (in fairness, Gaga came close). Ewan McGregor delivers these lyrics like a monologue. This is what people are talking about in musicals where the character feels so much passion that the only way they could continue to express themselves is through song. It’s very this moment here.


There will be people who shout, “This should be #1!”, and they are right. It was a tough choice, because this scene is everything we all fell in love with about this film originally. The way it weaves 12 different pop songs together to create something that feels totally original is a testament to the genius of Moulin Rouge. And it’s so damn romantic! You can’t help but root for these two now. Baz Luhrmann should direct more musicals on film. Here, he is able to capture everything that thrills you about live musical performances and harness it on screen.


Come on! The arrangement, the choreography (shout-out to the one and only Caroline O’Connor), and the cuts between the company’s rehearsal and The Duke attacking Satine make this the pinnacle of the film. This musical number builds like no other in the movie. Nicole Kidman is giving her finest performance with barely a line of dialogue. It’s assuring to say, this remains one of the most incredible moments in the upcoming stage musical as well. They made sure that it was just as heart-pounding and devastating.