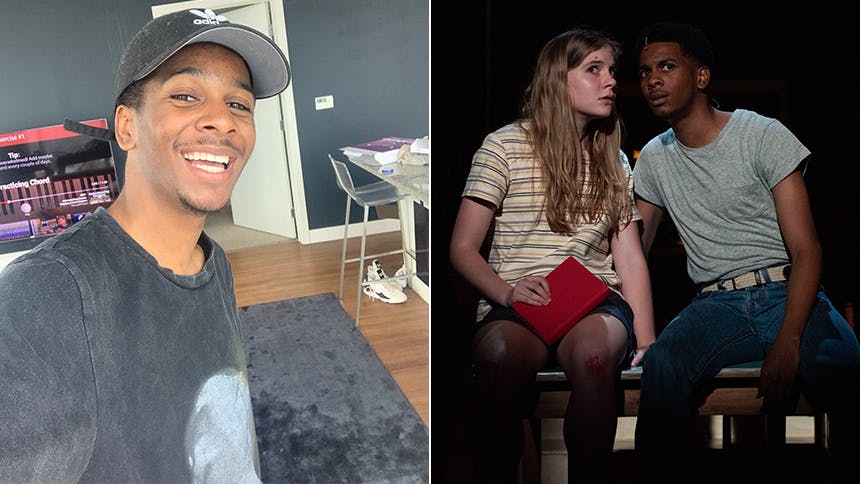 at off-Broadway's Atlantic Theater Company. He delivers a full-out star-is-born moment with his performance of the showstopper "Fifty-Five Fairlane", all about teenage Zachary's love of his new car. And while this is his breakout moment onstage, Brett is known to Netflix audiences for his role as Jamal on the Teen Choice Award-winning series On My Block and as a recording artist. Scroll on as BroadwayBox gets to know Brett a bit better as he talks about his history with The Secret Life of Bees, his early love of Wicked and Selena, his Netflix series, and his debut EP.


1. You participated in the reading and workshop of this musical. What was it about The Secret Life of Bees and Zachary that kept you involved and so passionate about the project?
Well, there's two reasons. One, because I was actually already connected to the story. My mom bought the DVD for the movie Secret Life of Bees home a couple of years ago, and one summer I finally got a PlayStation and I had one DVD and it was The Secret Life of Bees. So, I would just play it every time I wanted to go to sleep or to pass the time or just watch it. So, I was very familiar with it when I was asked to do the first reading. Then, also I feel like everybody who loves musical theatre wants to originate a role, so this was perfect. I get to originate something that I'm very familiar with anyway—I just had to do it.

2. What do you think happens to Zachary after the show? Does he move to New York for law?
I think Zachary says what he means. I think he moves to New York and he tried to practice law. I feel like Zachary might be one of those people that never even returned to this house after settling himself. I think he probably becomes a social justice warrior.

3. When we meet Zachary, his car is his prized possession. What is yours?
My apartment definitely. I love my apartment more than anything I've ever owned (because it is essentially housing everything I own). It's in my home city on the 21st floor of this building with all windows. I have a sneaker closet; I have a 65-inch TV; I have an air hockey table in the middle of it; I have a fireplace; I have a bedroom just for my self-tapes; I have three closets. I totally made it like a kingdom. I have artwork on the walls that was custom made by my friends from high school. But, I never am here—I'm always traveling and in either New York or LA filming. So, when I am here, it's just like coming home. I see all my family, and it's great.

4. What was the first musical you were obsessed with or that really spoke to you?
Wicked. I was obsessed with Wicked. I think it’s every musical theatre kid’s first obsession. I was bummed I could never be Elphaba. But a very close second is Pippin, actually. I loved the Diane Paulus production. It was incredible.

5. Who were your music idols growing up? Who did you admire and want to be like?
My first love music for sprouted from my love of Selena Quintanilla. Again, my mom came through. When I was younger, we had a VCR and my mom bought me one tape and it was the Selena story. I would watch it over and over and over. I knew all the songs; I loved all the outfits; everything about it was just like my favorite thing ever. So, Selena was my first entertainment idol. When I was younger, definitely Tevin Campbell. I feel like we both have that trumpety type voice. And then Bruno Mars. He's a huge influence for me. I don't think there's a Bruno Mars song I don't know by heart from start to finish.

6. You’ve had an incredible few years. What’s been your biggest pinch-me moment?
Wow. I think probably the moment when we got season two of my Netflix show, On My Block. I thought it was pinch-me when I got the role and then it was one upped by being on set every day. I was like, "Oh my God! This is the best thing of my life!" Then, afterwards, there was this storm of, "Will it hit? Will people like it? Will we get more seasons? Is it going to be everything we thought it would be?" Then seeing how well this show did, I was like, "Okay, my first series regular on a show just happens to be a hit show on Netflix, and pretty much a dream role. Okay, I can wake up now."

7. What makes you proud about On My Block and Jamal?
I haven't seen a character like Jamal in a long time. It's easy to try and diminish how that feels, because it's a teenage show. But I grew up watching The Fresh Prince of Bel Air and Martin and watching Eddie Murphy do all these crazy characters, and I always loved that. I think Jamal, in the context of the show, feels so fresh and completely different and what my generation needs. For me it feels like my Fresh Prince of Bel Air.

8. Jamal is 14 on the show. What were you like at 14.
Exactly like Jamal. I was just hyper and happy and nervous. I was like, "If there's a problem, how do I fix it?" I wanted to start my own businesses when I was a kid. Me and my friends used to try to make money and sell candy from the ice cream truck to the kids at the playground. We were crazy. [Jamal and i] have one difference: I was never afraid to tell people what I thought. I think I was a little bit more mature in that way.

9. Where’s the most random place you’ve been recognized by a fan?
One time, I was at 14th Street, and the MTA machine wouldn't take a card. It was only cash, and I didn't have cash, and I really had somewhere to go. And there was no attendant at the thing. I was like, "Okay, I'm just going to have to hop the turnstile." I just hopped over, and these two traffic officers stopped me. They were writing me a $50 fine. And I was like, "Guys, I literally will just go buy a card. The machine is not taking cards. You don't have to fine me.” And as I was saying this, one of the cops goes, "Hey are you the kid from that show?" I said, "Yeah." And she was like, "Oh my God! Will you take a picture for me? My daughter loves you." And I was like, "Only if I don't get this write up right now." We took the picture, and I actually made the train.

10. For people who will see you in this show and want to be introduced to your music, what’s the first song they should start with?
I think if they listened to “Last Song” off my EP Easy Daze, that's probably the best representation of me on a normal day. It's up-tempo; it's fun; it's happy; there’s a call and response type chorus. I'm usually like really chill and I'm always down for a party or something. And it also shows my range and my voice and how excited I can be. I think it just represents me the best if you’re listening to just one.


Hurry over to off-Broadway's Atlantic Theater Company before July 21 to see Brett Gray as Zachary in The Secret Life of Bees.

Newer
Kate Hamill Talks Jo March as a 'De Facto Gay Icon', Bringing Queer Visibility to Classic American Literature, & the LGBT History of Little Women and Its Author, Louisa May Alcott
Older
Steven Skybell and Jennifer Babiak Perform Their Moving "Do You Love Me" ("Libst Mikh, Sertse") From the Award-Winning Revival of Fiddler on the Roof in Yiddish
Sign up for BroadwayBox Discount Alerts