Meet the Incredible Young Stars of Me The People: The Trump America Musical 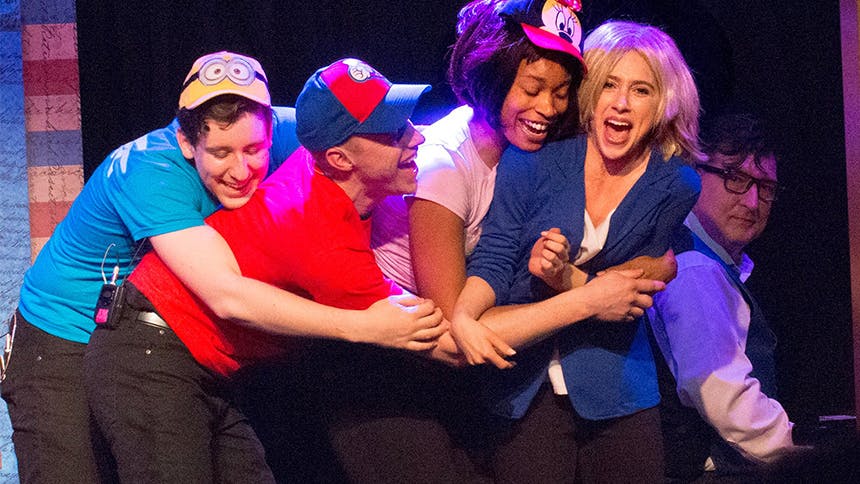 If your daily dose of joy comes from watching Seth Meyers, John Oliver, or Stephen Colbert comment on the Trump Administration and the GOP, then you have to check out the LOL musical revue Me The People: The Trump America Musical. The show stars four incredible young actors moving seamlessly through various roles from Ivanka Trump & Jared Kushner to Betsy DeVos and Kim Jong-un.


Scroll on to meet each of the wildly-talented stars.

1. First time I remember getting laughs:
At my bat mitzvah. At the party, I was descending this grand staircase to make a welcome speech to everyone—feeling super cute in my spaghetti strap dress, mind you —and next thing I know, I tumble down the stairs and land on all fours. I swear it was out of a bad tween movie. I realized I could pretend it never happened and be mortified until the end of time, or I could laugh at myself. So, when I welcomed everyone I did this whole little stand-up bit about my tumble and we all laughed. I really did become a woman that day.

2. The role I play that was hardest for me to find:
Ivanka. I struggled to find an interesting take on her. She is so calculated that I think she has somehow found a way to make it difficult for people to really mock her. Creepy, right? After lots of play in the rehearsal room and many hours absorbing Ivanka YouTube videos and articles, I eventually discovered what feels like a fun angle on her.

3. The most surprising thing about performing Me the People:
Some people respond to it in a more emotional way than I expected. We give the audience a few opportunities to speak to certain members of the administration, and there are always a handful of people who seem liberated by the opportunity to raise their voices against these characters.

4. Off-stage we bond/laugh most over:
Drinks at our favorite bar a few blocks from the theater. We're trying to establish ourselves as regulars there. It's going well.

5. If I were sending @RealDonaldTrump one tweet, I’d say:
@RealDonaldTrump log off Twitter and do your job—a job that expects you to protect and defend Americans of all backgrounds. Ya hear?

1. The movie or TV show that made me want to perform as a kid:
The Wild Thornberries. I would insist on doing this impression of Tim Curry’s Nigel Thornberry at parties and public gatherings; it’s really one of my first memories of wanting to get up and perform for people. And I was only 6 years old, so it wasn’t annoying yet.

2. First time I remember getting laughs:
I got cast as Zeke when I was 11 in a local youth theatre production of High School Musical. Zeke was a popular athlete by day and a secretive baker by night. I have never been either of those (especially an athlete, yikes). There is this scene where Zeke is trying to woo Sharpay with his baking skills. She immediately rejects him, and he shouts out “I could even make you a nice Tiramisu,” or something like that. 12-year-old me completely mispronounced the word, putting the emphasis on “tir-AH-misu,” and the audience lost it. In reality, they probably just felt bad for the really chubby kid with strangely over-spiked hair who couldn’t pronounce the word tiramisu.

3. The role I play that was hardest for me to find:
Richard Nixon. With a few of the characters like Paul Ryan, Jared Kushner, and even Tim Kaine, they don’t reveal the eccentricities of their personalities in public, so it actually felt quite open and free to find those people within myself. However, Richard Nixon is a notoriously distinct public figure; comedians have established entire careers imitating/impersonating him. But our writer, Nancy Holson, really did most of the work in the way she brilliantly satirized the song, and it was then up to me to make some specific choices with mannerisms and physicality.

4. The movie I love so much I know every word:
Blue Jasmine. Cate Blanchett is one of my favorite actors, and her performance in that film is something I admire and refer to often. I have multiple monologues from that movie memorized, I’m still convinced I’ll need them someday.

1. First time I remember getting laughs:
In an acting class at age 11. I totally drop character, it was the best feeling. I've been addicted ever since.

2. Off-stage we bond/laugh most over:
Melania.

3. The role I play that was hardest for me to find and why:
It was cut but Ben Carson was tough to play because he's not a strong character in real life.

4. The movie I love so much I know every single word:
Sister Act.

5. If I were sending @RealDonaldTrump one tweet, I’d say:
Other people matter.

1.    The movie or TV show that made me want to perform as a kid:
I think it was The Wizard of Oz. Maybe The Sound of Music. I always liked pretending to be other people, and I liked the idea of being part of a group of actors—be it Dorothy’s companions or the family von Trapp. I used to act out scenes from movies in the garage and make my poor parents watch them.

2. The moment in the show that I broke most during in rehearsal:
There’s a song in which a couple of generals try to figure out “How Do You Solve a Problem like Korea?” In rehearsal, we tried to find ways to differentiate the generals from each other and make them humorous, so we put on all of these weird voices and physicalities, some of which were extremely silly. I think I brought the rehearsal to a halt multiple times because I couldn’t hold it together.

3. The role I play that was hardest for me to find:
Probably Freud. He’s tough because he was obviously a real person, but he’s also become a caricature.Finding where the humor lives on that spectrum was a journey.

There aren’t any videos of Freud, and the one recording of him speaking English is very poor quality. I actually did a lot of research on his life and writing to try to understand what he might have thought about President Trump. Then it was a matter of taking that specificity and amplifying it so it’s funny.

4.  The most surprising thing about performing Me the People:
I think it’s the daily realization that we live in a world in which these things are actually happening. I still find it hard to believe.

5. I were sending @RealDonaldTrump one tweet, I’d say:
@RealDonaldTrump If everybody in the world declares you the biggest, strongest, manliest winner they’ve ever seen, will you please go away?

Don't miss seeing this quartet of rising stars in Me the People at off-Broadway's The Triad.