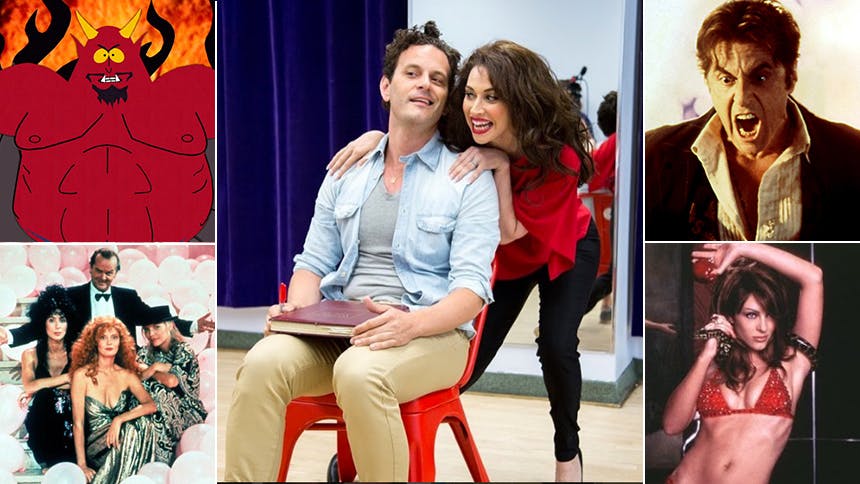 After winning Best Actress for last year’s festival production of A Scythe of Time, Olivier Award winner Lesli Margherita is back at New York Musical Festival in one of NYMF's hottest musical offerings, Matthew McConaughey Vs. The Devil: An American Myth—a Faustian comedy that tries to explain how Matthew McConaughey went from romcom-stoner to Oscar-winning A-list star. Lesli stars as Mephistopheles (one of the seven chief devils best known as the tempter Faust) opposite Wayne Wilcox as Matthew, Max Crumm as Woody Harrelson, and Jennifer Blood as Mathew’s faithful agent, Penny.

Queen Lesli Margherita was fierce as can be at NYMF's press event! get your tickets while you can! Www.nymf.org #fierce #PRESSDAY #nymf


Scroll on as Lesli shares with BroadwayBox her five favorite pop culture performances of the Devil.

The Devil in South Park: Bigger, Longer and Uncut


Look…he sings a “Part of Your World" parody. How could I not love a gay (out and proud) Satan who loves show tunes?? This was a no brainer. PS—Trey Parker’s voice is seriously underrated.


“The Barbra Streisand of Evil”. Meph is so much like her. The attitude, the wit, the absolute disregard for the style challenged. I’d love a musical version of this! (Only if Im cast, otherwise go to hell.)


Do I need to explain this? Ok—she isn't TECHNICALLY the devil, but…come on. This performance has unparalleled bitchiness. I worship her.

Jack Nicholson in The Witches of Eastwick


Who ELSE would play the Devil?? I love this movie, and I actually love this musical (look it up)—I’d loooove to do it someday. Jack Nicholson isn't even trying-—a must for the devil. This movie is a MUST SEE. Don't speak to me until you have.

Al Pacino in The Devil’s Advocate


I love Al Pacino…and this is the Pacino-ist he gets. The screaming. I love it all. He literally gave no f’s about going over the top. HE IS THE DEVIL. The devil HAS to be over the top. Amaze.

Don't miss Lesli Margherita in 'Matthew McConaughey Vs. The Devil: An American Myth' at The Acorn Theatre at Theatre Row July 10, 14, 15 and 16.