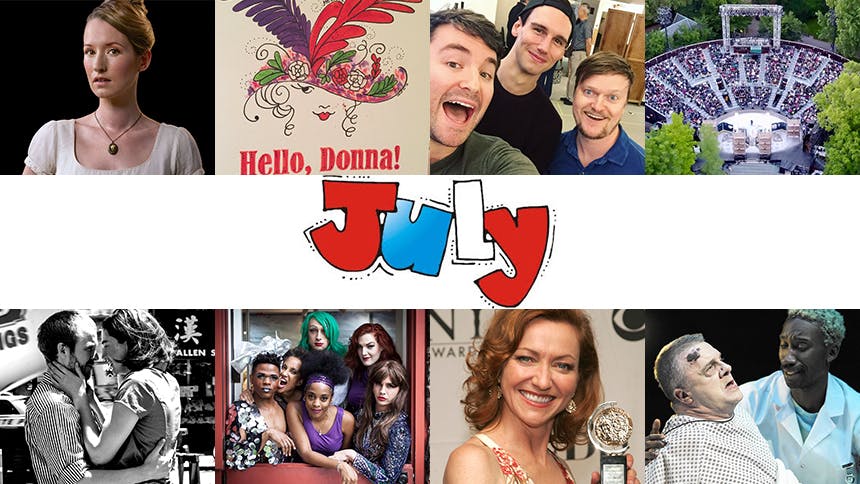 1. The Tony-winning musical Natasha, Pierre & The Great Comet of 1812

beginning July 25. Julie White is one of the most brilliant and talented actresses working on stage, so her in anything makes it an event (as anyone who saw her replace in Vanya and Sonia and Masha and Spike can attest)—but her doing that glove monologue in Doll’s House is worth the price of admission.

, starring stage favorite Steven Pasquale as John Wilkes Booth and Tony winner Victoria Clark as Sara Jane Moore. It’s going to be one of the shows everyone is talking about this month so get your ticket now. Running July 12-15 at New York City Center.

4. Another hot ticket this summer is Shakespeare in the Park’s production of A Midsummer Night’s Dream

starring Annaleigh Ashford, Danny Burstein, Kristine Nielsen, and Phylicia Rashad. One of the Bard’s most accessible comedies comes to life in The Park with an A-list B’way cast—it doesn’t get much better than that.

5. There is zero excuse for missing Donna Murphy as Dolly Levi in Hello, Dolly!

. Tuesday nights at the Shubert have become a party all their own with a two-time Tony Award winner giving a performance fans will discuss for years and years to come. She opts up every opportunity she can; her comedy is divine; her small moments are genius and heartbreaking; and she infuses the evening’s proceedings with a joy that just can’t be described—you have to experience Donna’s Dolly IRL.

7. Another interesting show that caught the eye is a Brooklyn production of Priscilla Queen of the Desert

reimagined for Trump’s America—which means they moved the action from Australia to Arizona and the issues of transgender rights, homophobia, and gay parenting take place in Middle America. The production is FREE and outdoors at the Old Stone House & Washington Park in Park Slope, Brooklyn every Thursday through Saturday in July.


9. Though whispers of a Broadway transfer loom, you still don’t want to risk missing your chance to see The National Theatre’s revival of Angels in America

starring Nathan Lane, Andrew Garfield, and Russell Tovey. Visit a movie theater near you on July 20 to see Part One: Millennium Approaches, then return on July 27 for Part Two: Perestroika.


10. Nancy Opel stars as a gutsy, recently widowed 50-something woman who rejoins the dating scene in the new off-Broadway musical Curvy Widow

. Seems like the perfect show to take mom to for a few hours of laughs—and Nancy Opel always brings it at 100% vocally, so you know she’s going to deliver.