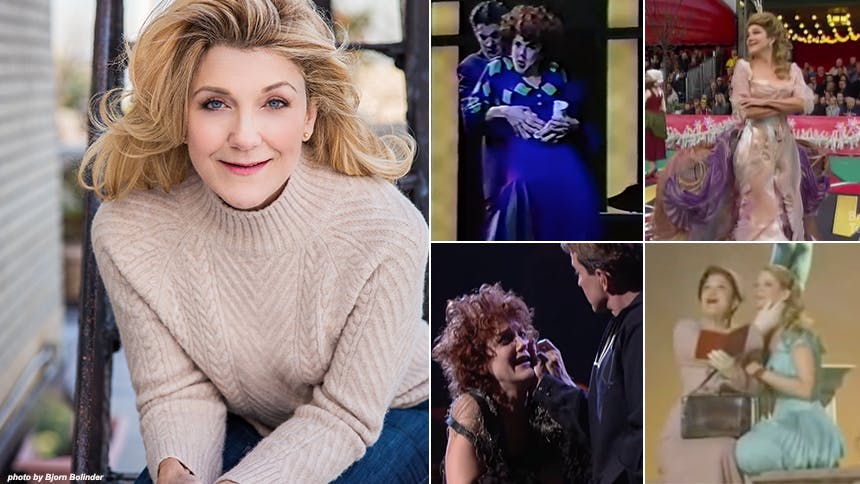 After starring this spring in the Toronto premiere of the new Broadway-aimed musical Sousatzka, Tony Award winner Victoria Clark is back in New York co-starring as Sara Jane Moore (the woman who attempted to assassinate President Gerald Ford) in Encores! Off-Center production of Stephen Sondheim and John Weidman's musical Assassins


BroadwayBox caught up with the four-time Tony nominee as she looks back and shares the stories behind six of her most beloved YouTube videos.

“Statues and Stories”, The Light in the Piazza at the Tony Awards, 2005


It was Tony Sunday and we had already done a matinee. Right before that segment started, a crew member at Radio City handed me this huge microphone and said, “Your mic is out.” I kind of froze because I already had a new monologue that Craig Lucas had written just for the ceremony—it was nothing I said during the actual show. Kelli O’Hara saw me go white from across the stage and she jumped out from behind the set and said, “Vicki, pull it together. You can do this.” She was my cheerleader giving me support. It was one of my favorite memories ever because after that, nothing will scare me ever again. It was a nice little rite of passage.


William Ivey Long was still trying to figure out the look of the Fairy Godmother and Paul Huntley said, “I think the wig will look something like this.” So, the top of my hair is my own hair and the bottom is something Paul Huntley found and styled. It was sort of “the mermaid phase” of the costume. William won the Tony that year but he never really finished my costume. He loved working on it and I loved collaborating with him. It was so much fun. I’ve done the parade so many times but this was my favorite.


It was terrifying—absolutely terrifying. Eric Schaeffer (whom I adore!) would not let me move at all during “Losing My Mind”. He said, “I want you to stand perfectly still. I will give you one gesture: you can look to the right and look to the left. You can decide when you do that, but don’t move your hands, your arms or your feet.” And I’m a very busy little actress—I’m a shuffler and my style of comedy can get rather phonetic—so it’s very hard for me to be still. Once I got comfortable with that it made everything so much better.

“Coffee Break”, How to Succeed in Business Without Really Trying, 1995


“Coffee Break” was really tricky Wayne Cilento choreography, and I had just basically given birth. I was literally living on three hours of sleep. My son was about six months old when we took him to the Kennedy Center to work on the show out of town. It was a crazy time. It was such a great group. I used to say every moment in the show was already taken, especially in “Coffee Break”. I had to stick my elbows out and say, “Give me some room boys!” (Because there was no more room for comedy.) It was really, really fun but I wasn’t operating on a lot of sleep.

“No Place Like London”, Sweeney Todd Concert with NY Philharmonic, 2000


This was another terrifying thing. You know what I really hear when I listen to that? As the beggar woman, you have to pull your pitches out of thin air. I was wandering through the cello section, and the notes I would get my pitch from came from the piccolo, and I was nowhere near the instrument. It’s one thing if you’re working through a mix. It was terrifying but amazing. Watching these videos, I can track my voice. I’ve gone through so many voice teachers and so many styles of singing, and I can really hear how my voice has changed—I used to be this big belter and now I don’t really belt anymore. It’s fun to hear and see the evolution of my career and how many things I’ve tried, how my versatility has saved me, and how lucky I’ve been.


Again, also terrifying—one of those one nighters where you just get up there and hope for the best. This was not a song that I knew before but it was so much fun. I could see Steve from where I was standing on stage, and I could see him smiling—that’s what made me happiest. It’s a great song. I remember thinking there’s something so sweet about that character and how she gives herself a pep talk during that song and she rallies. I thought it was so human. And how wonderful that so many of these videos have been Sondheim, very appropriate for Assassins.