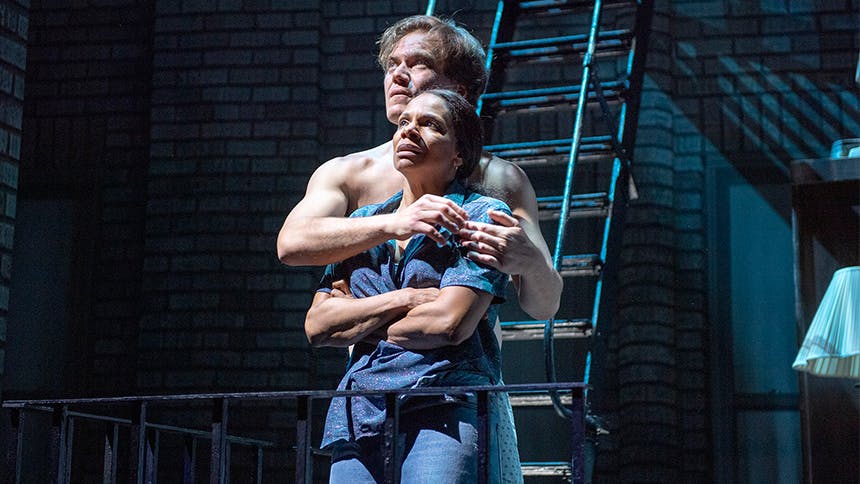 at Broadway’s Broadhurst Theatre through August 25.


There’s an amazing scene toward the end of Act I of the revival where Michael Shannon’s Johnny calls into a radio station. First, he gets a little heckle from the disc jockey about the pair’s famous name, and then he goes on to explain their unique relationship and requests “the most beautiful music ever written”. Scroll on as BroadwayBox unpacks both of those moments.

The Story of Frankie and Johnny


Frankie and Johnny is an American murder ballad based on the real-life 1899 shooting of 17-year-old Allen (Albert) Britt by his older girlfriend Frankie Baker in St. Louis. She shot Britt when she discovered him with a prostitute but pled self-defense at her trial and was declared not guilty. Soon after St. Louis songwriter Bill Dooley created a song “Frankie Killed Allen” weeks after the murder, and then in 1912 Frank and Bert Leighton released their version titled “Frankie and Johnny” (because it apparently flowed better than Allen or Albert). Since then, over 250 versions of “Frankie and Johnny” have been recorded by icons like Johnny Cash, Sam Cooke, Stevie Wonder, Van Morrison, Sammy Davis Jr., and Leana Horne. The tragic love story was adapted for film several times.


Toward the end of the first act of Frankie and Johnny, Johnny delivers an impassioned monologue about his and Frankie’s unlucky love story and requests to hear the most beautiful song ever written. The DJ goes on to play Claude Debussy’s “Clair de Lune”, a piano depiction of the 1869 poem of the same name by Paul Verlaine. The monologue, the poem, and the song are below.

Johnny: Do you take requests, Marlon? Then make an exception! There’s a man and a woman. Not young, not old. No great beauties, either one. They meet where they work: a restaurant and it’s not the Ritz. She’s a waitress. He’s a cook. They meet but they don’t connect. “I got two medium burgers working” and “Pick up, side of fries” is pretty much the extent of it. But she’s noticed him, he can feel it. And he’s noticed her. Right off. They both knew tonight was going to happen. So why did it take him six weeks for him to ask her if she wanted to see a movie that neither one of them could tell you the name of right now? Why did they eat ice cream sundaes before she asked him if he wanted to come up since they were in the neighborhood? And then they were making love and for maybe an hour they forgot the ten million things that made them think “I don’t love this person. I don’t even like them” and instead all they knew was that they were together and it was perfect and they were perfect and that’s all there was to know about it and as they lay there, they both began the million reasons not to love one another like a familiar rosary. Only this time he stopped himself. Maybe it was the music you were playing. They both heard it. Only now they’re both beginning to forget they did. So would you play something for Frankie and Johnny on the eve of something that ought to last, not self-destruct. I guess I want you to play the most beautiful music ever written and dedicate it to us.


The Poem
Your soul is a chosen landscape
Where charming masquerades and dancers are promenading,
Playing the lute and dancing, and almost
Sad beneath their fantastic disguises.

While singing in a minor key
Of victorious love, and the pleasant life
They seem not to believe in their own happiness
And their song blends with the moonlight,

With the sad and beautiful moonlight,
Which sets the birds in the trees dreaming,
And makes the fountains sob with ecstasy,
The tall slim water streams among the marble statues.

Experience the story of 'Frankie and Johnny' live onstage at Broadway’s Broadhurst Theatre through August 25.