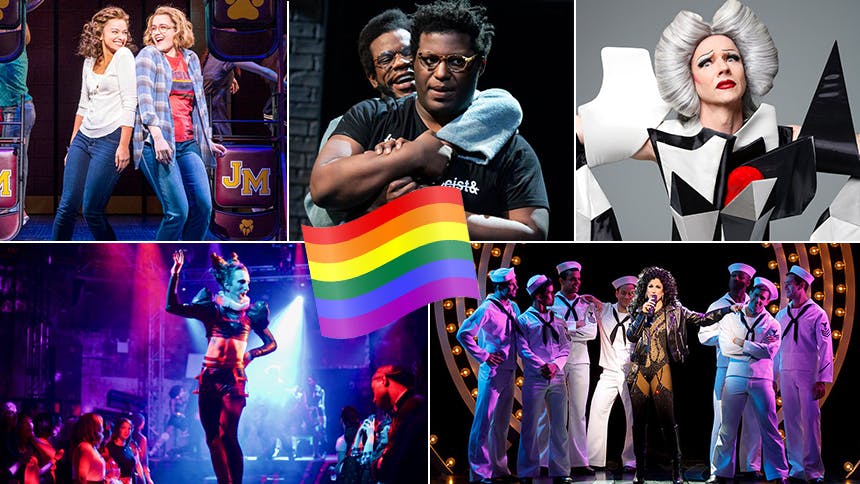 LGBTQ people the world over are converging on New York this weekend for World Pride 2019. And while many probably have their whole weekend planned to the minute, may we suggest finding time to take in one of these five essential LGBTQ musicals and plays running right now.


Michael R. Jackson’s musical A Strange Loop explores the gay black experience. It looks at family, religion, masculinity, the fetishization of the African American body, and the insidious nature of the white gay hierarchy. It’s incredibly structured and the music will have you living. Also, the central performance by Larry Owens is something that just has to be seen.


The award-winning Best Musical ends its run on Broadway in August before a starry Netflix film. Earn your gay street cred by seeing the original Broadway show before the Meryl movie— can properly discuss Beth Leavel’s belt IRL. Additionally, The Prom is the gayest musical on Broadway right now, telling the story of teenage lesbian Emma, her closeted girlfriend, and the New York liberals who arrive in her small Indiana town to save the day.

The Origin of Love


John Cameron Mitchell and Stephen Trask reunite this weekend at Town Hall to perform the music from their groundbreaking, Tony-winning musical Hedwig and the Angry Inch. Who knows how many chances we have to see JCM perform his Hedwig in NYC?! You must grab at every opportunity. Also, those fans don’t play around, so it’s going to be a PARTY.

Oscar at the Crown


This super fun, immersive and wildly unique show is set in our fascist future where only reality TV, sequins, and the complete works of Oscar Wilde have survived. Whether you can quote Oscar Wilde or the Real Housewives, this is the nightclub musical for you. It’s also the only show on the list in Brooklyn, so if you're borough-hopping this Pride, check it out.


It’s Cher, bitches! It’s also Stephanie J. Block singing for her life, Jarrod Spector shirtless and adorable, hundreds of Bob Mackie costume pieces, the music of Cher, and the hottest ensemble of male dancers possibly ever put together in one show. This is a Pride moment.

If you want a camp moment with a lot of D, check out the very naked off-Broadway musical comedy Camp Morning Wood

OSCAR at The Crown
New
Best Priced Tickets
Newer
Check Out These Stunning 1776 Character Portraits from The Muny
Older
Friday Playlist: The Broadway Musicals of the 1980s
Sign up for BroadwayBox Discount Alerts