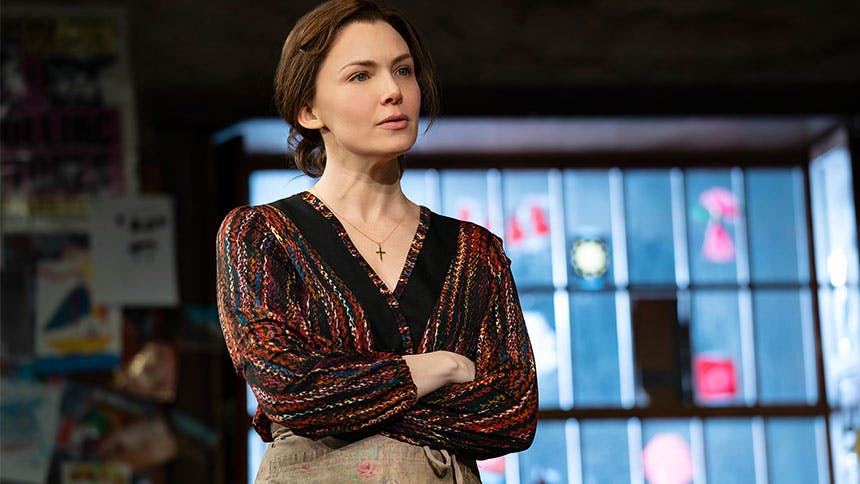 Holley Fain delivers a funny, heartbreaking, and all together captivating performance as Caitlin Carney in Jez Butterworth's Tony Award-winning Best Play The Ferryman. Holly leads the show's acclaimed second cast, which also includes Tony nominee Brian d'Arcy James, Emily Bergl, Blair Brown, and Tony winner Shuler Hensley. You only have until July 7 to see this magnificent company in action, so hurry to the Jacobs Theatre.


BroadwayBox recently caught up with Holly (whose previous Broadway credits include Roundabout's Harvey and Present Laughter, and who co-starred on TV's Gossip Girl, The Astronaut Wives Club, and Grey's Anatomy) to talk about her striking performance as Caitlin in The Ferryman.

1. When you were first cast, where did you begin crafting your Caitlin? How did you prepare for the epic journey she goes on throughout this piece?
Because this is such an ensemble piece, I knew that most of the magical, intangible “stuff” would come in rehearsal with the other actors. The cast is such an incredibly generous group of actors, across the board, so that sense of family and history really showed up pretty effortlessly once we were all in the room with (the brilliant!!!) Tim Hoare. As far as what I did on my own, it was important to me that I had a better knowledge of The Troubles. So lots of reading, lots of documentary watching.

2. How do you maintain your stamina in this role? By the end of the play, Caitlin hasn’t slept in days, and yet you as an actor have so much to do in Act III. And how do you take this emotional journey twice on two-show days?
Ya know what? I am not completely sure how I do it, to be honest. I think the fact that the material is so great, so huge is helpful for my stamina, in a way. The knowledge of how important this story is and how special this experience is for both the cast AND the audience, that provides a real source of energy for me. It’s also helpful to have co-workers like Brian d’Arcy James, and Ethan Dubin, and Emily Bergl, and Shuler Hensley, and Fred Applegate. I never feel alone on this huge, huge, huge journey. We really support each other. And then of course, there’s just all the boring stuff: take naps, drink water, pick and choose where you expel your energy when you’re not at the theatre. It’s resulted in my being a bit of a hermit during this run but hey, it’s worth it.

3. What do you think happens to Caitlin next? Where do you think she goes from there?
I’m not sure. But I don’t think it’s good and I worry for the whole Carney family, honestly. If I think about it too much, it hurts.

4. What did you enjoy most about working on the Grey’s Anatomy set? And what do fans of that iconic series want to talk about with you most when they see you out and about?
I mean, being a part of a Shonda Rhimes show was an absolute dream. She has done so much for representation in television. To be even a little teeny blip in that huge Grey’s Anatomy universe that means so much to so many people is an honor. People usually want to know about McSteamy (Eric Dane), and I’m always happy to share that working with him (and Chyler Leigh, and Sara Ramirez, and Ellen Pompeo, and Jessica Capshaw, and Sandra Oh, and Kevin McKidd, and Jesse Williams…) was one of the most pleasant experiences I’ve ever had on set. Professional, kind, talented, all of them.

5. You’ve done a fair amount of Shakespeare. Does The Ferryman feel at all Shakespearean to you? Are you using similar tools as an actor or is it mostly in the scope of the writing?
Absolutely. There are obviously the huge, epic, life-or-death/life-AND-death themes that course through The Ferryman that you don’t always get the challenge of tackling in newer plays. And the tools I use in Shakespeare, I completely use with Jez’s play. I think you have to. There is so much in the text. There is a rhythm, a structure, that lives on the page, no matter who is saying the lines. So tapping into that is important. Playing on the lines, staying active through the words you’re saying. It’s so necessary and, in the end, is part of what makes it possible to do this three-hour show every night. It will carry you.

Hurry to see Holley Fain as Caitlin Carney in the Tony-winning Best Play 'The Ferryman' at Broadway's Jacobs Theatre through July 7.

The Ferryman
Best Priced Tickets
Newer
Hear “The Most Beautiful Music Ever Written” & The Real Story of Frankie and Johnny
Older
Watch the New Stars of Broadway's Frozen Perform "Love Is an Open Door", "In Summer", and "Kristoff Lullaby"
Sign up for BroadwayBox Discount Alerts