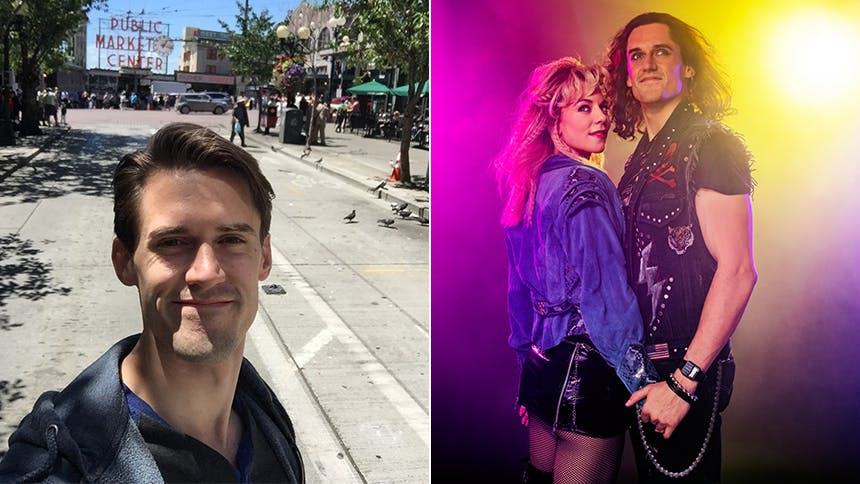 CJ Eldred stars as Drew, the city boy born and raised in South Detroit who moves to LA to become an '80s rock legend, in the off-Broadway return of the Tony-nominated musical Rock of Ages. His performance is charming and funny, and he melts audiences' faces with his badass vocals.


BroadwayBox gets to know CJ a bit better below as he talks about living his rock star dream in Rock of Ages, notable survival jobs, and what he was like 10 years ago when Rock of Ages first opened.

1. Which moment during Rock of Ages are you living your best life?
Definitely during “I Wanna Rock”. Every epic rock music video daydream of mine comes to life.

2. What’s it been like to navigate the die-hard ROA fans? Any memorable fan interactions yet?
They’re great! I met most of them before we even started previews. I think they know the show better than I do—haha. Sometimes they finish my lines before I can.

3. Drew is a Midwestern guy who follows his dream to LA and takes a job at a bar. Tell us about a survival job you had that before breaking into musical theatre.
Wow, I’ve had so many. Definitely was a bartender at a restaurant in SoHo; I also catered, sang in a wedding band, and was a personal trainer.

4. This is the Rock of Ages’ 10th anniversary run. Where were you 10 years ago? What were you like in 2009?
I was a junior/senior at Ballard High School in Seattle, WA, where I was born and raised. I was a captain on the football team, I loved pop tarts, and Jimi Hendrix.

5. What’s your favorite memory from Desperate Measures?
Any time Nick Wyman would randomly pipe up with a hilarious snarky comment. Also, his eyebrows. They’re full of unforgettable moments.

6. Tell us a memorable audition story.
I’ll never forget flying into New York my junior year of college to audition for The Book of Mormon. I was so terrified and had only been to New York once before with my family. I didn’t even know what Ripley Grier was.

7. What’s a movie you love so much you know every single word?
Ace Ventura: When Nature Calls. And The Princess Bride. And all the Lord Of The Rings movies.

8. What was the early role or performance that gave you the confidence to pursue musical theatre professionally?
Playing Archibald Craven in The Secret Garden when I was a high school senior was really inspiring for me. It was the first time I got to play a really complex character and I LOVED it.

9. Rock of Ages has so many incredible ‘80s covers. If you were to release an album of covers, which artist would you cover and why?
I would want to cover David Bowie. I just think he’s a complete artistic genius.

10.  What’s your relationship like with your Drew wig? Have you named it? What do you love and hate about it?
We have a very complicated relationship. She can be a very frustrating lady, but she also makes me the Drew I am today. And her name is Guinevere. Can’t say why but it feels right.

Rock of Ages
Hot
Discount up to 20%
Newer
Jim Walton Takes on Seven Questions About Come From Away, Merrily We Roll Along and the Most Joyful Stage Experience He's Had So Far
Older
Check Out These Stunning 1776 Character Portraits from The Muny
Sign up for BroadwayBox Discount Alerts