Jim Walton Takes on Seven Questions About Come From Away, Merrily We Roll Along and the Most Joyful Stage Experience He's Had So Far 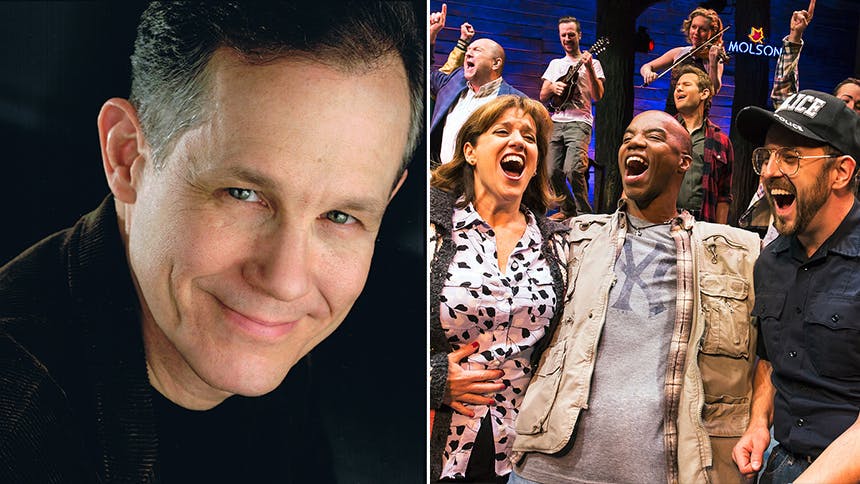 Jim Walton co-stars as Nick, Doug & others in the hit Broadway musical Come From Away

. This is the 13th Broadway show for Jim, who made his debut in 1980 in the Frank Loesser revue Perfectly Frank and whose credits include Broadway's Merrily We Roll Along, The Music Man, Sunset Boulevard, She Loves Me and off-Broadway's And the World Goes 'Round and Closer Than Ever. BroadwayBox caught up with Jim to discuss joining Come From Away, why the audience is his favorite part of the show, and the stage credit that brought him the most joy.

1. A lot of the Come From Away cast has been together from the show's start. What was it like for you jumping into this company?
Frankly, it was nerve-racking. It caused me a great deal of anxiety—not because of the cast. The cast is lovely, and generous, and kind. It was more going into a hit show. I have never replaced on Broadway, and certainly not into a hit show. And, as you know, it's very much an ensemble piece that I knew I would be rehearsing on my own. So, I knew it was going to be challenging to learn it all and get all that information, but it ultimately happened.


2. Did they make you kiss a cod or any other initiation? Did you meet the married couple you portray onstage with Sharon Wheatley?
No, they didn't screech me in. But I knew a few of the people going, and they were all so gracious and welcoming. And yes, I spoke with Nick and Diane in a Skype conversation. It was pretty wild. Nick found me on Facebook, because news travels fast in the Come From Away family, and he reached out to me, and said, "I’d love to meet you on a Skype call." (This was even before I started rehearsing!) So, I talked to him and Diane sometime in September for a good hour or so and they are lovely and kind.

#TBT to Nick and Diane finding their hearts (and two more beers) in Gander!


3. How is Come From Away different for you than the other dozen musicals you’ve done on Broadway?
There’s so many factors, but I think it's being a part a show that has such profound and pertinent social message and that really resonates in today's world. Now mind you, about ten of those other twelve Broadway shows I did were revivals, and I loved those shows, and I am a big fan of revivals. But it's different. This show is different, and to be a part of that world and to reach an audience so profoundly has great meaning to me. I often tell people at the stage door afterwards that my favorite part of the show is meeting people afterwards, because I see what effect the show has had upon them.


4. You’ve had a few prominent understudy and standby gigs on Broadway. In your opinion, what do most people not understand about the role of a Broadway standby or understudy.
Again, I hate to keep coming back to anxiety and stress, but there's a great deal of stress that comes with that position. A standby or an understudy sometimes doesn't know when they're going to be on until half hour before curtain—or as it happened to me once in The Music Man revival, I found out in the middle of Act I that I would be going on as one of the characters at the top of Act II, because he was sick and could not continue. So, it can be daunting to have all that knowledge in your head and not be able to exercise it on stage. It's just stressful and it's not my preferred thing. As a matter of fact, I am vowing now that I'm done understudying in my career. I might eat my words later, but I really have no desire to do it again.

5. Now for a Merrily question. Merrily We Roll Along seems to only grow in cult status. As the years go on, it becomes more beloved. What’s the question friends and fans ask you the most about that show and experience?
Oh, gosh, I think for those who didn't see it, who just listened to the recording, they want to know what happened with Merrily and why didn't it run? People don’t understand why it wasn't a big hit. And it's hard to explain. It's conjecture on my part. A lot of people say it’s the retrograde—the going back in time—but I don't think it's that. I think that makes it fascinating. I think it was casting in large part. I think it was hard for people to grasp these young people playing cynical mid-lifers. But, that's my take. I was 26 years old; I didn't know how to play a divorced, cynical man who had given up on his dream. I just didn't have any wherewithal to know how to play that except to say here's my guess at it.

6. What was your favorite memory of touring Hello Dolly! as Corneilus Hackl opposite Carol Channing?
Well, it was only six weeks, and she was a legend even then. She was very kind to me. I didn't spend social time with her, but she was generous. She gave me a Hello Dolly! wrist watch. I do remember one moment before the song “Dancing”, she was at a loss for words, which was odd because she had done the show a few thousand times. And, I remember, she just paused and looked at me, and I said something like, “I believe you were going to teach me how to dance Mrs. Levi.” And she was like, "Yes! That's right.” Then, she was back on track. She was a rock star.

7. 13 Broadway musicals, some iconic off-Broadway shows, and a few star-studded concerts. Which has been the most joyful stage experience you’ve had so far in your career and what made it such?
Wow, there's so many. I guess it would be Follies in Concert at Avery Fisher Hall. [Jim played Young Buddy in the 1985 Lincoln Center concert.] To be with those legendary stars singing a legendary Stephen Sondheim score with that huge New York Philharmonic orchestra, and especially to hear and actually feel the thunderous ovation from the audience. It was mind-blowing at age 30 to be a part of that world. How did this happen to me? I just felt so lucky to be a part of it and just so blown away by the rapturous ovation for everyone. So that's one, but I could probably list twenty for you if we had the time.


Don't miss Jim Walton in Come From Away at Broadway's Schoenfeld Theatre.