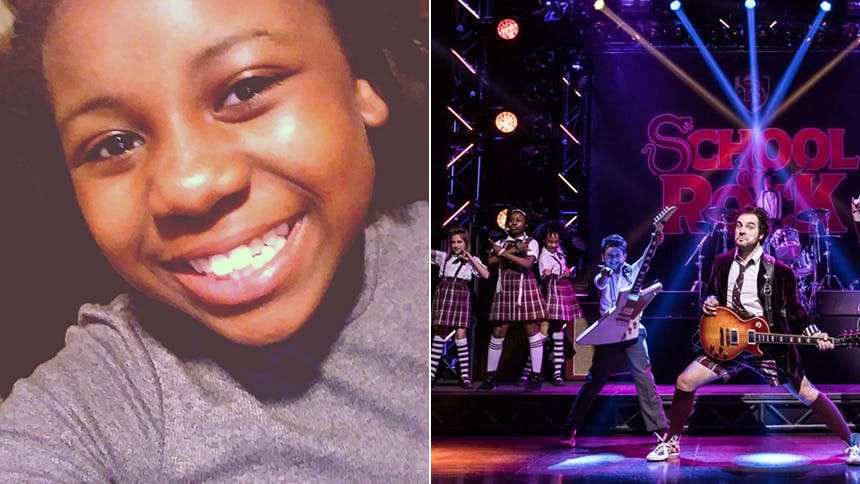 . When she finally takes the spotlight, Amadi's voice leaves Broadway audiences cheering for more, and her moves and attitude during the big finale make her a mini-Beyonce you can't take your eyes off of. BroadwayBox caught up with Amadi to talk about how she relates to Tomika, her dream of playing Aretha Franklin, and why her debut album would be called "Black Pearl".

A post shared by Amadi Christine Chapata(@theofficialamadichapata) on Dec 11, 2016 at 9:52am PST


1. What was your audition process like for School of Rock:
My audition process was kind of funny because I was staying at a friend's house for a sleepover, and then my mom called and said, “Hey, I am coming to get you so you can make an audition video.” I'm like, “Wait Mom, what? I'm in my PJs!” She was like, “Look I'm coming to get you now!!!! I will bring you back when we're done.” So she picks me up, we rush home, and she tells me I have to upload a 60 second video singing a gospel song. So I sing my favorite song of all time, "Rise Up” by Andra Day. After we're done, my mom takes me back to my friend's house, and I think nothing of it. On presidential election day, my mom went to vote with my auntie, and my mom left her phone in the car. When she finally got to her car, her phone was blowing up. They were inviting me to New York to come audition. On November 14, 2016 I did my face to face audition. On our way home on November 15, we received the call in a Burger King, and the staff was so kind. They gave me free cookies! I guess that was my first free perk as a Broadway actor.

2. What do you love and relate to about Tomika:
Most people wouldn't believe it because most would describe me as outgoing and sassy, but I totally relate to Tomika. We move around a lot because of my mother's career in the theatre industry, so I found myself as the new girl a lot. Even though I can be very outgoing, I can also be very shy. I think they have a word for it: omnivert. I really feel everyone has a little Tomika in them. I believe we all have insecurities and uncertainties. We all need somebody like Dewey Finn to just believe in us and push us to be best we can be. I love the levels and the process she goes through in the show only to reveal the dynamic diva she really is. I am truly empowered by this role and I'm blessed to have the opportunity to bring her to life night after night.

3. Who inspires you as an artist and a singer:
I know this may sound cliche, but to be honest my mother has truly inspired me as an artist. Truth is, I don't know nothing but the theatre. In fact, I was born my mother’s senior year of college when she was pursuing a degree in theatre. She always exposed me to theatre, and even during tough times she never gave up. She would always tell me to appreciate the journey. I would always watch her perform and something would touch me deep in my soul. I mean, it was something I couldn't explain. All I knew is I wanted to be just like her. My mother has a major respect for theatre, and she instilled in me that same respect and discipline. Every voice lesson and acting class I have received has come mostly for her. I can talk about her all day. I'm just so very proud of her, but if I have to mention a well known celebrity it would be Whitney Houston and Michael Jackson.

4. What was the moment you first knew your voice was special:
I would have to say when I performed in my elementary school talent show. I was only in the 1st grade, but I took home 1st place. I performed Michael Jackson's "Who’s Loving You." I still watch it on YouTube from time to time.

5. What would you call your debut album if you released it right now:
Wow, that's actually a tough one . I guess it would be "Black Pearl". Funny thing is I just learned about pearls in my science class, and my teacher said you would have to kill hundreds of wild oysters in order to find one pearl. I thought that was amazing because often people are bullied for being different. Then she taught us about black pearls. I never knew there were black pearls, and after googling black pearls I found they are formed when a piece of sand gets trapped in the body of a specific type of oyster called the Tahitian black-lipped Pinctada margaritifera. Black pearls are rare and symbolize wealth, prosperity, and wisdom. I would call the album "Black Pearl" because my songs would inspire people to find the beauty in rarity and uniqueness. I want to spread positive vibes around the world.

6. What movie do you love so much you know every single word:
Ok that's an easy one . Mean Girls!!!!!! I absolutely love that movie. I always tease my mom because when she comes to see School of Rock she dances with us to all the songs, and I tell her she reminds me of Regina's mom when she was dancing with them at the Christmas talent show.

7. What’s a role on your Broadway Bucket List, you’d love to play when you’re older:
If I'm totally honest it's really not a specific role , but it's really what type of role. I would love to do an autobiography full of music and dancing. Maybe Aretha Franklin or Gladys Knight. I know I'm a old soul, but seriously, that would be awesome.

8. What do you miss most about life in Georgia & what do you like most about NYC so far:
The main thing I miss back home is my family. Like I said, I moved around a lot, but I always had my family. Being so far away is sometimes hard, but they are all cheering for me , and they visit often. Second, I would have to say the space, or should I say, elbow room. Everything in New York is so compact.

On the other hand , there is nowhere in the world like New York City. I love that there are some many things to do. I love the Museum of Natural History, and the ferry rides. The food is absolutely amazing, and let's not start with the fashion. I love shopping in NYC. Lastly, it is absolutely beautiful around the holidays. The city definitely gets you in the Christmas spirit.

9. What’s your go-to song to sing at auditions:
“Rise Up” by Andra Day. I love the song because it definitely showcases my voice. Not to mention the lyrics bring out the tiger in me: I feel like I can do anything. Even if I'm not feeling my best it brings the fighter emotion out. Not in a negative way, but it allows me to inspire myself as well as others—or should I say, the casting directors. I guess I want to make them believe in me.

10. What are three things you love that have nothing to do with singing and performing:
Outside of performing, I love making things using science and math. I know several ways to make slime with different consistences, ingredients and colors. I also enjoy reading, and I can swim very well.

School of Rock - The Musical
Best Priced Tickets
Newer
15 Musical Moments That Made 2017 So Memorable
Older
Kaitlyn Bristowe Takes On Seven Questions About Home for the Holidays, Broadway vs Bachelorette, & Christmas in NYC
Sign up for BroadwayBox Discount Alerts